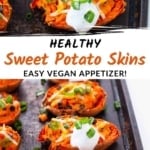 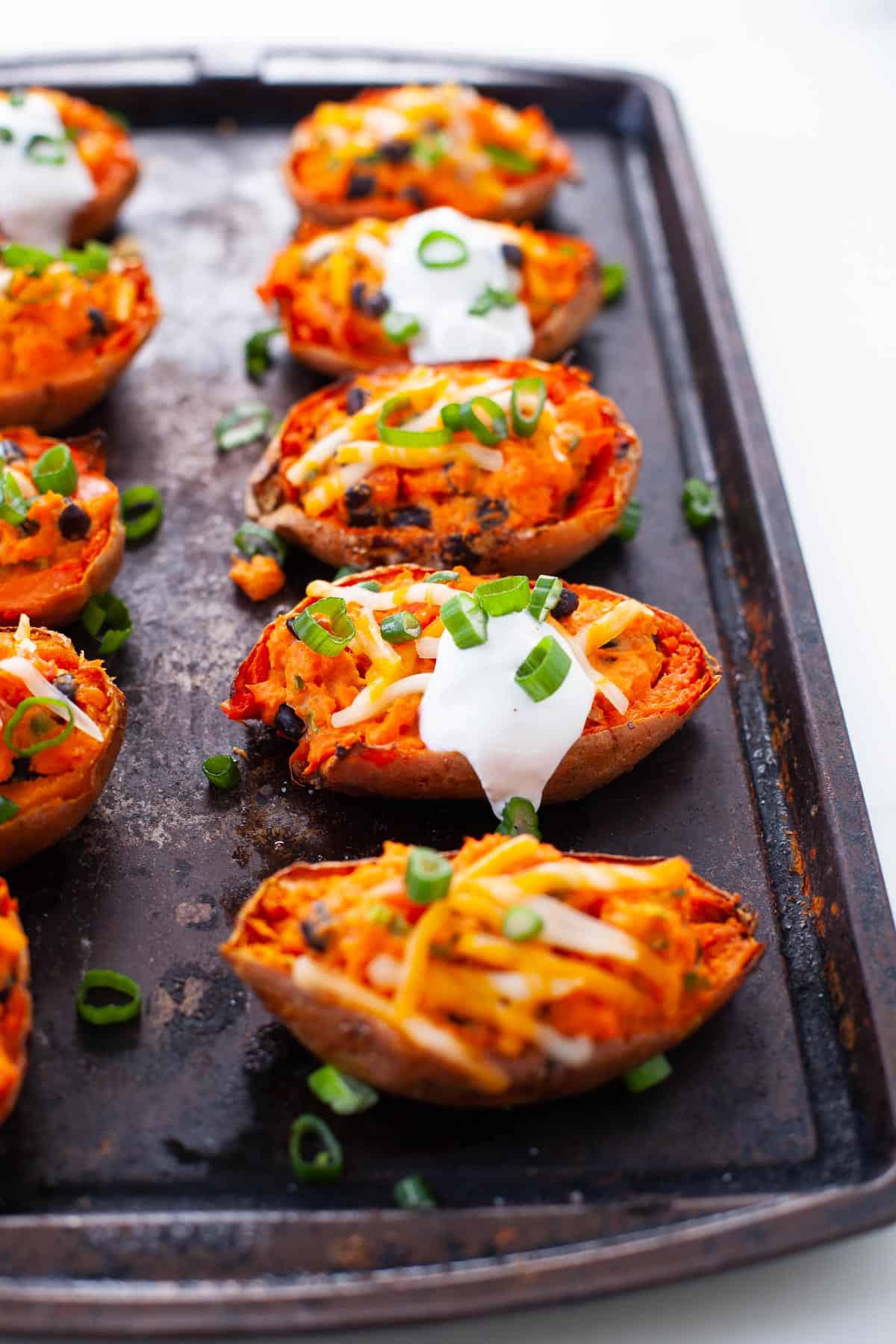 Love potato skins but struggle to find a plant-based version? I feel you.

When I was vegetarian, I really missed potato skins and that’s what originally inspired this recipe! Plus, my vegan loaded sweet potato recipe has always been a reader favorite so I figured these would be a hit too!

This recipe recently got a makeover because it had been a minute…or six years since I originally published. This version is much easier to make, requires way less ingredients and costs way less to make. And…wait for it…it’s just as delicious. Or, in my humble opinion, even better than the original!

These sweet potato skins are perfect for vegetarians, vegans, or those just trying to eat more plant based. The crispy skins are packed with creamy mashed sweet potato, black beans, diced tomato, and jalapeño for a little heat! Topped off with sour cream, green onion and some melted shredded cheese if you wish.

These are the perfect appetizer for game day. And being in the middle of playoff season (GO BILLS!), there’s no better time to make them.

For a quick step-by-step, check this recipe out in Web Stories! 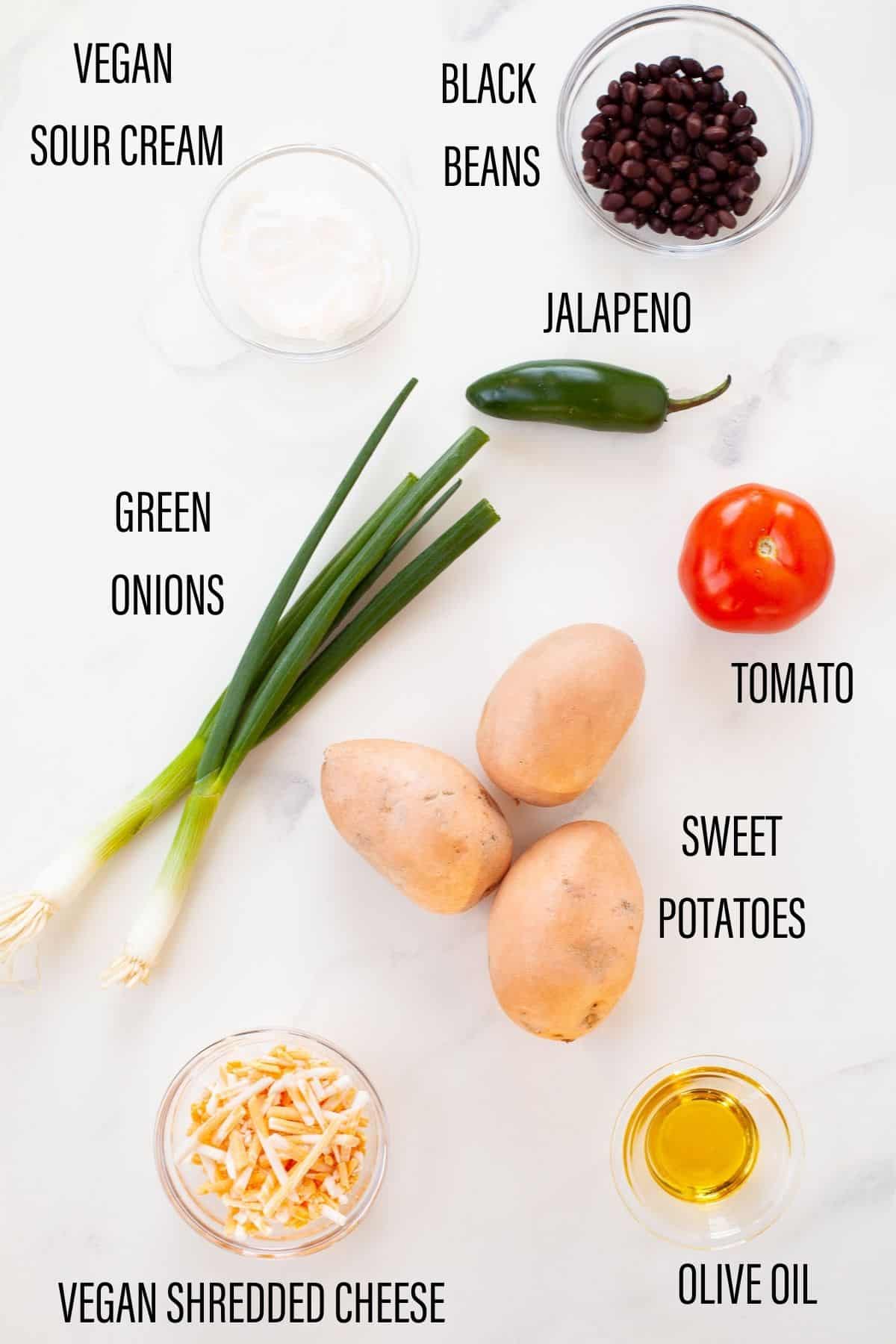 Sweet potatoes: Try to look for small potatoes so they are more appetizer friendly. Plus, this will help with the ratio of filling to sweet potato called for in this recipe.

Vegan sour cream: I used store-bought vegan sour cream but I’ve seen some cashew-based recipes out there. If you’re not vegan, feel free to use regular sour cream or Greek yogurt as a substitute!

Black beans: I used canned, drained and rinsed, but you could cook them from dry if you have the time.

How to Make Sweet Potato Skins

Start by roasting your sweet potatoes (whole) in the oven. I like to rub the skins with olive oil and salt before roasting.

Then, cut the sweet potatoes in half and let them cool briefly so you can handle them. A serrated knife works well here so you don’t break the skins!

I like to take a paring knife and cut a 1/4-inch border around the potato and then scoop out the middle. Place the sweet potato flesh into a medium mixing bowl and mash well.

Brush the inside and outside of the skins with more olive oil. This will help them to crisp up! Throw ’em back in the oven for another 10 minutes or so.

In the meantime, add your beans, tomatoes, jalapeño and sour cream to the mixing bowl. Mix with the sweet potato until combined.

Fill sweet potato skins with the mashed sweet potato mixture. Top with shredded vegan cheese if desired. Bake in the oven for another 10-15 minutes or until skins are crispy and cheese has melted. 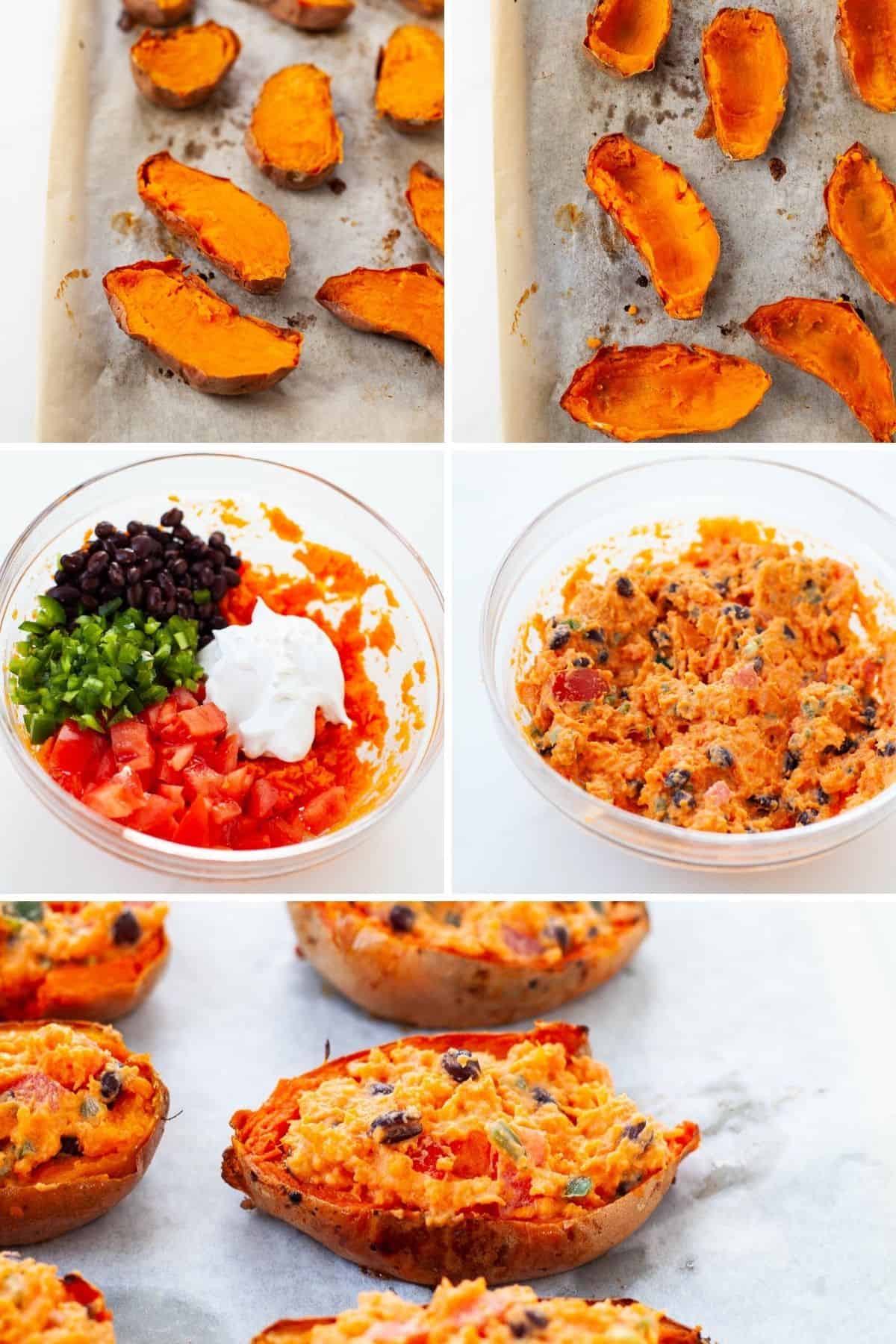 I only have large sweet potatoes. What should I do?

You’ll just want to adjust the other ingredients accordingly – you’ll want to use more sour cream, beans, tomatoes and jalapeño.

Didn’t this recipe used to call for cashew cheese?

Yes! But I found the cashew cheese to be more ingredients and steps to make and I liked this version better (easier on the wallet too!). If you really liked the OG version, mix 3/4 cup cashew cheese with the sweet potato and add any other mixings your tastebuds call for!

How do you make this recipe vegetarian?

You can use dairy sour cream or Greek yogurt instead of vegan sour cream. You can also top with shredded cheddar cheese instead of a non-dairy alternative.

Is this recipe gluten-free?

Yes! But be sure to double-check the labels if you are using vegan sour cream and vegan cheese as some brands contain wheat. 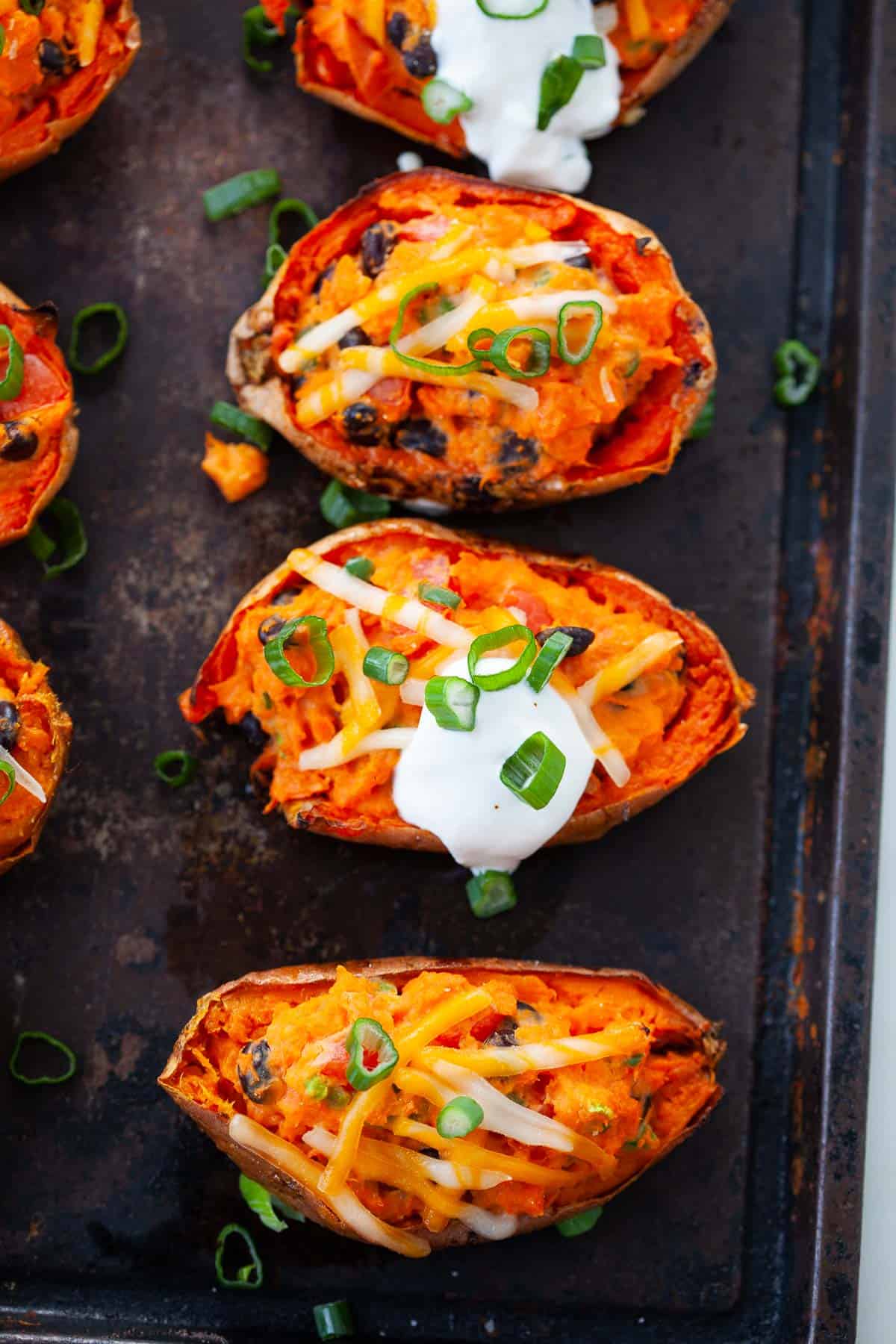 For more game day inspiration, check out my other recipes below! 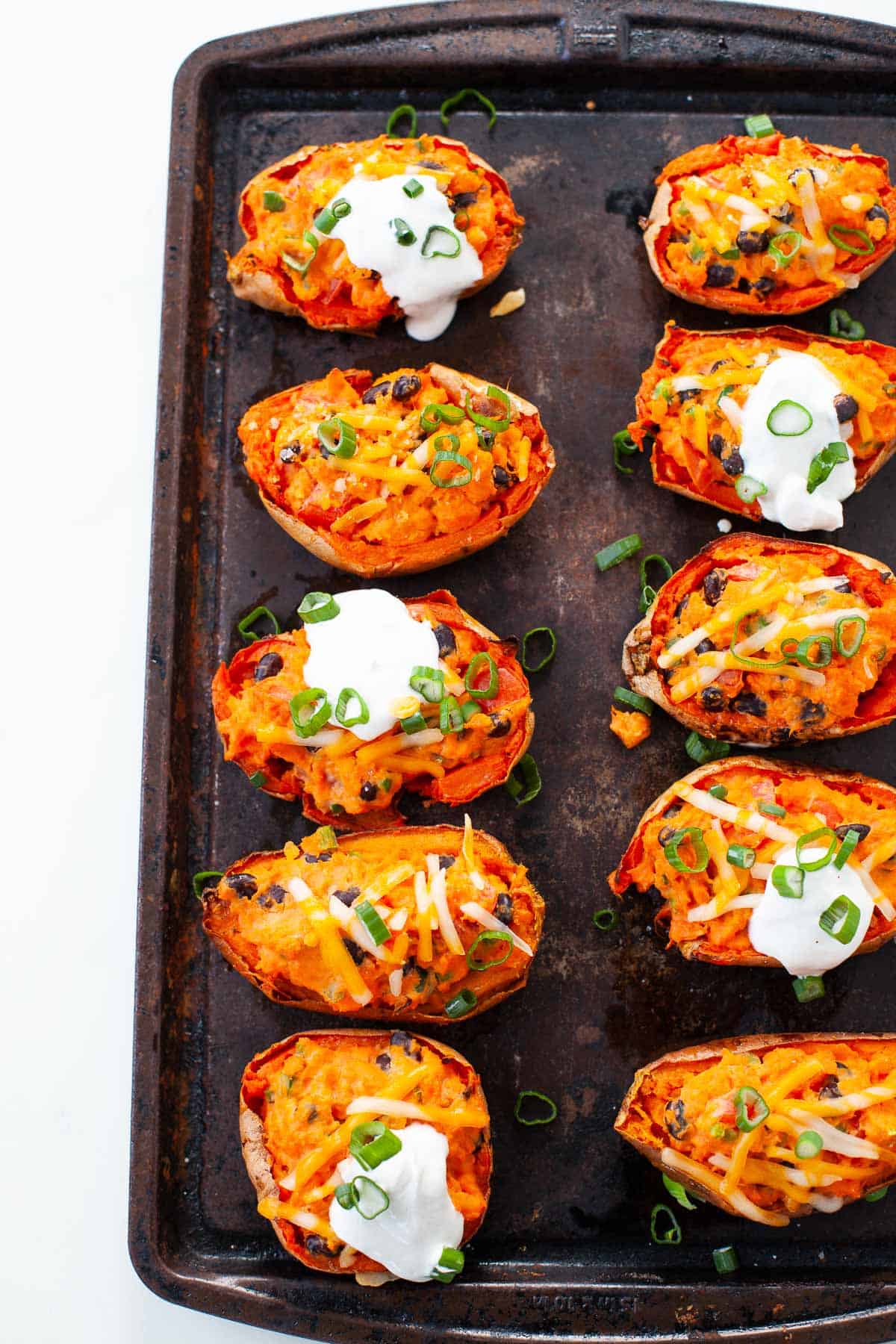 If you like this recipe, please be sure to give it a 5 star rating below. If you make it, share it on instagram and tag me @karalydonrd and I’ll re-share it with my followers! If you want to save this recipe for later, be sure to pin it on Pinterest!

This recipe was originally published in December 2014. It’s been retested and reshot to bring you the most delicious (and beautiful!) content!