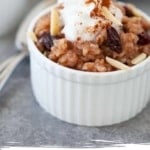 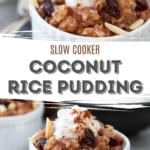 Hands-off rice pudding ready in just four hours in the slow cooker. Made with brown rice and coconut milk, this recipe boasts extra fiber and is vegan-friendly and gluten-free! 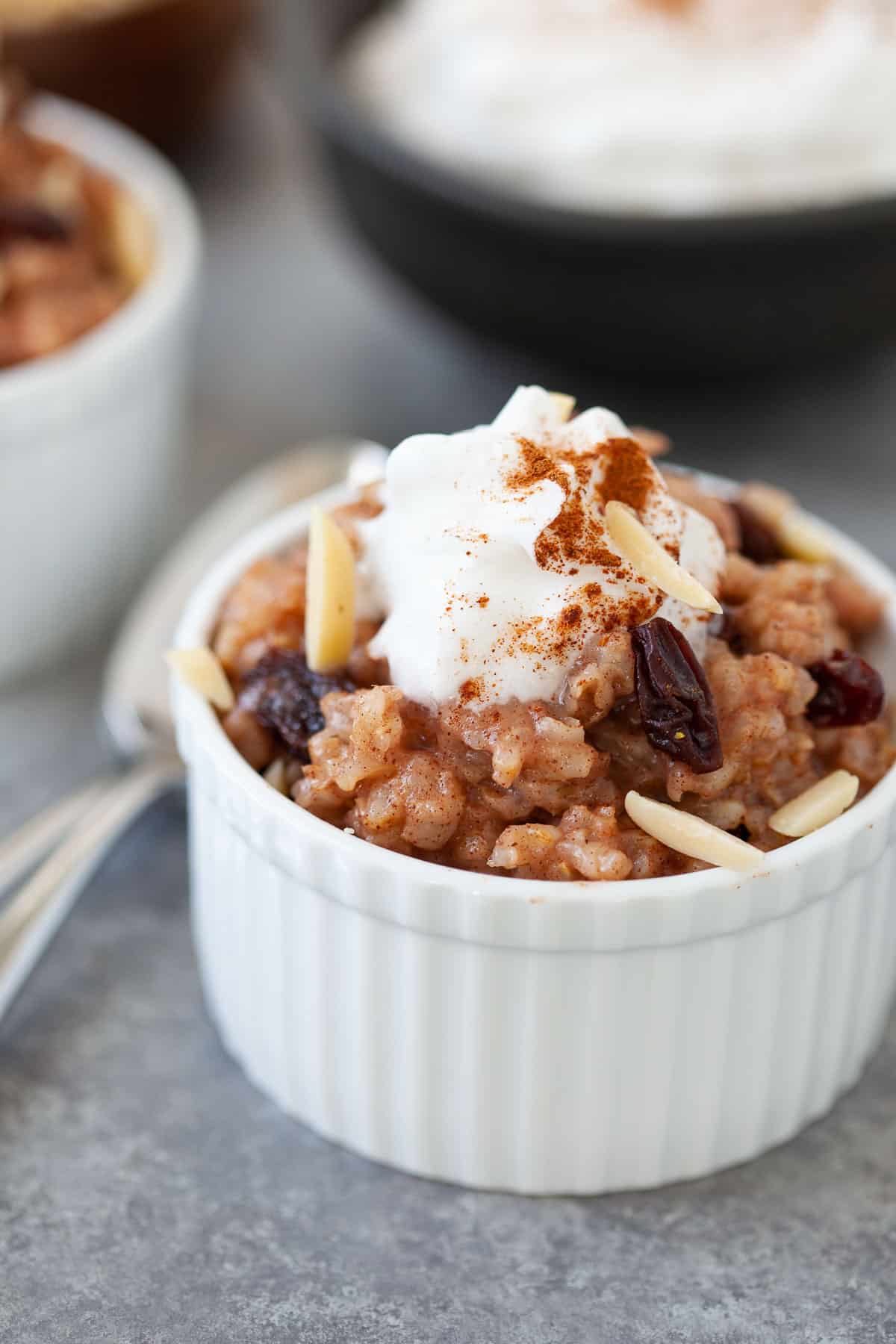 Growing up, my family used to frequent this Greek restaurant that my Dad actually designed (he’s an architect). And besides always ordering the avgolemeno (lemon, chicken and rice) soup, I always used to ask for rice pudding at the end of my meal.

And of course, I always opted-in for the whipped cream & cinnamon dusted on top. This recipe is ode to that fond food memory.

Here’s why you’re going to love it. It only calls for a handful of ingredients and it’s hands-off and ready in just four hours in the slow cooker.

You can set it before you start making dinner and then have dessert ready when you are. 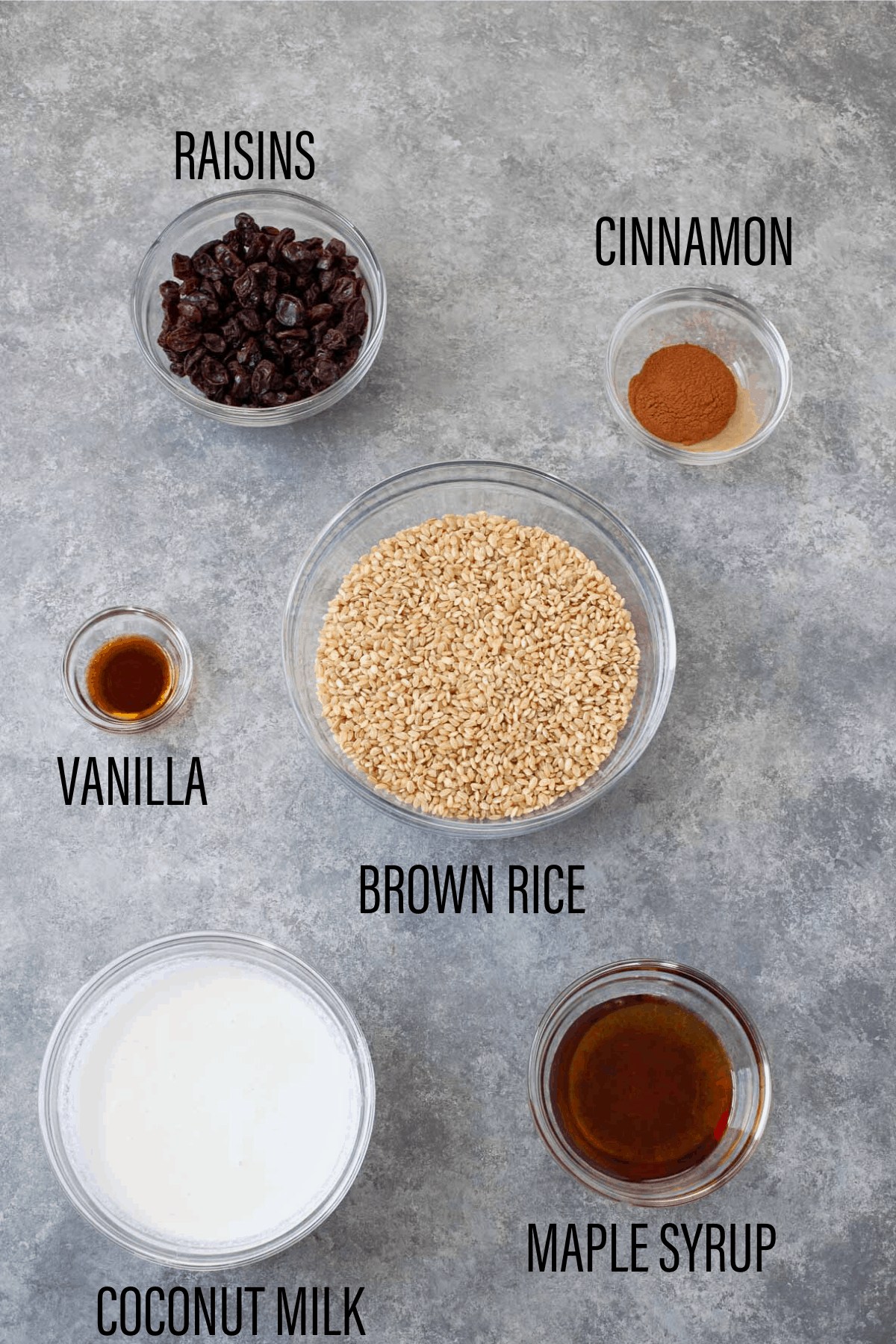 Brown rice: make sure this is short-grain! Short grain is very starchy and so it cooks up soft and sticky, which is what you want in a rice pudding! Versus long grain rice which cooks drier and the grains are more separate.

Coconut milk: be sure to use canned coconut milk for a creamier, richer final product! You can use regular or light coconut cream. Just don’t use coconut milk beverage.

Oat milk: you can use any non-dairy beverage here (or even more coconut milk or water) but I like oat milk and cashew milk the best in this recipe since they’re creamier than other kinds.

Maple syrup: you can use your sweetener of choice here – maple syrup is my preference.

Optional toppings: coconut whipped cream to make it dessert-like and slivered almonds for a little crunch and texture

How to Make Coconut Rice Pudding in the Slow Cooker

This recipe is SO simple it only needs one prep photo! All you have to do is add all the ingredients to your slow cooker except for the raisins, give it a good stir, and set on low for four hours. Stir in the raisins, and voila! 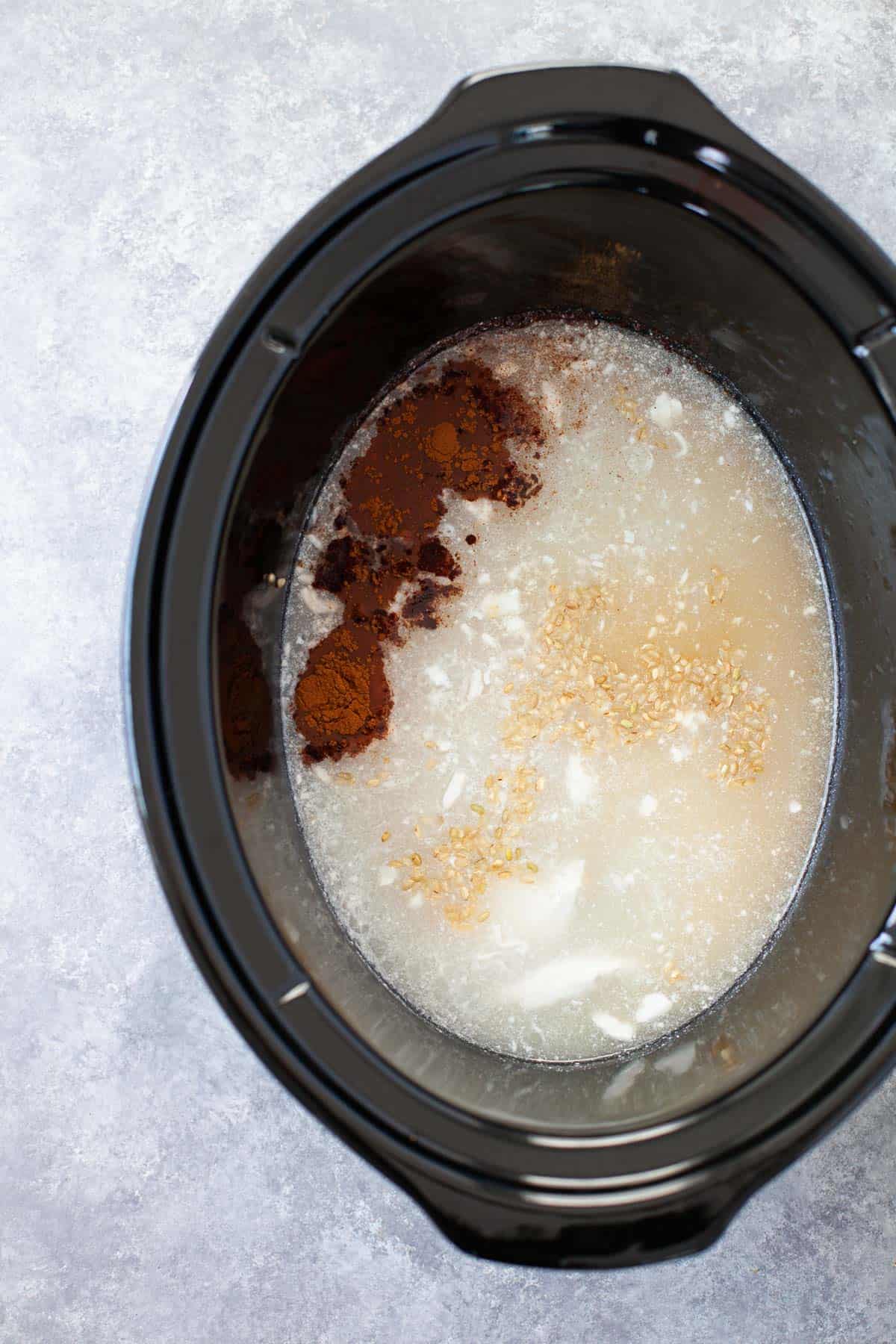 I know it’s crazy to think it’s that easy, right?!

I like my rice pudding to be a little more porridge like (aka more liquid). If you’re the same way, follow my recipe and you can’t go wrong. If you like your pudding to be drier and to be more of the sticky grains (like in the pictures here), use 1 cup less liquid. 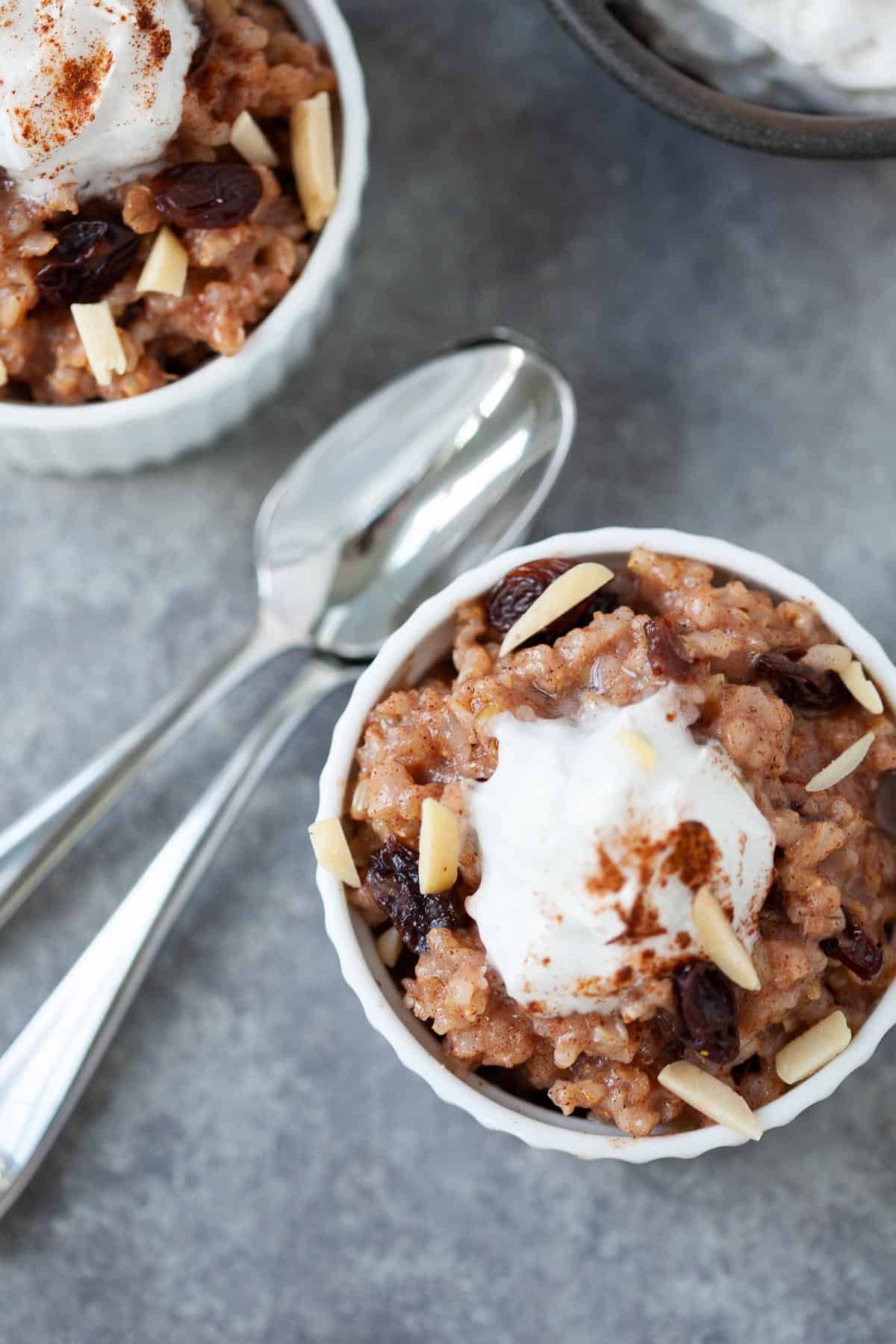 Can I make this with white rice?

Sure! White rice tends to cook faster than brown rice so you may be able to lessen the cooking time to 3 or 3 1/2 hours. Be sure to check and let it cook until it reaches your desired consistency.

Can I make this with regular milk a different type of non-dairy milk alternative?

I don’t like raisins. Can I use something else?

You can leave ’em out or substitute with another type of dried fruit!

Can I make this for breakfast or is it better for dessert?

Whatever strikes your fancy! I would have it for both! But maybe with some Greek yogurt or an egg for breakfast ;). 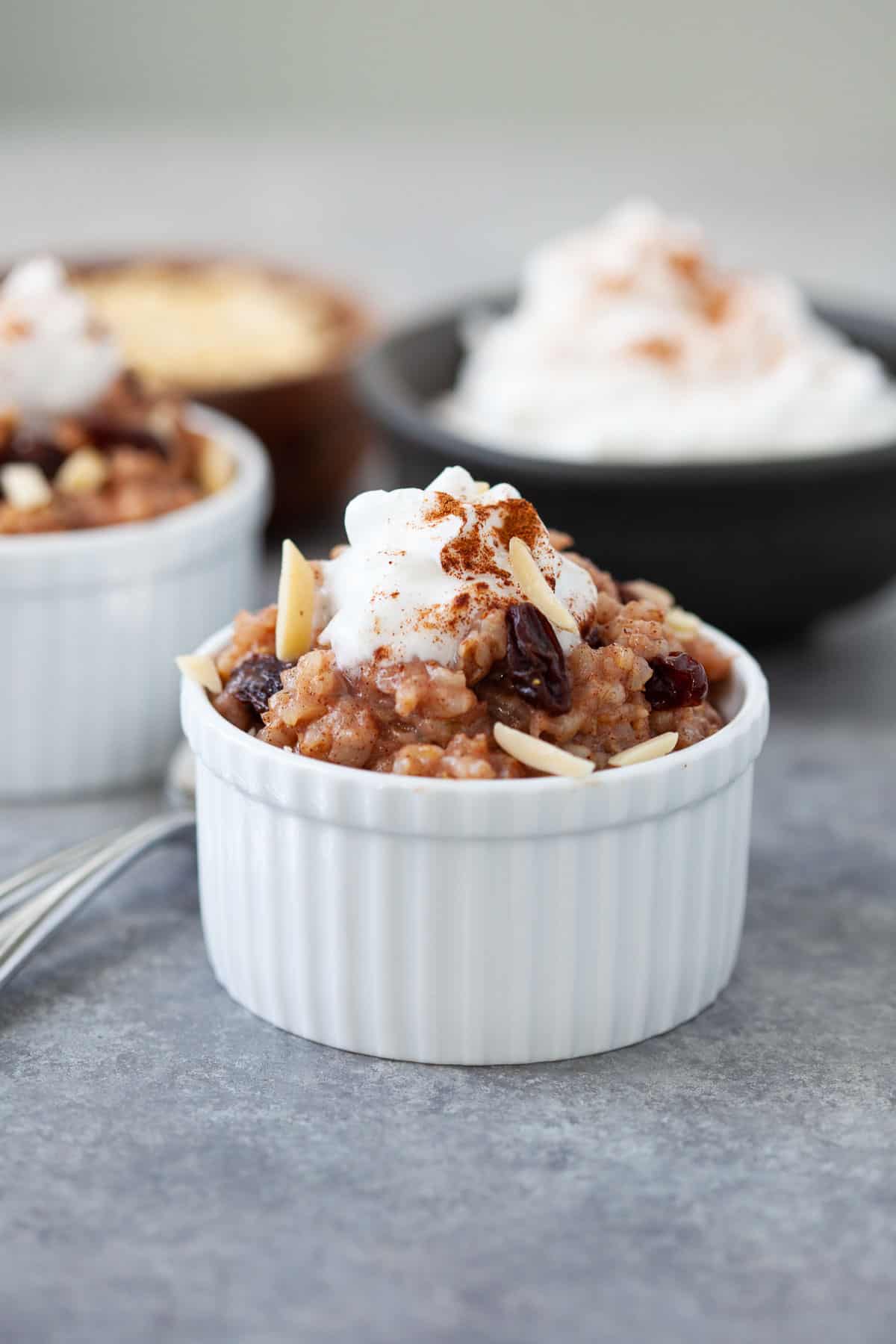 For more of my dessert recipes:

If you like this recipe, please be sure to give it a 5 star rating below. If you make it, share it on instagram and tag me @karalydonrd and I’ll re-share it with my followers! If you want to save this recipe for later, be sure to pin it on Pinterest!

Hands-off rice pudding ready in just four hours in the slow cooker. Made with brown rice and coconut milk, this recipe boasts extra fiber and is vegan-friendly!

This recipe was retested, reshot, and revamped to bring you the most delicious (and beautiful!) recipe. The original recipe was published March 2015.