Home » Travels » What To Do in Paris for One Day

What To Do in Paris for One Day

Sharing a recap of our one day in Paris and how to prioritize Paris when you only have one day to explore!

But if you only have one day, here’s my recommendation: do NOT try to squeeze in all the things. You can’t and if you try to it will take away from your Parisian experience. My suggestion is to pick ONE attraction you want to see. That way you’re not running all over the city missing the beauty that surrounds you. You will want to just simply wander the streets of Paris, taking in all its character. You’ll want the time to enjoy a leisurely cappuccino or glass of wine while sitting at a café.

Realistically, we had like a 1/2 day in Paris because by the time our flight landed in CDG and we took the train to center city, it was already after 1pm by the time we got to our hotel. We stayed at the cutest boutique hotel courtesy of our Expedia points called Hotel La Villa Madame. It was right by the Luxembourg Gardens, which I was thrilled I got to walk through because it was one of the spots I didn’t make it to the last time I was in Paris. 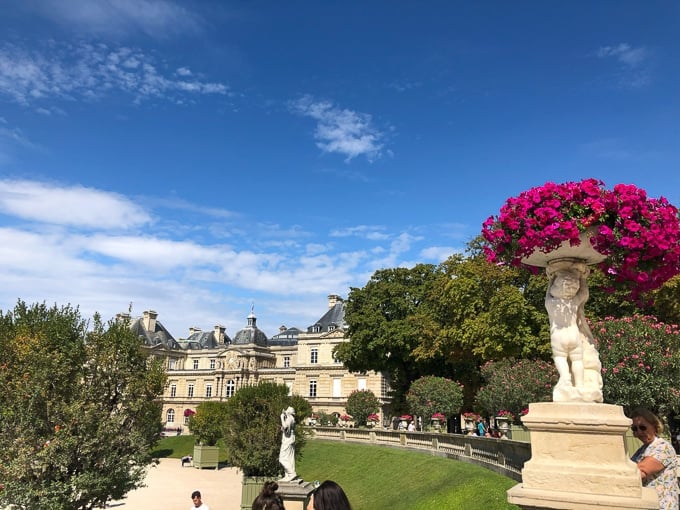 We decided that our main attraction for that day was going to be the Eiffel Tower. One because it was our 3 year anniversary and it felt like the most romantic and quintessential Paris. And two because when I was in Paris last time we visited the Eiffel Tower but we never took the ride up to the top.

And the Eiffel Tower is right by Rue Cler, a neighborhood known for its markets and cafés. So I figured we could walk around there, grab a bite to eat, and grab some snacks (i.e. cheese & bread & wine & macarons) to bring with us to the Eiffel Tower. 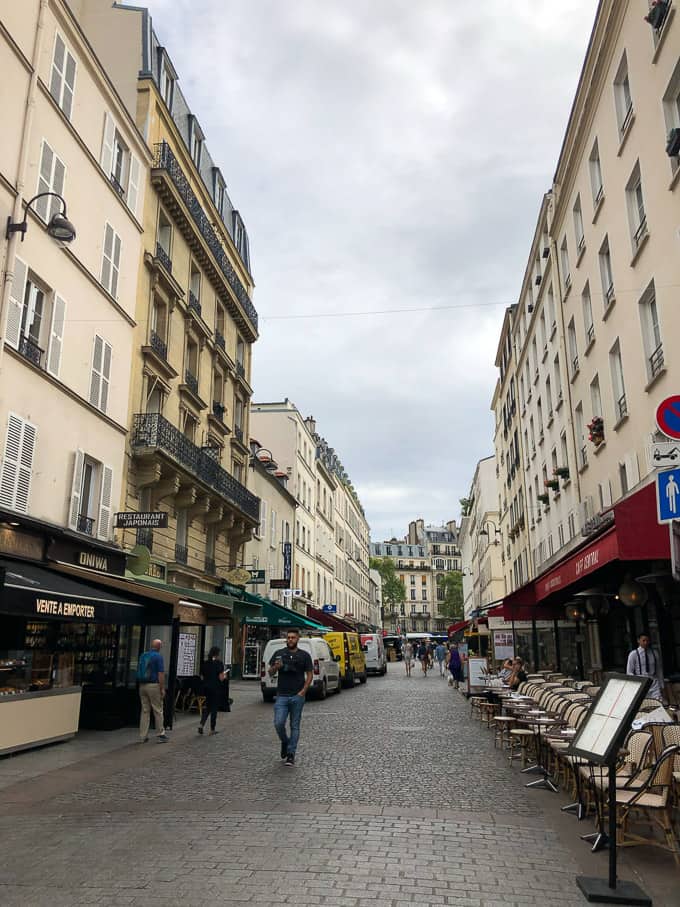 We were both tired from traveling that morning so we stopped at Café du Marche and got some espresso and tea and split a salad with the best baked goat cheese on top. France knows how to do cheese right. 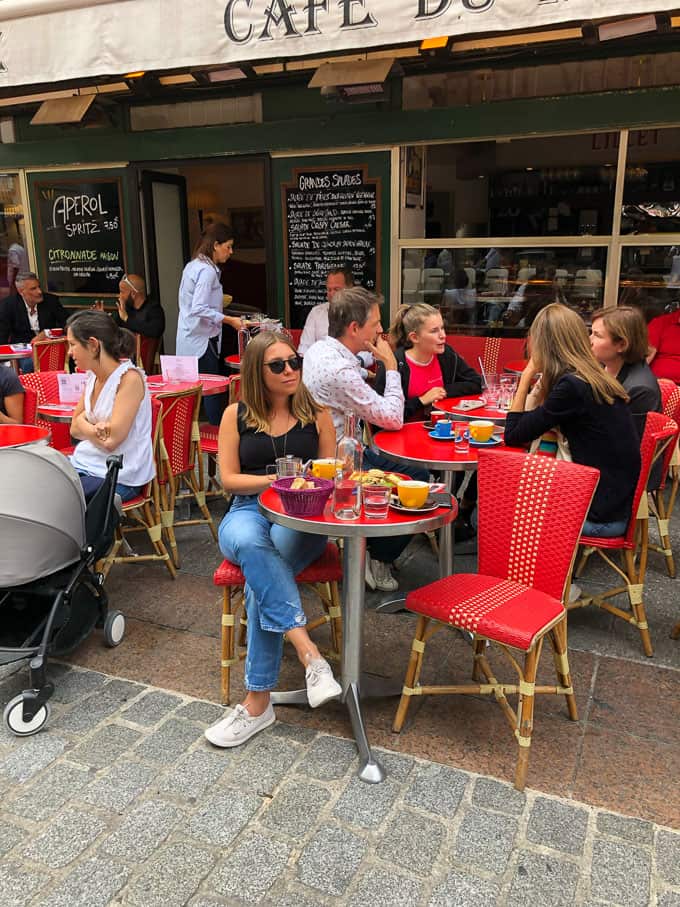 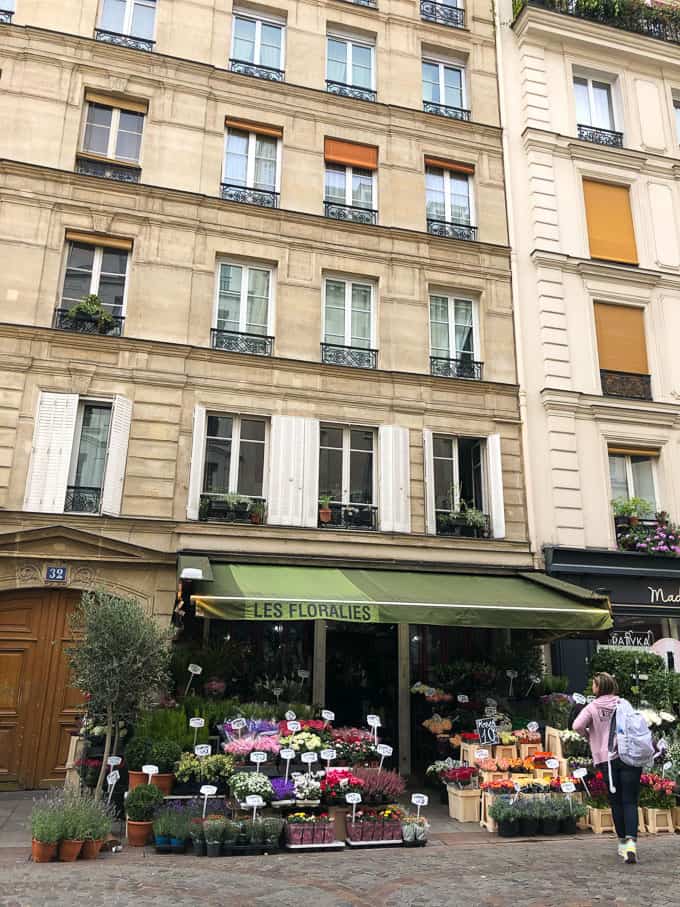 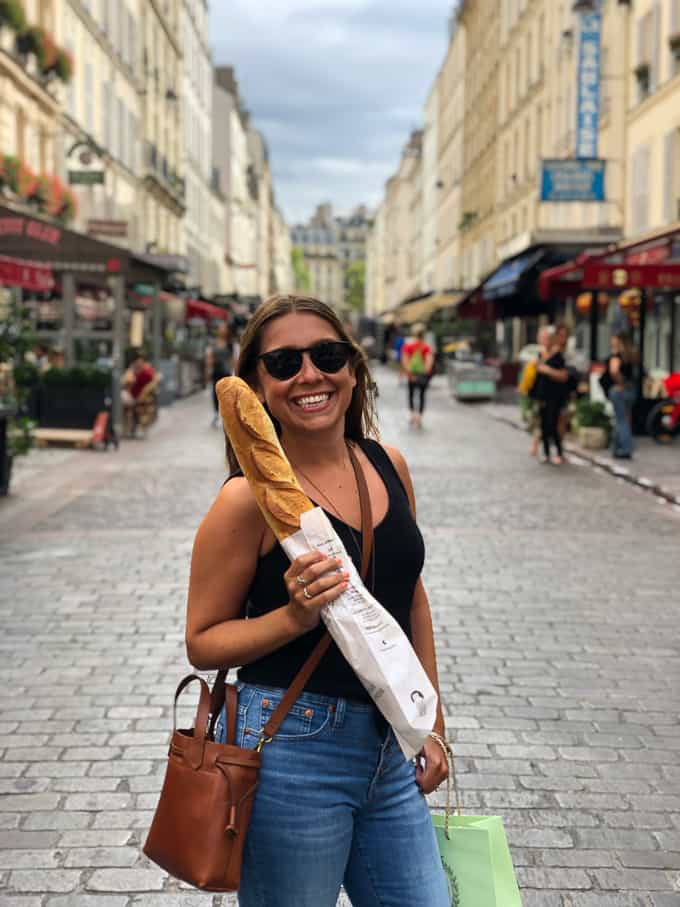 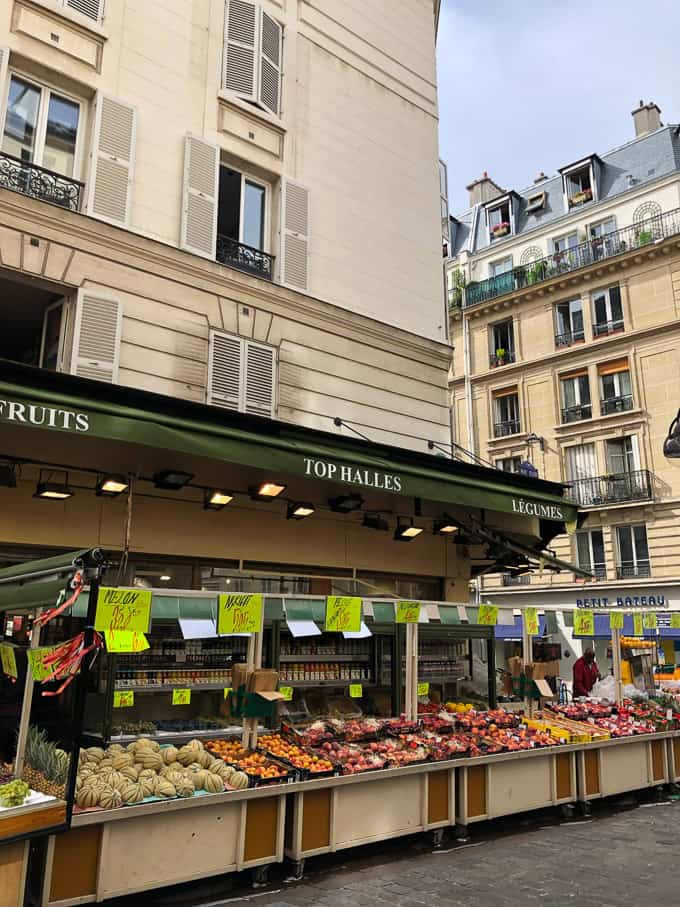 We then passed by a crepe place, Ulysse en Galue, in Rue Cler that I read about and stopped to grab a ham and cheese crepe for us to share. 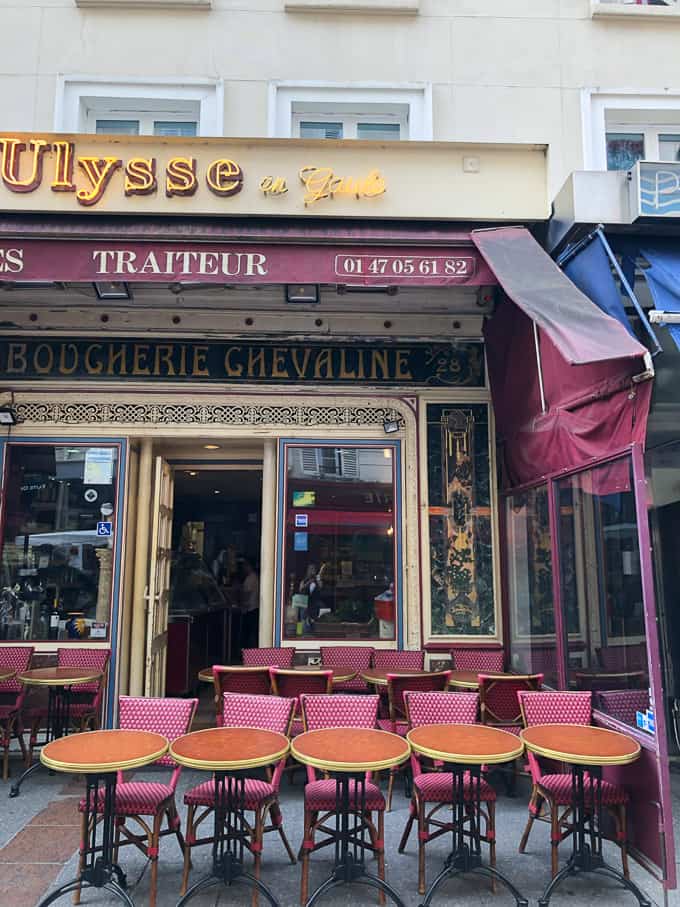 It was warm, buttery, crispy and cheesy. There’s no better feeling than walking the streets of Paris, delicious crepe in hand. 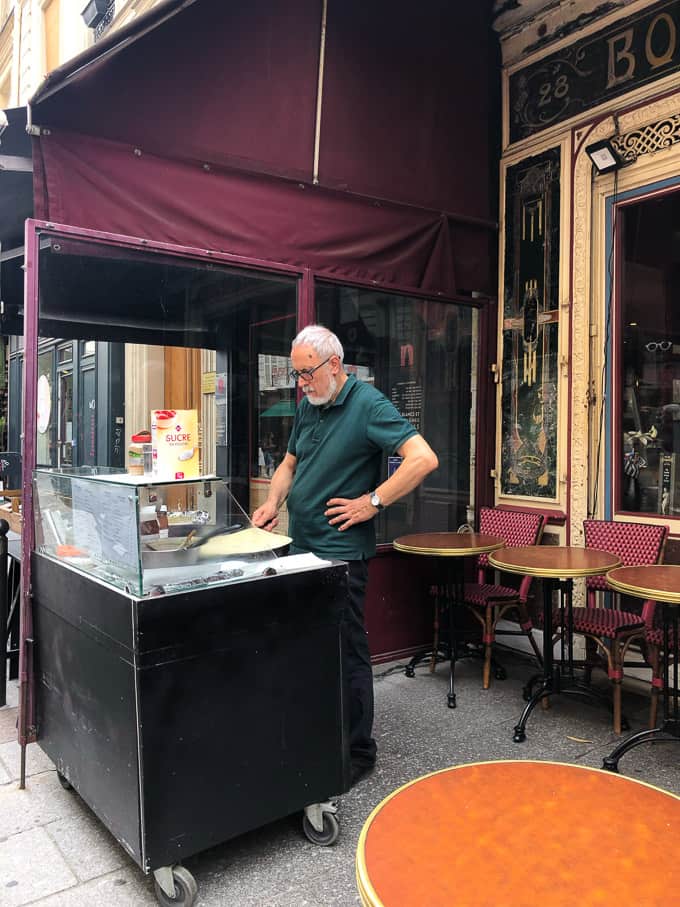 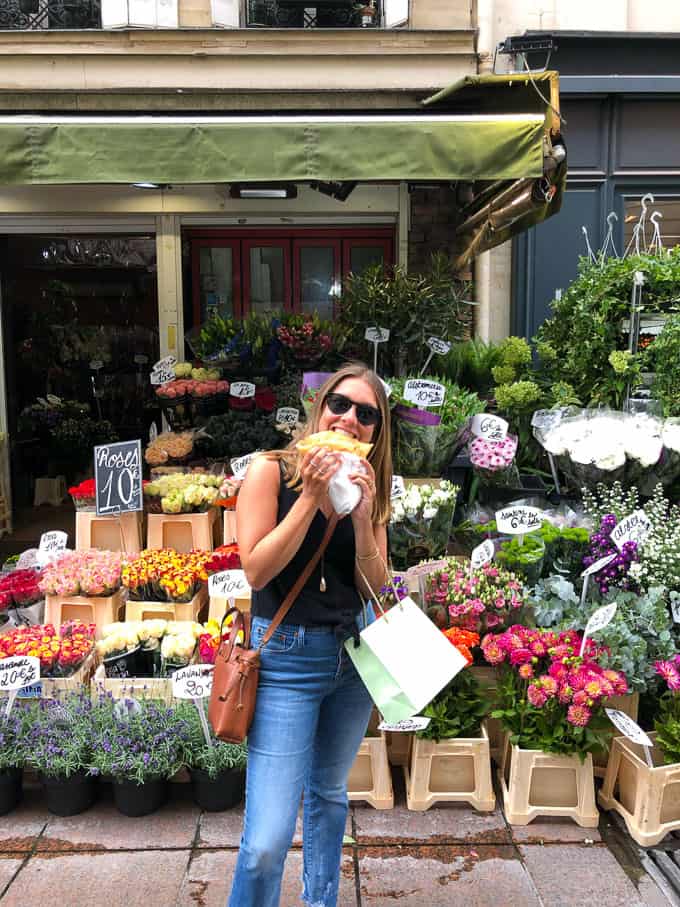 We stopped to get cheese for our Eiffel Tower picnic at Fromager Marie-Anne Cantin, which is like the Cadillac of cheese shops. If you look up top cheese shops in Paris, this one makes the cut. We bought a brie (for me) and a goat (for Steve and me lol). 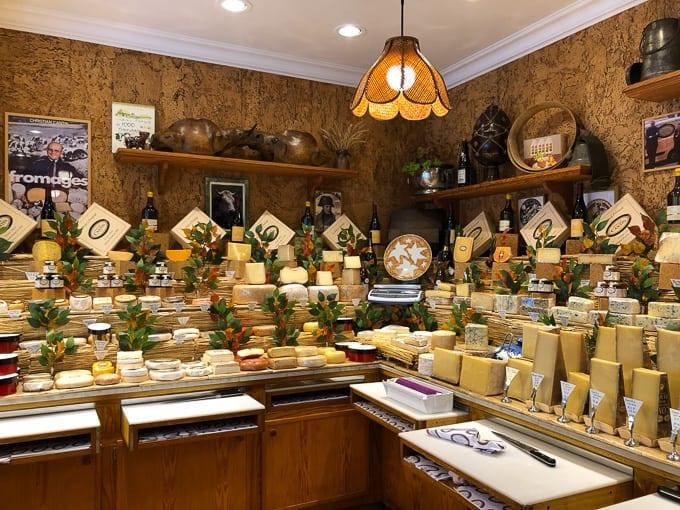 There are signs around the Eiffel Tower saying you can’t have alcohol but everyone and their Mom is hanging out in the park drinking wine so clearly this is not an enforced rule.

Happy three years to us! Couldn’t have asked for a better way to celebrate. 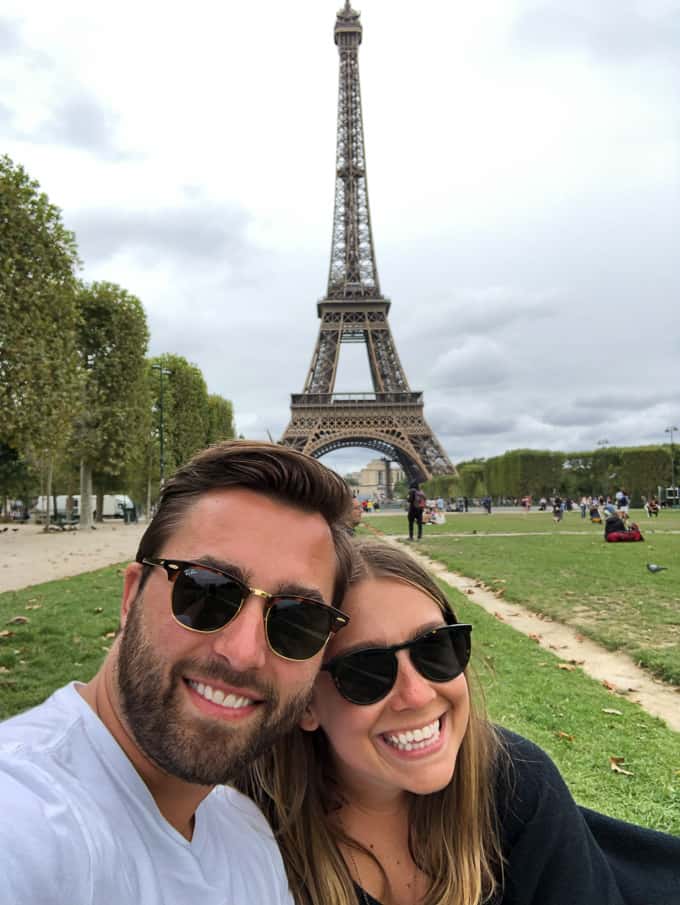 If you know me well or you’ve been hanging around TFD for a while, you probably know I have a fear of heights. So I was nervous to go all the way up to the top of the tower. Luckily, I have a supportive and encouraging husband who helps me face my fears and lets me squeeze his arm to an uncomfortable degree. 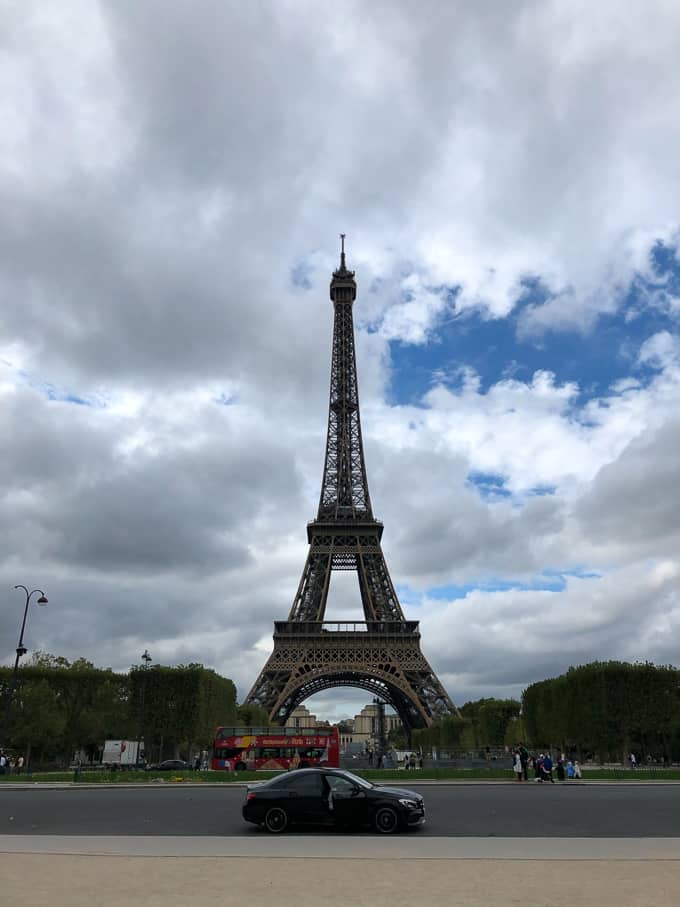 I’m glad he did because the views of the city were 100% worth it. 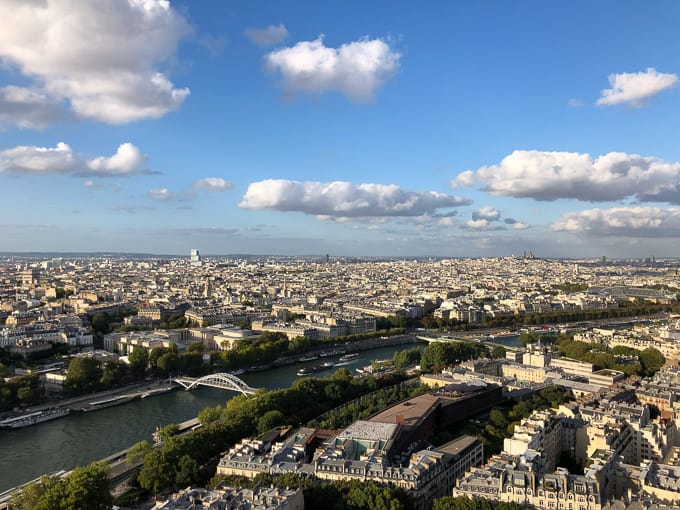 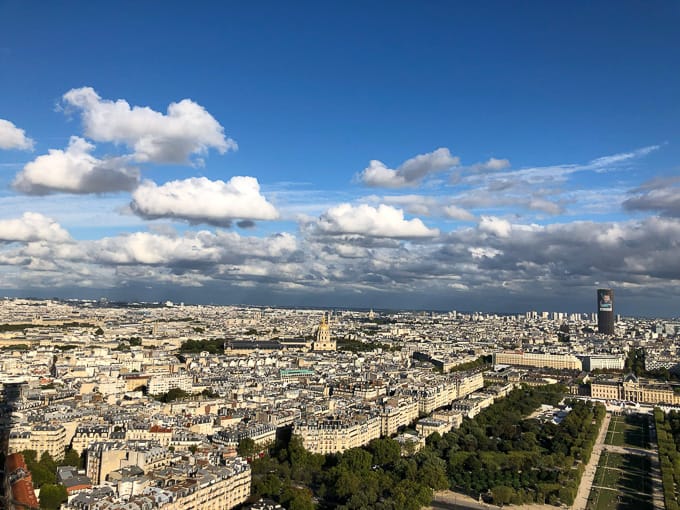 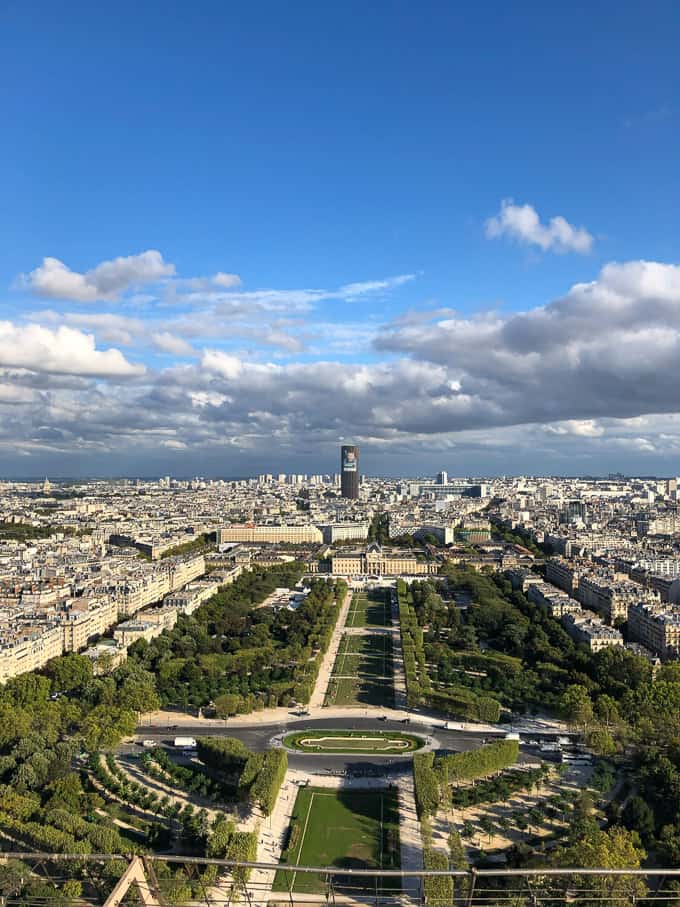 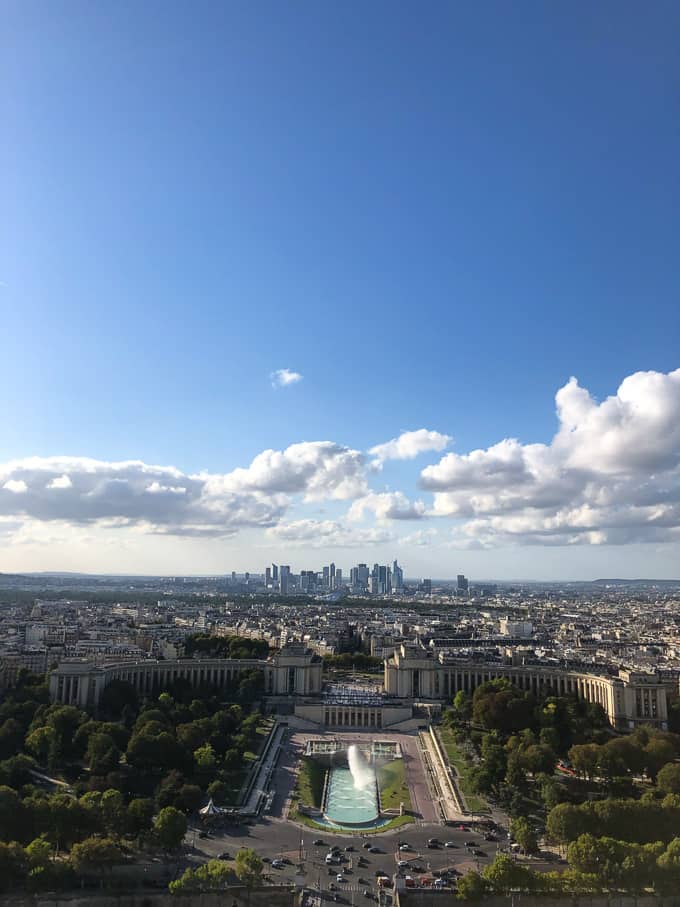 For our anniversary dinner, we went to Frenchie Wine Bar, which I went to when I was there in 2015. I tried to get reservations at Frenchie Rue de Nil across the street but I just missed when they released the reservations for that day and they were booked by the time I checked again. I knew the food was good at their Wine Bar so we arrived there crossing our fingers that they’d be able to squeeze us in (they don’t take reservations). Luck was on our side and we were able to get seated pretty quickly.

They offer a menu of smaller plates, meant to be shared, which is my preferred way of eating bc then I get to taste all the things. Which is why the cover page of their menu speaks to me: “Everything. I want to eat everything.”

We started with the burrata with heirloom tomatoes, granola, and marigold. 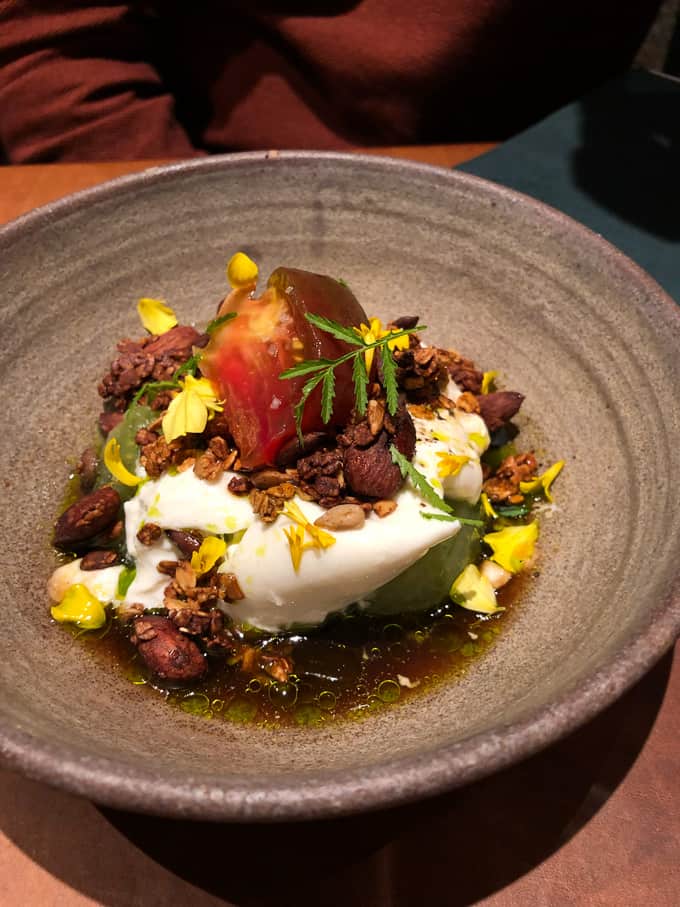 Followed by this pappardelle with lamb ragoût, kalamata olives, and lemon confit. 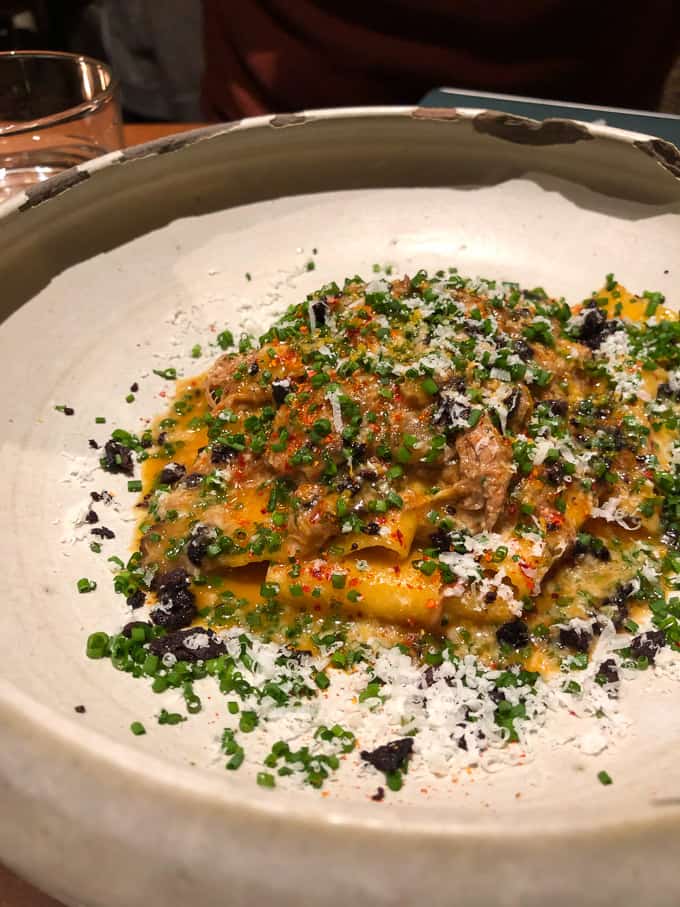 Then we had cauliflower mushroom (which is a type of mushroom, also known as Sparassis) with English cheddar, smoked egg yolk, and walnuts. 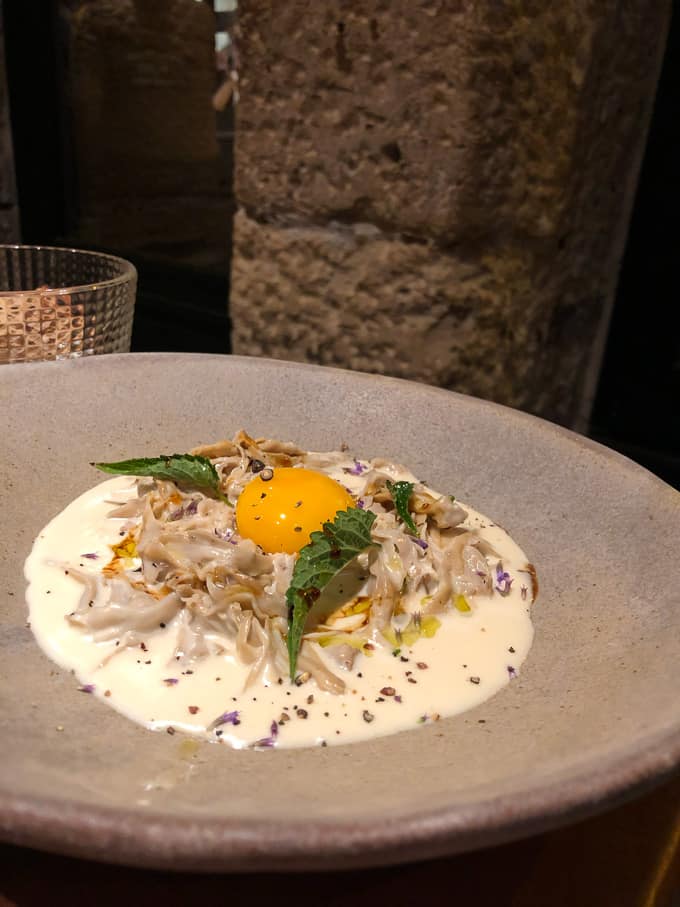 Then we split this wild-caught pollack with cheddar sauce, figs, and new potatoes. 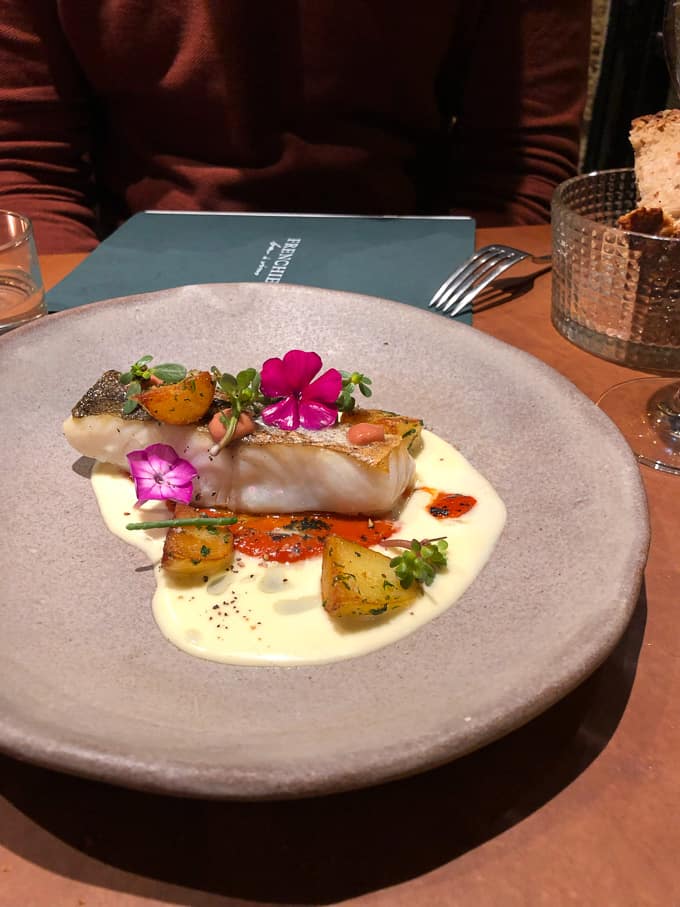 And for dessert, we had a peach tart with lemon sorbet. 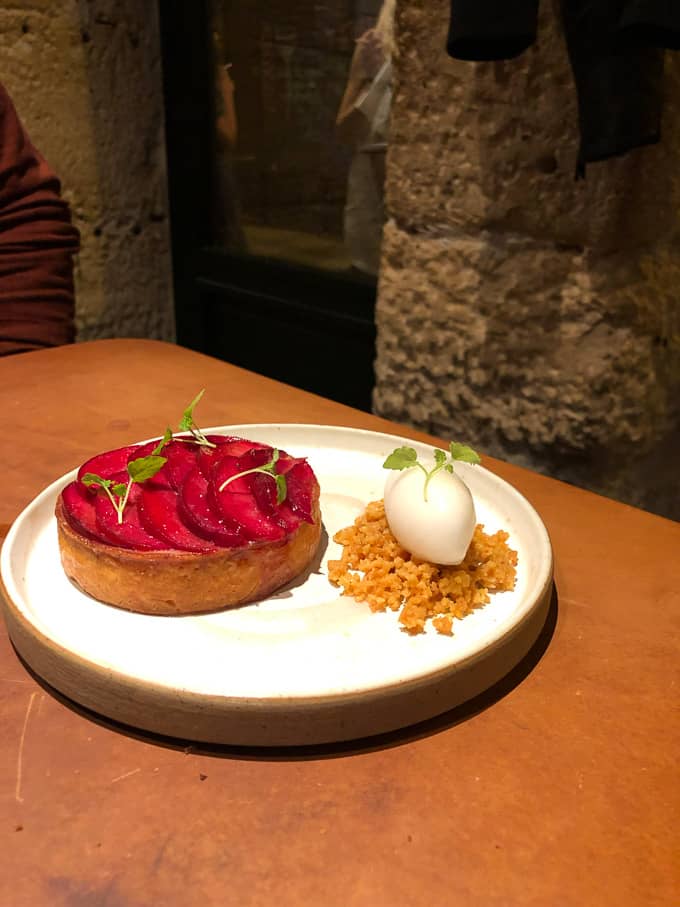 After dinner, we walked through the Paris streets until after midnight, just taking it all in with the little time we had left. We walked by the Sienne, and by Notre Dame (under construction) as well :(.

In the morning we only had an hour before we had to catch the train back to CDG so we stopped at the closest cafe to our hotel, Café Madame. One of the things that really struck me walking around Paris was how no one walks around with a coffee cup in hand. Everyone stops to sit down and savor their cup of espresso or coffee. Everything in Paris feels slower even though it’s a big city. Parisians appreciate the simple pleasures in life. Slowly sipping coffee. Putting away their phones while they sit around a table with friends or their S.O. Lingering over a dinner for 3-4 hours. Savoring a glass of wine. No wonder I feel like I could live in Paris. Also, the croissants. Full stop. 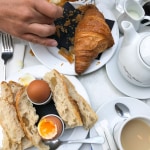 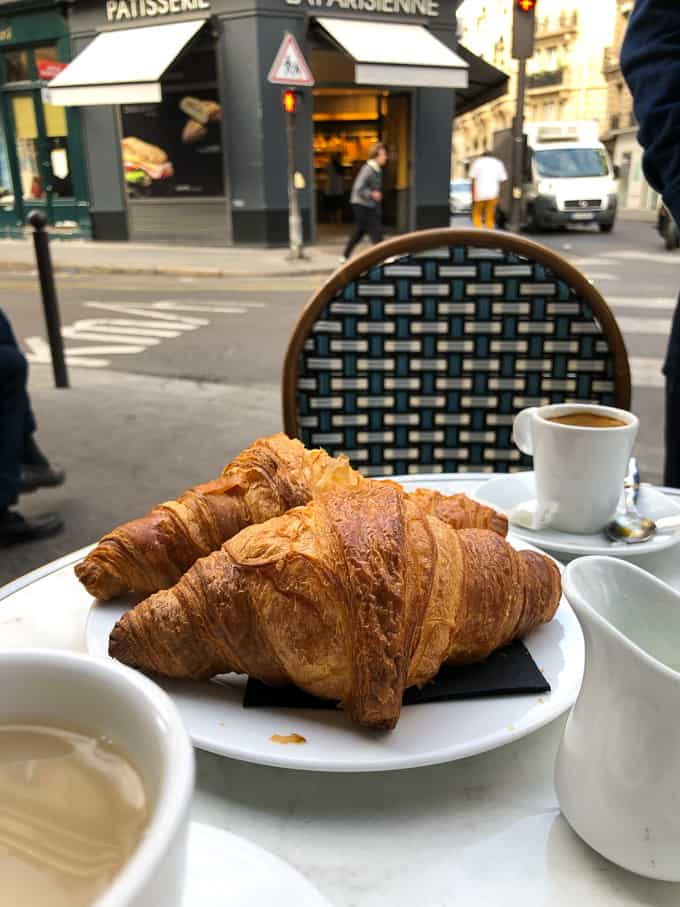 This was the perfect breakfast to cap off our time in France. If only I could get croissants like this back home. I have yet to find them. If you’ve only got one day to explore in Paris, I hope this blog post helps you! And if you’ve got more time, check out some of my other Paris posts below. 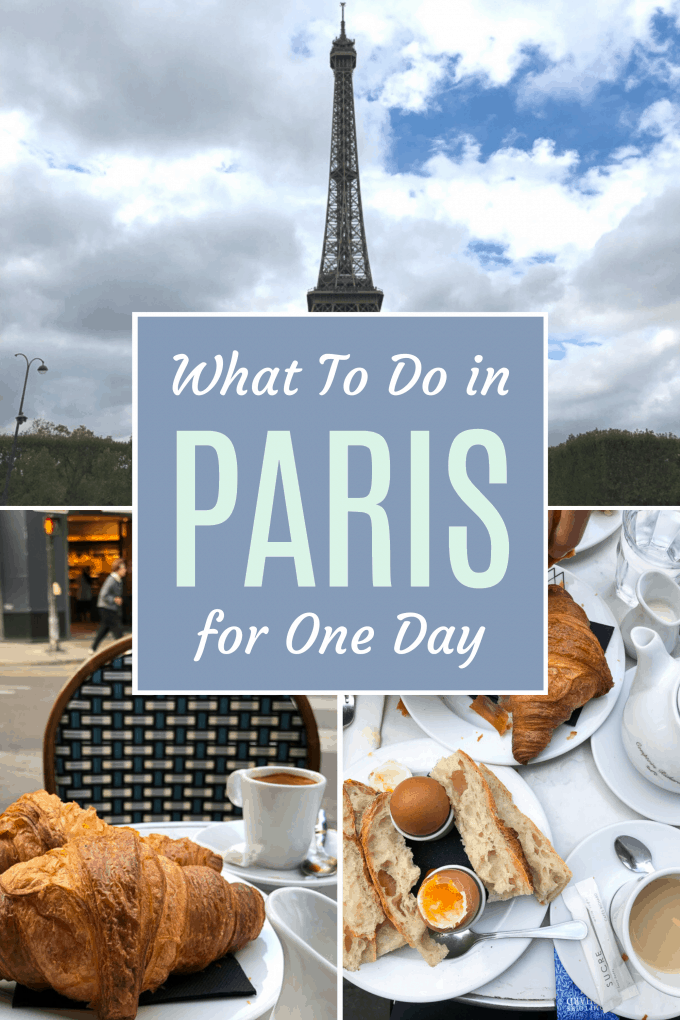 If you love to travel like me, you can check out my other Europe travel guides like Portugal, France, and of course, Italy! 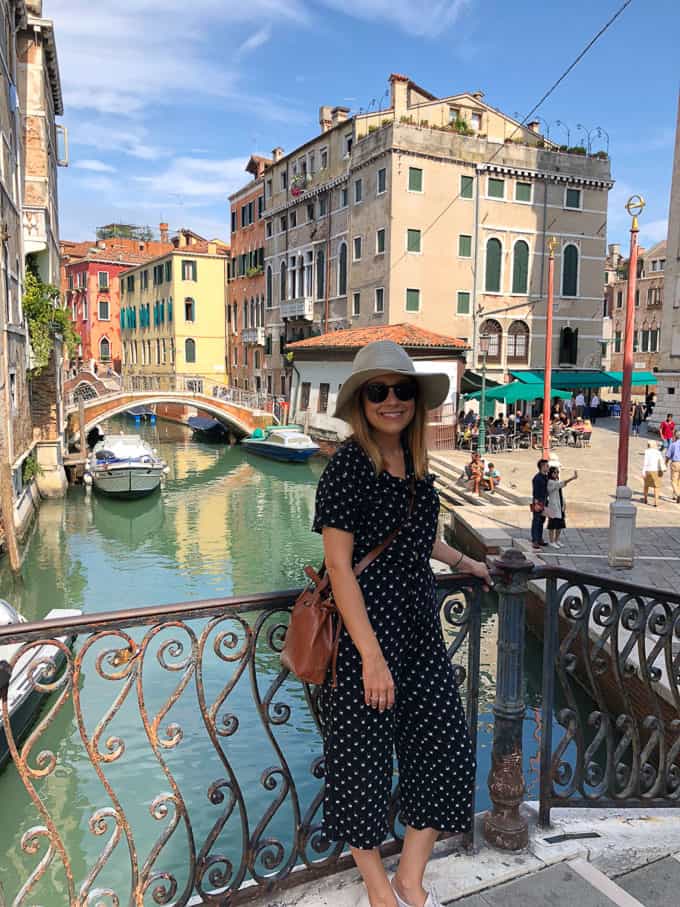 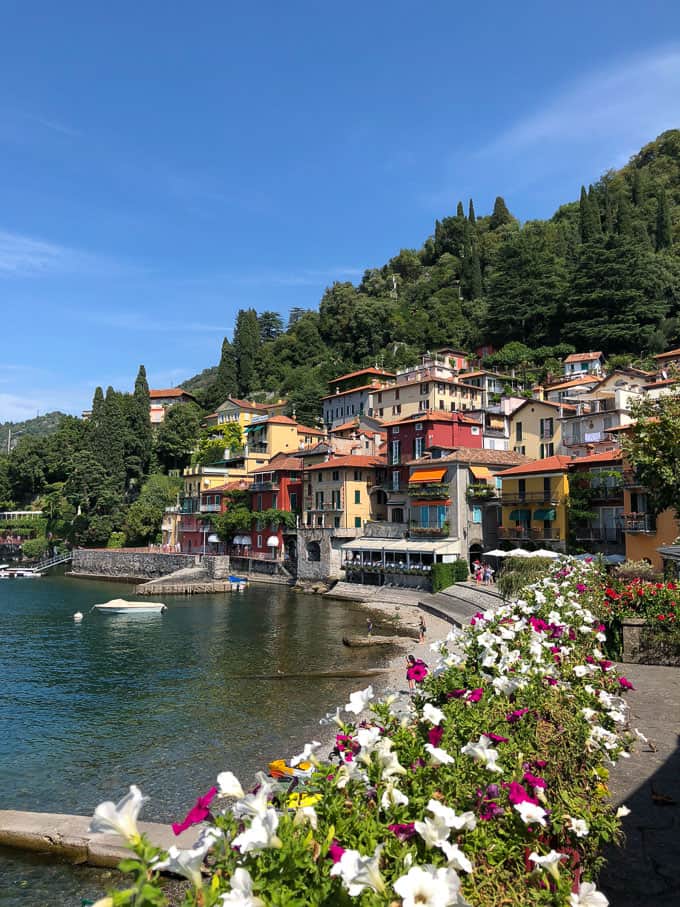 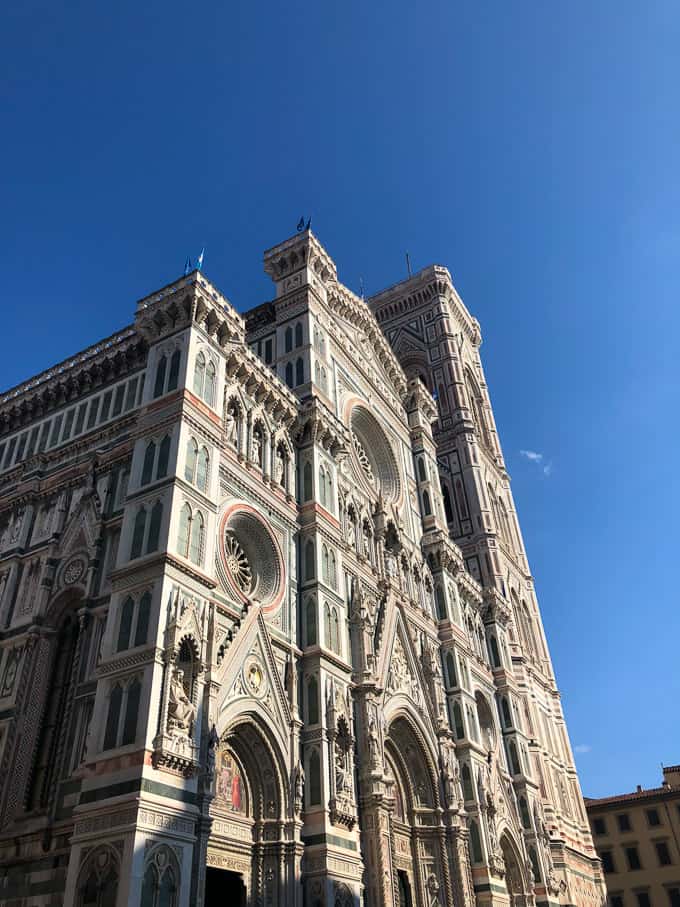