Home » Travels » The 9 Best Sights to See in Paris

As I was writing my “best eats” posts, I realized there is so much more to Paris than eating the delicious food (shocking, I know) and found myself wanting to share more about the sights we saw while we were there. So, voila! I introduce to you the 9 best sights to see in Paris!

The Pompidou was not first on our list of sights to see and in fact, we only ended up there because the Musee d’Orsay was closed. And we barely found it because, well look at it! Who would think this structure houses famous paintings and modern art? Not I. We actually quite embarrassingly asked a local where the Pompidou was and he pointed across the street. We were legit standing right behind it. #awkward

Pompidou is mostly modern art but they do house some art from famous French painters from the 20th century, i.e. Picasso. If you love modern art, definitely check this place out. If you’re more of a fan of the classics, go to the Louvre and d’Orsay first and head to Pompidou if you still have time. 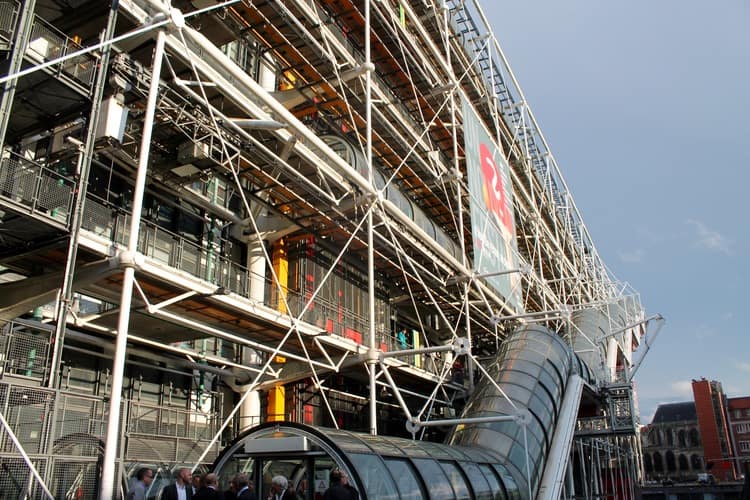 This gorgeous basilica built in 1914 sits on top of a hill in Montmartre, offering spectacular views of the city of Paris. And even better views if you pay the 5 euro to climb your way to the top. Make sure you walk around inside – the interior is breathtaking. We stopped to sit for 5 minutes or so to take in our surroundings and listen to the beautiful mass being sung in French. It was really peaceful. 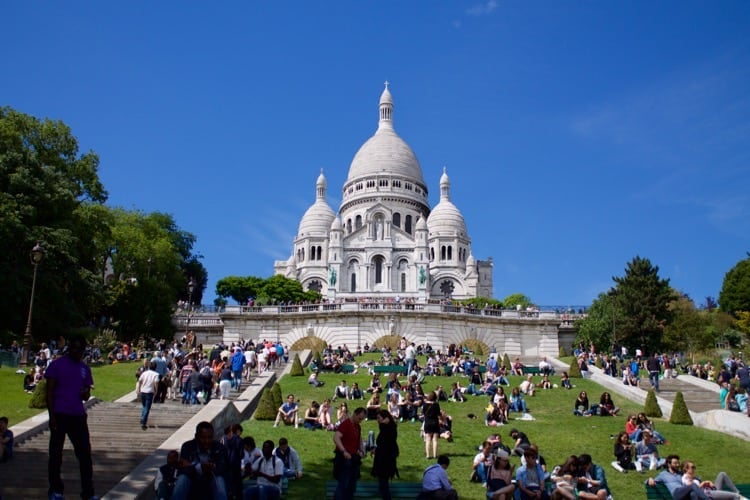 Not so peaceful was the climb to the top. A narrow, winding enclosed staircase of about 300 or so cement steps, you may start to feel a little dizzy or lightheaded once you reach the top. Let’s just say the palms were a little clammy by the time I made my way up there. But had we not climbed we would have missed out on these views. 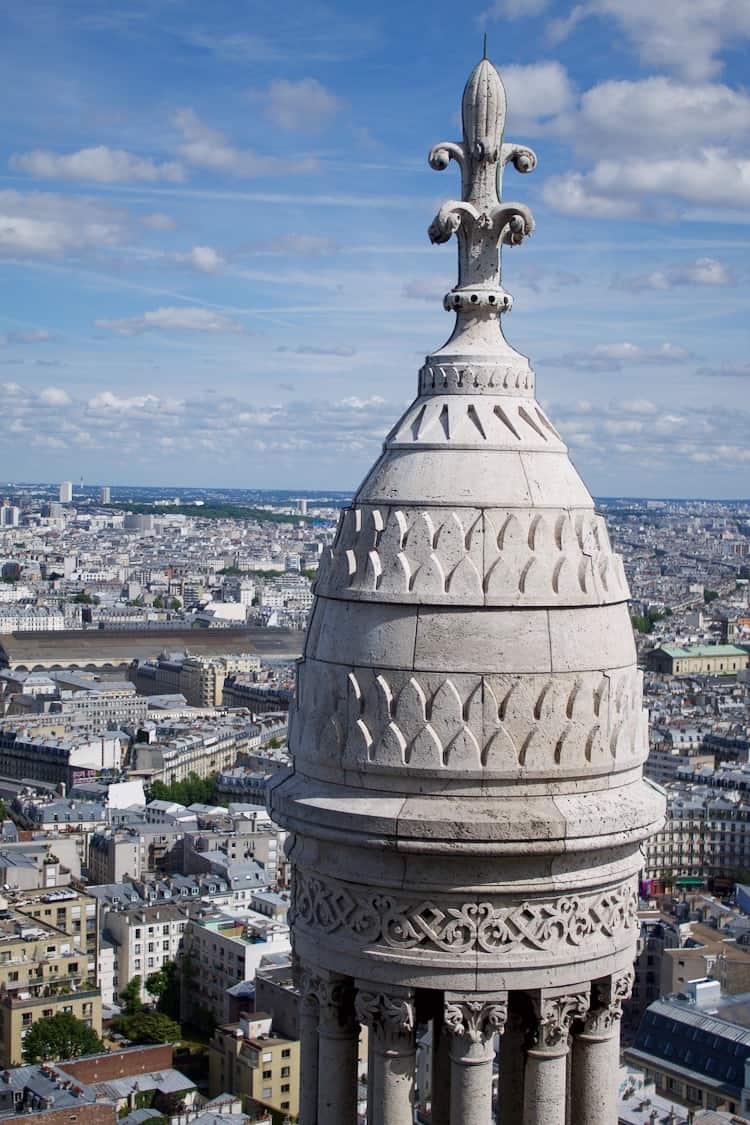 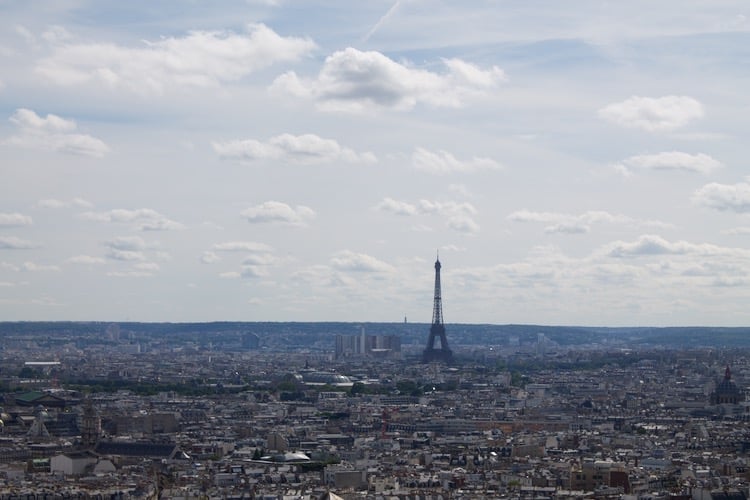 A trend that started in 2008 in this romantic city, couples would declare their love by writing their initials or names on a lock and locking it on a bridge in Paris. The trend spread like crazy and soon multiple bridges contained locks – there were more than one million locks across 11 bridges and even the Eiffel Tower! One bridge in particular started it all and housed about 700,000 locks. The city of Paris decided the locks posed concern of safety to visitors as the bridges wouldn’t be able to withstand such weight. So, of course, a week or two before we got to Paris, they removed the locks from the love lock bridge. I mean, didn’t they know we were coming?? 😉

The good news is they preserved a few spots on the side of the river bank so you can still experience the love. Caaaaan youuuu feeeeel the looooove tonight? Yes. 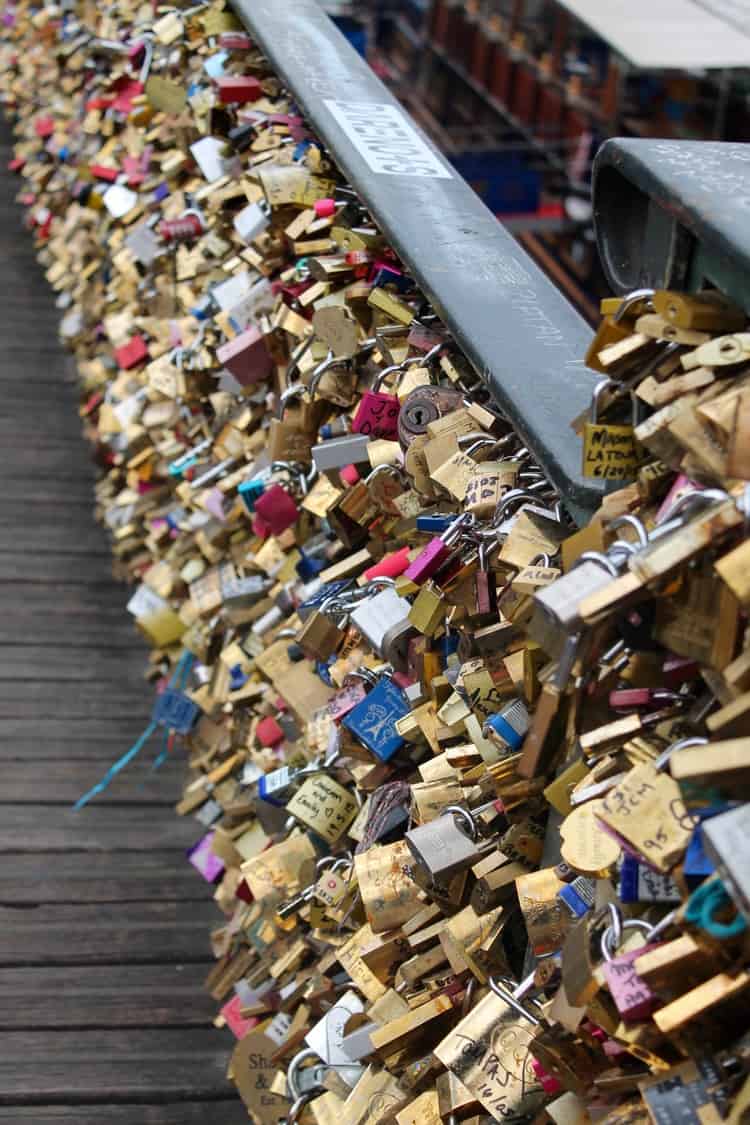 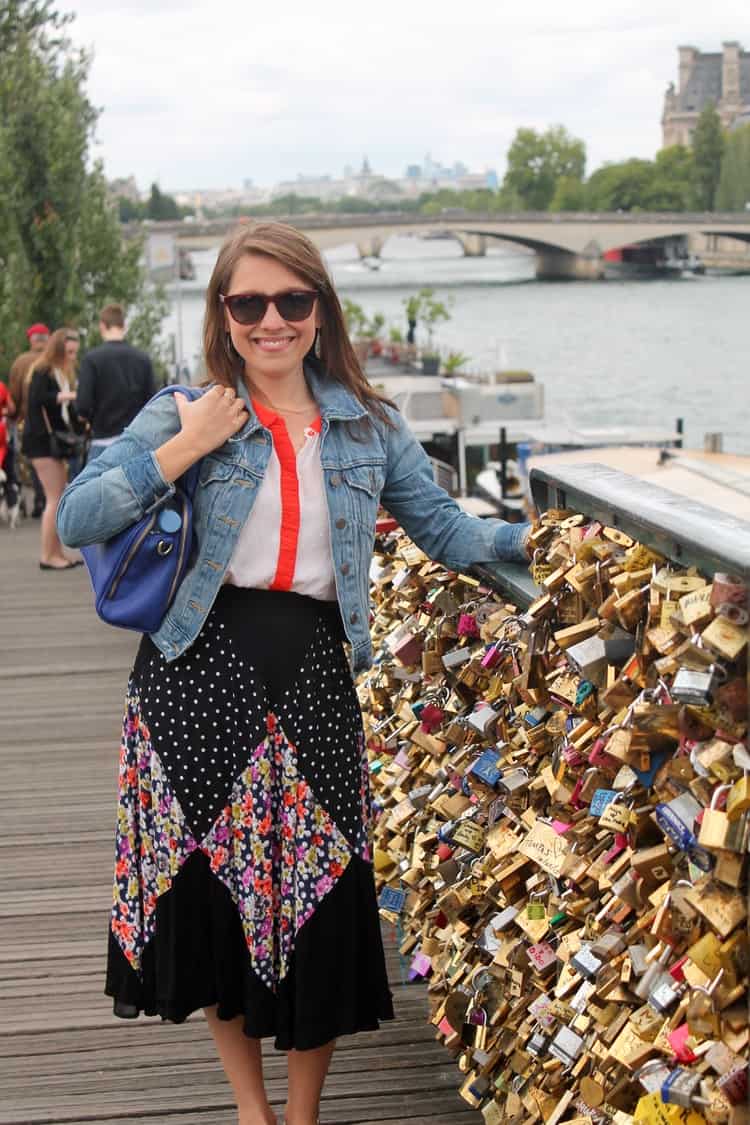 Railroad station turned museum, this must-see museum is housed in a former railroad station built in 1900. If you’re a fan of impressionist paintings, you’ve got to make it here to see the classics by Van Gogh, Monet, Cezzane, Gaugin, Degas, and Renoir. 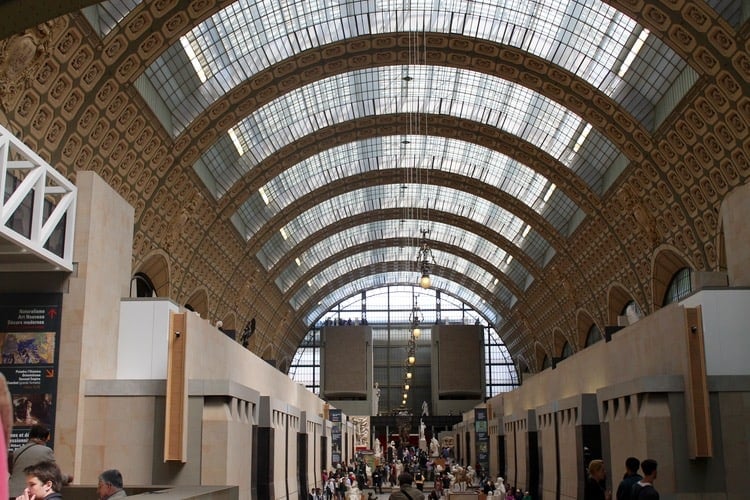 The interior and this clock alone make the trip to d’Orsay worth it. French art is an added bonus (kidding!). 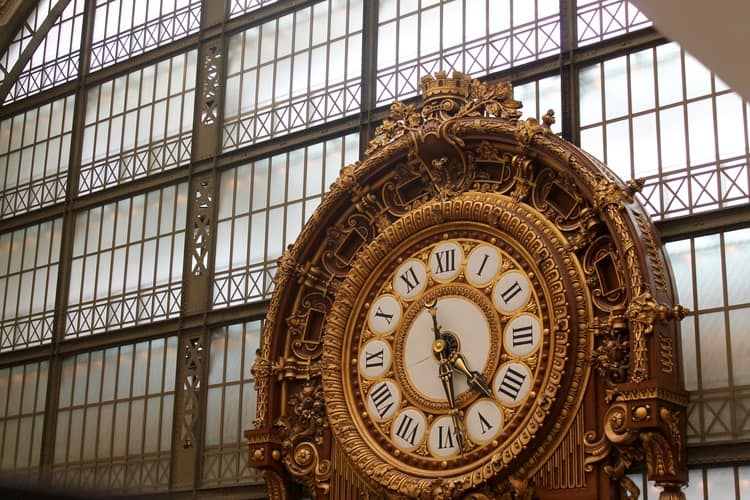 #5: Arc de Triomph de L’Etoile (or Arc of Triumph of the Stars)

The Arc de Triomph is quite the monument. It honors those who fought and died for France in the French Revolutionary and Napoleonic Wars and has all the names of French generals inscribed on its surfaces. It’s a beautiful structure that sits in the middle of a massive rotary with 12 different streets radiating from it. Glad we weren’t driving! 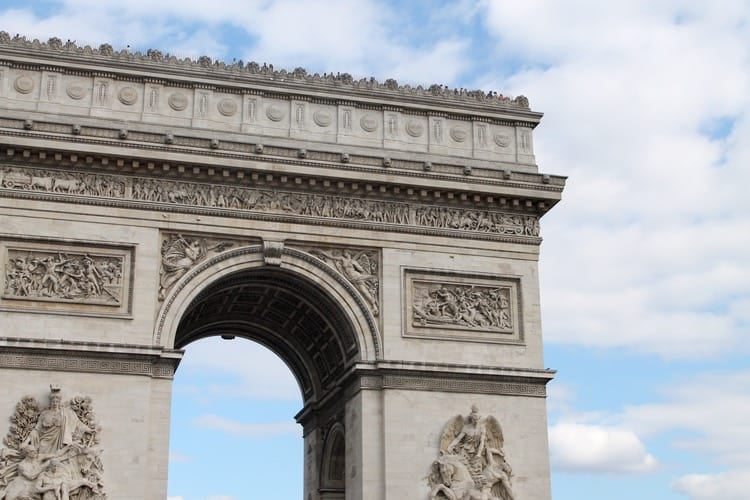 If you make it to the Arc, be sure to take the stairs all the way up for the BEST view of the Eiffel Tower. 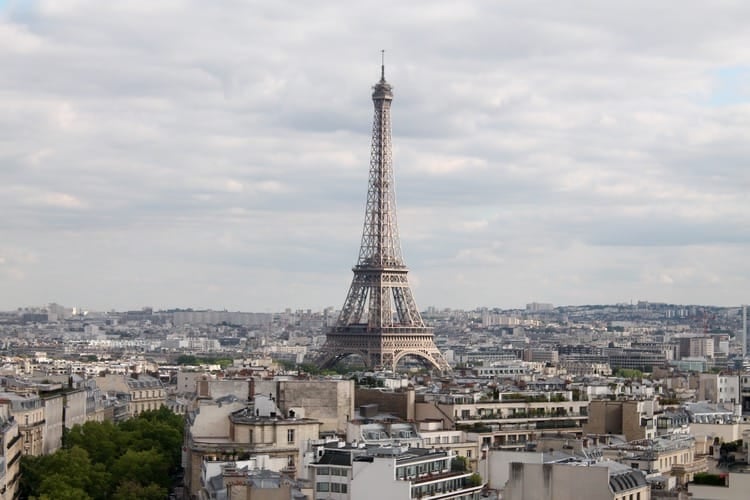 This place is unreal. The french gothic architecture is outstanding and the stained glass windows and interior, breathtaking. I still can’t get over that the construction for this cathedral began in 1163! And took about eight centuries to finish all the restorations! 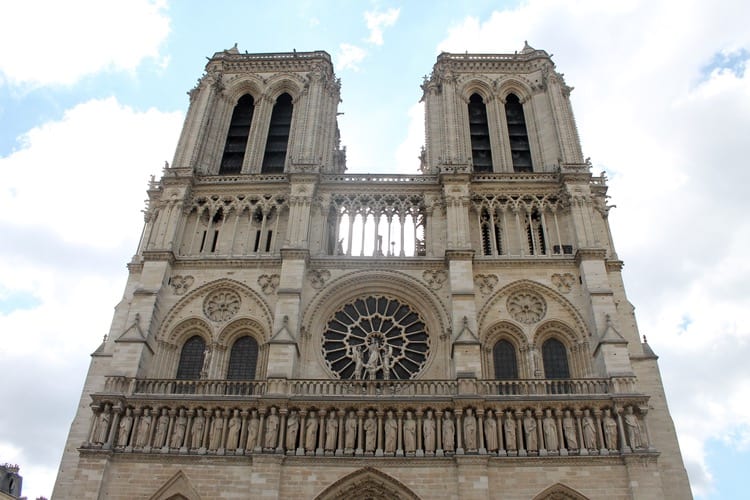 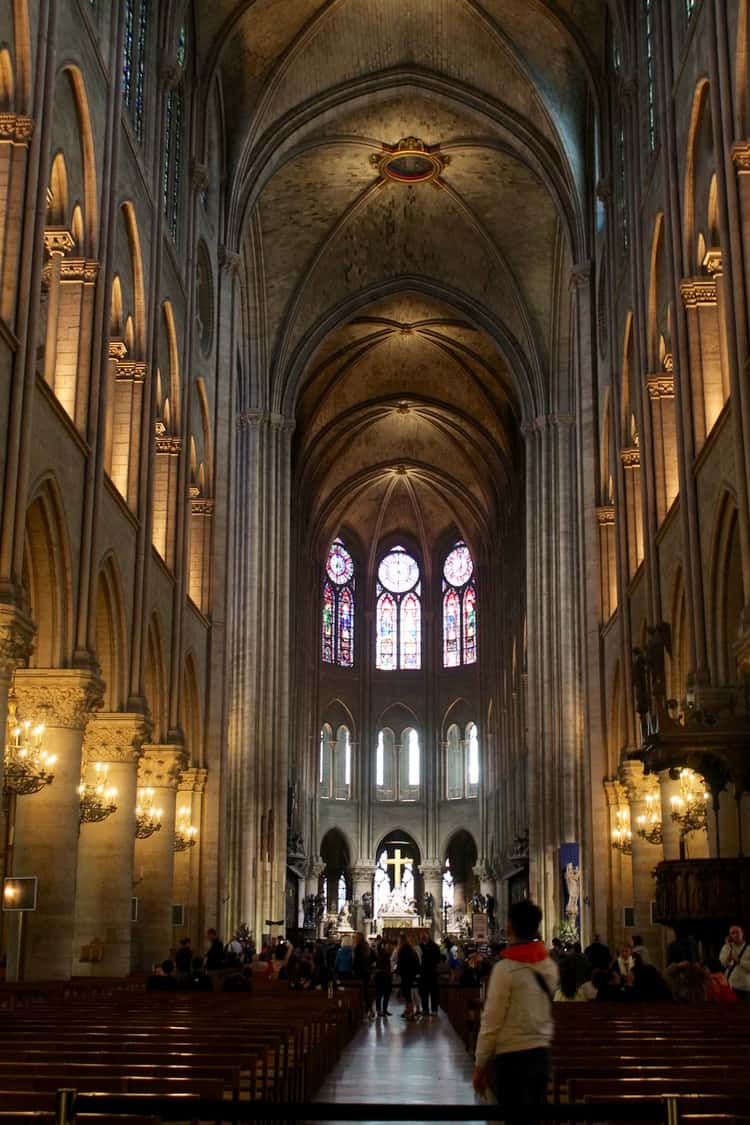 Of course, we walked up to the top of this one too. Beautiful views of the left bank! 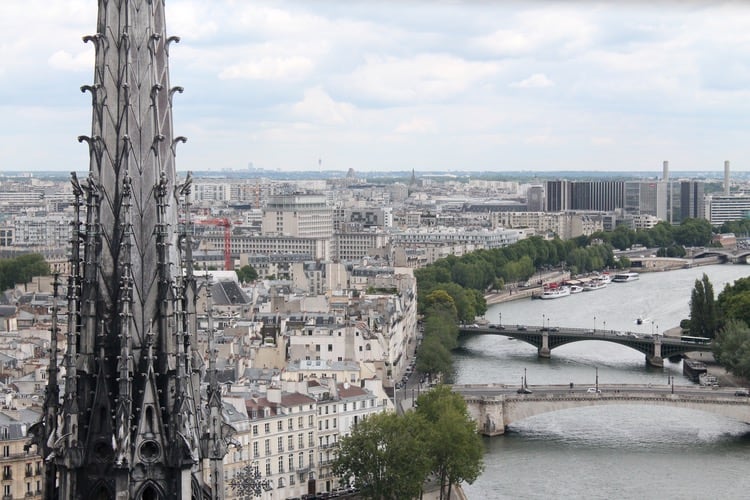 DYK that gargoyles actually serve a functional purpose? They serve as water spouts to help direct water away from the roof. 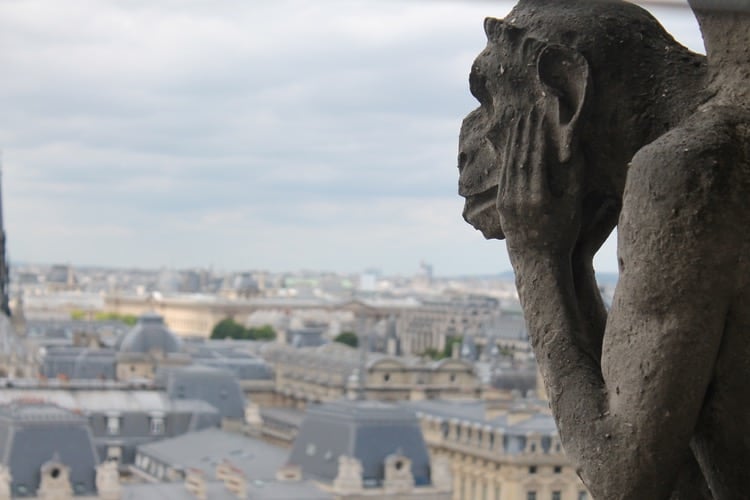 The Louvre Museum is one of the oldest in the world – it opened in 1793. It’s also the most visited museum in the world – it got 9.7 million visitors in 2012! And can we talk about its size?! It’s over 600,000 sq feet and houses almost 35,000 objects from prehistoric times to the 21st century. It would take you days to see everything. Because it’s incredibly massive, I highly suggest downloading Rick Steve’s Audio Guide to help guide you to see the highlights of the museum. Thank god my friend downloaded it (I was like meh, I don’t think we’ll need it, oh but we did). We would’ve been lost in there without it. 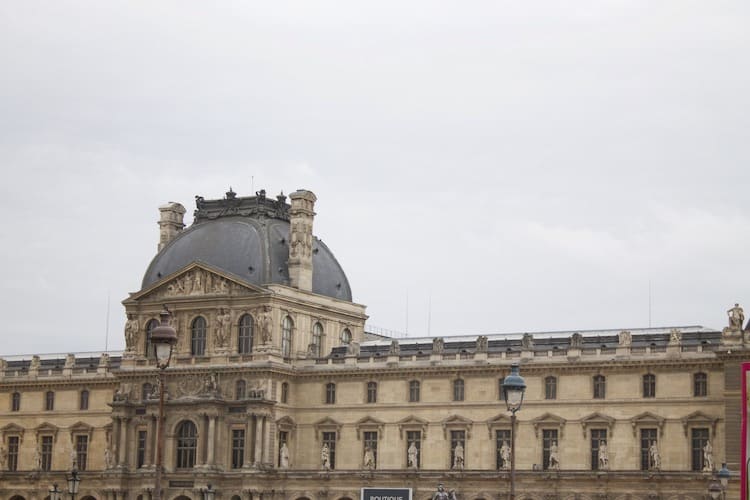 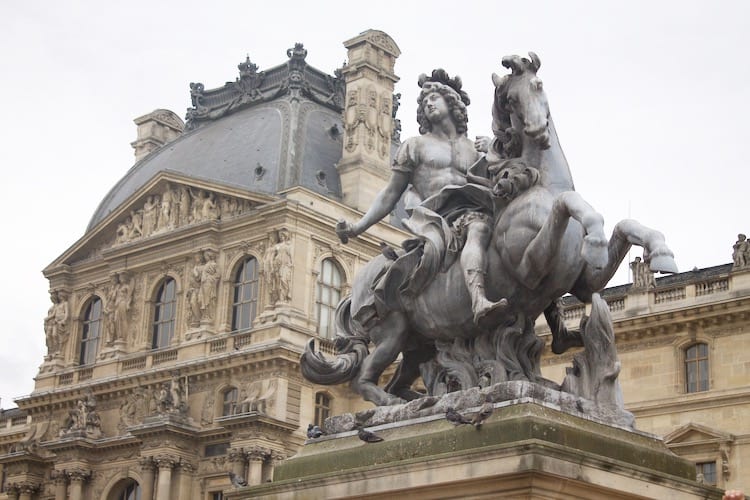 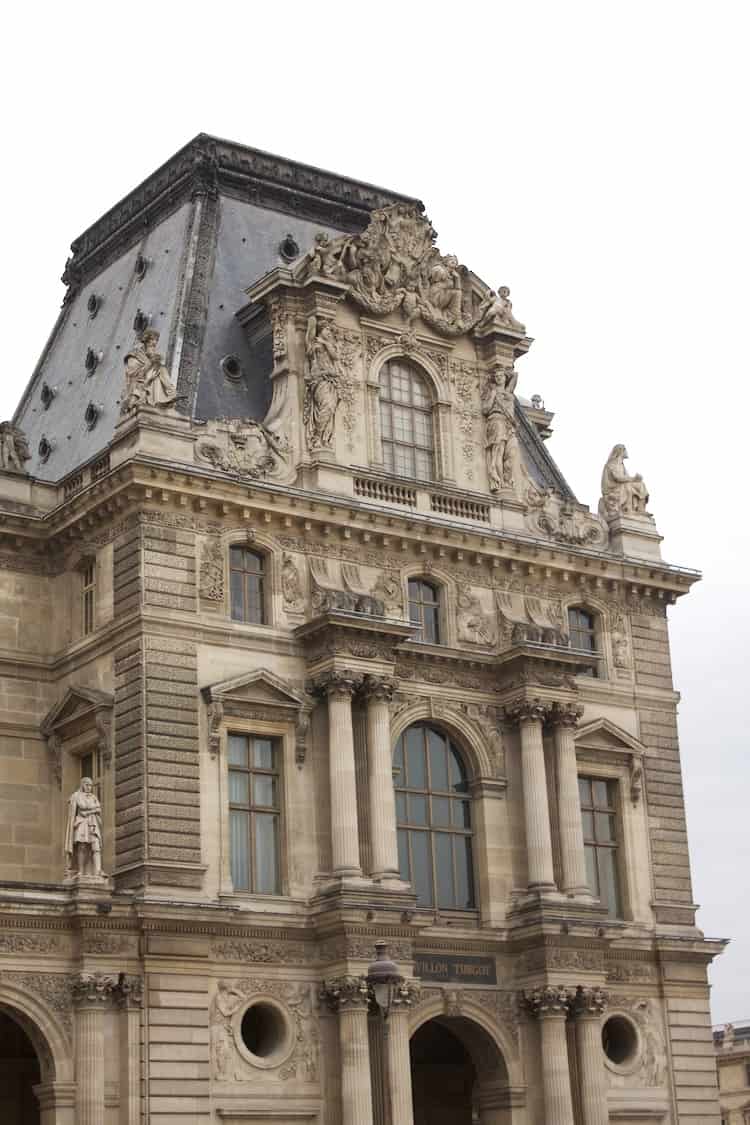 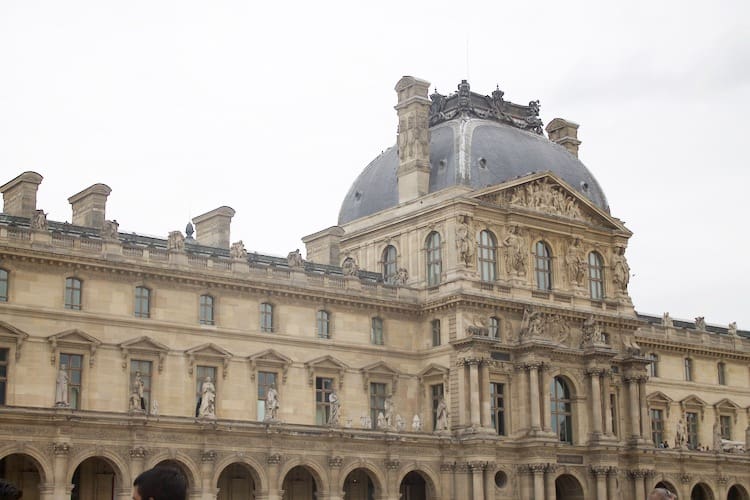 One of my favorite things about the museum was oddly enough…the ceilings. They were absolutely beautiful. 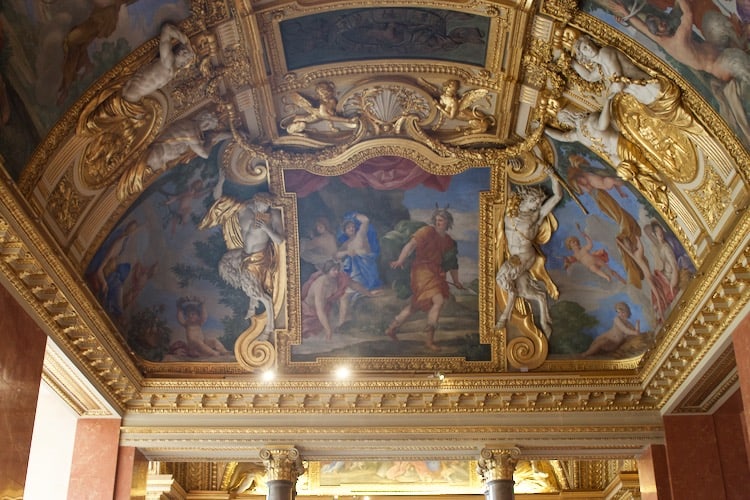 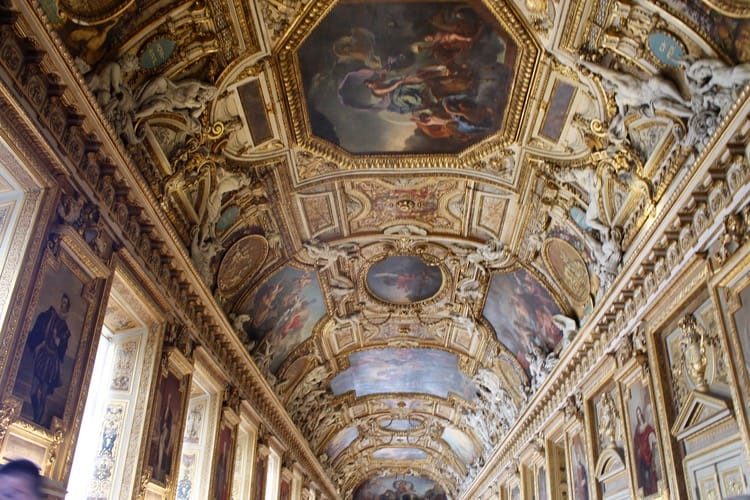 Oh yeah, and then there’s getting trampled by a million people to decide whether or not she’s smiling… 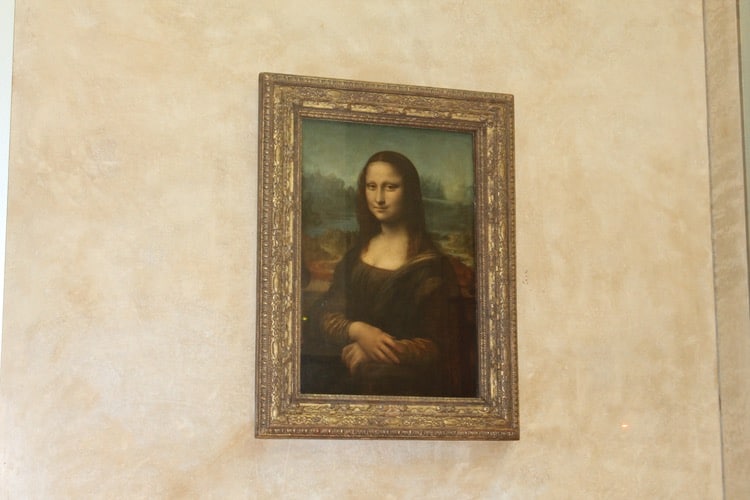 One last takeaway for the Louvre – if you don’t want spend four hours waiting in line to get in, buy a Paris museum pass! You can skip the long line and get right in. Plus, you can use it at the Arc de Triomph, Notre Dame, Musee d’Orsay, Pompidou, and so many others! You can get a one-day, two-day or three-day pass. We opted for the two-day and it worked for us!

The iconic Eiffel Tower. It’s even more charming and amazing in person. Built in 1889 for the world’s fair, this structure was the tallest in the world at that time until the Chrysler building surpassed it in 1930. One word of advice: don’t wait until your last day in Paris to see the Eiffel Tower. That’s what we did, thinking we’d save the best for last. But saving the best for last translated to not saving enough time to go all the way up to the top. We did manage to gaze up at it for some time while eating brie and falafel though. #priorities 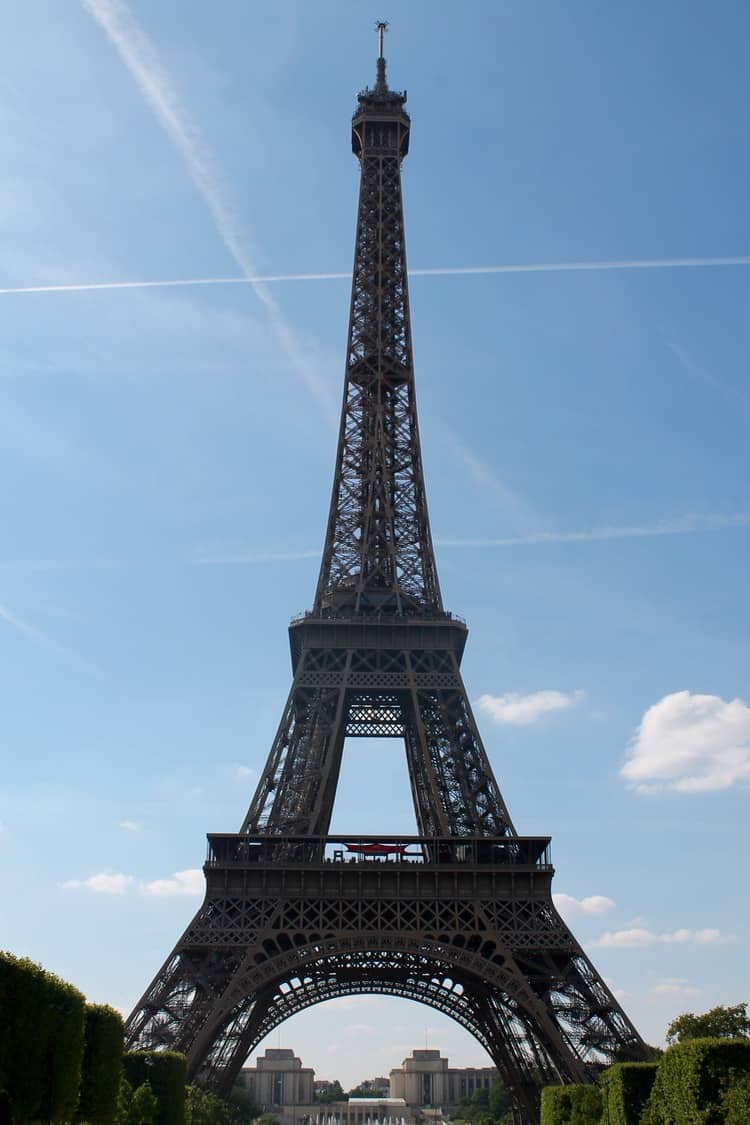 And even though we didn’t get to make it up to the top, we did make it back that night to see it all lit up. It’s definitely worth making the second trip back to see it sparkle (yes, it literally sparkles on the hour). And apparently, the trend is to bring a bottle of wine with you at night and sit in the park to wine and gaze. We missed the memo but all the cool kids seem to be doing it. 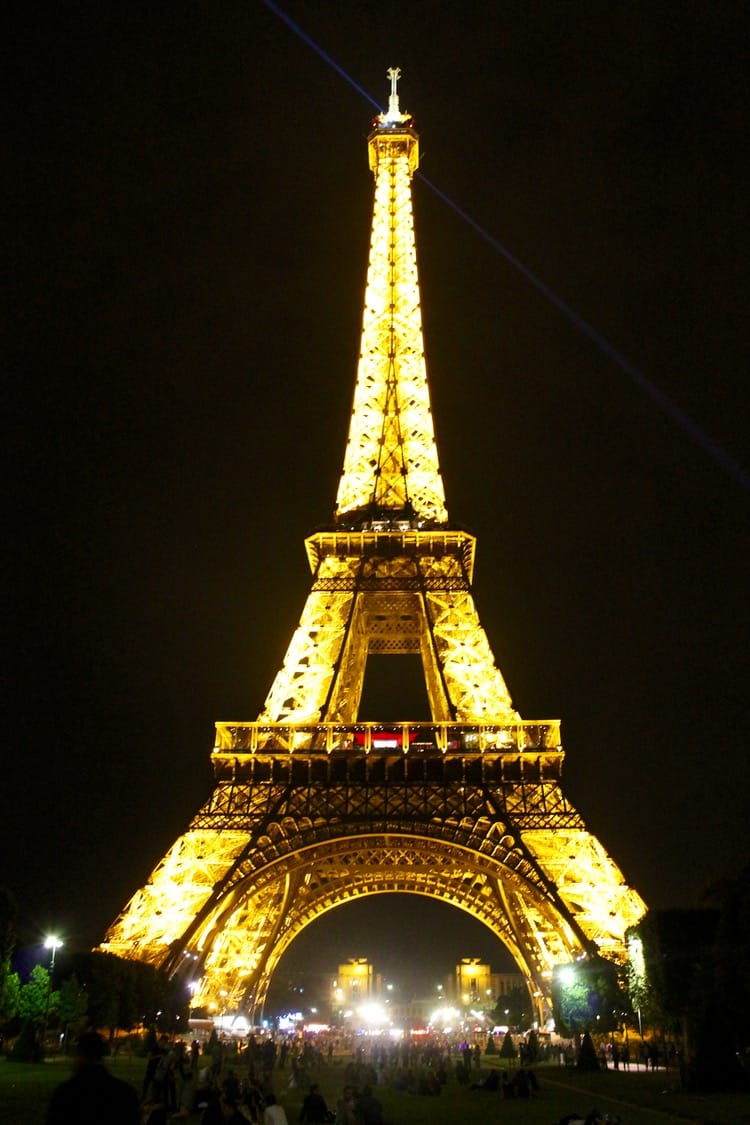 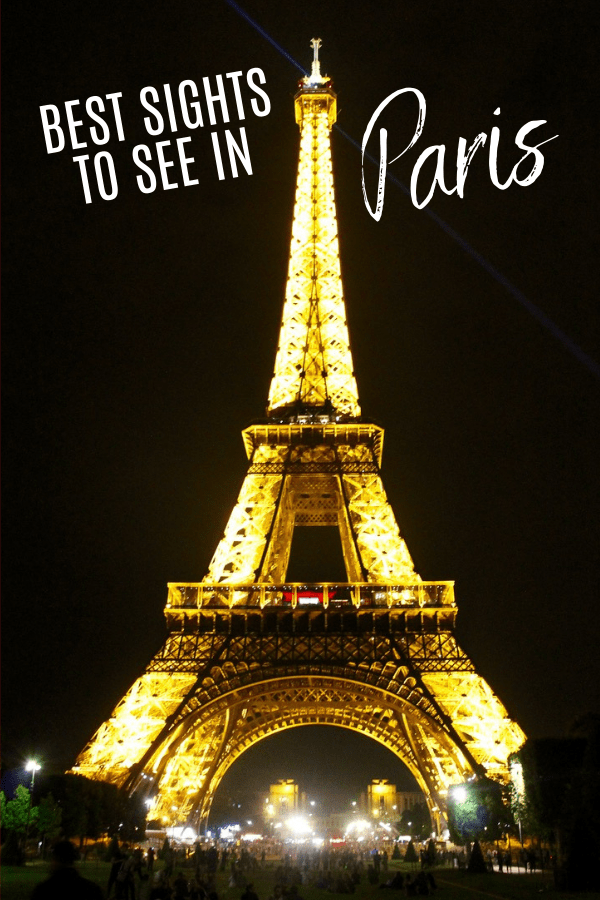 Tell me, what’s your favorite sight in Paris to see? If you’ve never been, what’s the first place you’d want to go to?