Home » Self-Care » Musings on Healing and Recovery (A Concussion Update)

Musings on Healing and Recovery (A Concussion Update)

Sharing my concussion story, what life has been like lately with post-concussive syndrome, and my musings on healing and recovery. 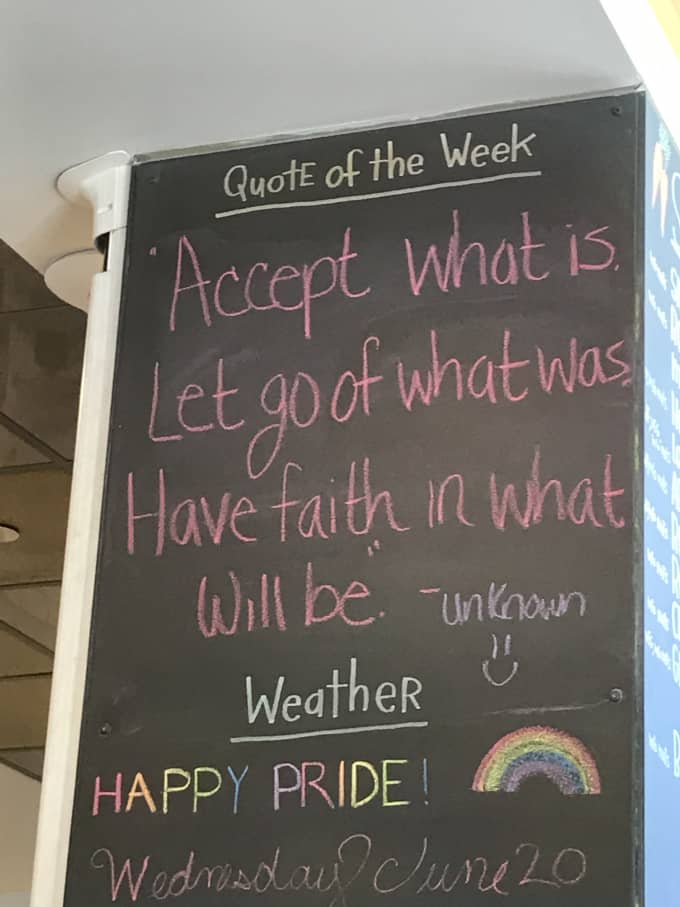 These past six weeks have been excruciatingly hard and in some ways they have also been strangely beautiful.

In case you didn’t know, six weeks ago I was in an accident. Steve and I had just finished a dinner date night out (after not being home together for three weeks, we had lots of catching-up to do). After dinner, we decided to walk across the street to another restaurant where our friend recently started a new job – we thought we’d pop over to say a quick hello while he was working. As we crossed the street, my eyes were set on the restaurant where he works and so my gaze was to the right. Little did I know that to my left, a pick-up truck was making a swift left hand turn onto the street where we were crossing. Steve must have been looking at the restaurant too because neither of us saw it coming. And unfortunately, the driver didn’t see us crossing the street either. Steve was just a few steps ahead of me and all the sudden out of the corner of my eye I see the side of this truck just inches away from Steve and my heart started racing and I started to say, “Oh my — but was interrupted by the loud BOOM that followed and the piercing pain in the side of my head. I’d been hit.

As my body moved in space, I caught myself from falling to the ground. The adrenaline rushing through my body propelled me to start frantically waving my hands in the air at the driver and motioning to her to pull over. Steve, meanwhile, was ushering me out of the street and onto the much safer sidewalk. Steve started asking me if I knew where I was and what happened and made me follow his fingers with my eyes. I felt fine. Just in shock. And I couldn’t deter my focus from the vehicle that hit me. She ended up pulling over but she was at least two blocks away from us. By the time I said to Steve you should run over to her and get her information, she pulled away. We never got her plates or anything.

We basically handled the situation all wrong. I can’t say I ever took the “what to do when you get hit by a car crossing a street” class so I was ill-prepared. We both were. It also didn’t help that we were both in states of shock. That kind of clouds any common-sense you might normally have. We went home. It was late. I cried. I laughed hysterically. I felt a little manic. But I was exhausted and went to bed. I slept for almost 12 hours. I woke up and felt extremely depressed. It was Memorial Day Weekend and Steve and I made a bunch of plans since we hadn’t had a weekend at home together in weeks. I didn’t feel like doing anything. None of our plans felt appealing to me. I felt a little numb but the tears also kept falling.

Steve went out to go get bagels for us (as if there was some chance that bagels could cure trauma). They were delicious but I (not surprisingly) still felt depressed afterwards. While he was gone (now this is kind of embarrassing) I literally googled “what to do when you get hit as a pedestrian.” Again because no class on this stuff, and also apparently loss of common sense. It walked through like seven steps or something and we completed one of the seven. Steve ushered me out of the street and onto the sidewalk. We however failed to do everything else: get the driver’s information, call the police, seek medical attention. Whoops. When Steve came back home, I told him I think we should go to the police station to file a report and he said he was thinking the same thing driving home. So we went to the police station and filed a report and they recommended I go to the ER to get evaluated.

Next stop was the ER and they did a complete neuro eval on me but said I seemed fine and they didn’t think it was necessary to do any scanning. The Attending told me that she thought I probably had a mild concussion but that most symptoms only last a few days and I should be good to go back to work next week. What I wish she had said is what every subsequent doctor told me which is that concussions are extremely unpredictable and we can’t predict how long your symptoms will last but you should plan on taking this next week off and to just focus on recovering.

Because what do you think I did? I went right back to work the following week. The doctor told me it was fine and that was all I needed to hear! I went to a sweaty yoga class the following Wednesday and the music felt so loud and so triggering I wanted to scream. I should have just rolled up my mat and left but I didn’t. Afterwards, I had the worst headache and went into brain fog mode. I didn’t feel like myself again. I saw a few clients and decided to take the rest of the week off. The next week looked similar. After resting for four days, I started to feel better and thought I could go back to work on Monday. I did. And I regretted it immediately. Headaches. Eye pain. Brain fog.

And so I took the rest of the week off again. And for the past few weeks have just been trying to work on a modified part-time-ish schedule, taking frequent breaks. I’ve never had a concussion before so this was all new to me. But my symptoms have been sensitivity to light and sound, headaches, eye fatigue/strain, brain fog (or cognitive fatigue), and screen time is a big trigger for my headaches/eye strain.

Here’s what I’ve learned about concussions:

At the beginning of this post I said in some ways these past six weeks have also been strangely beautiful. The reason I said that is because by slowing down, I’ve opened up so much more space for other things besides work. Here are a few of my regular activities as of late: 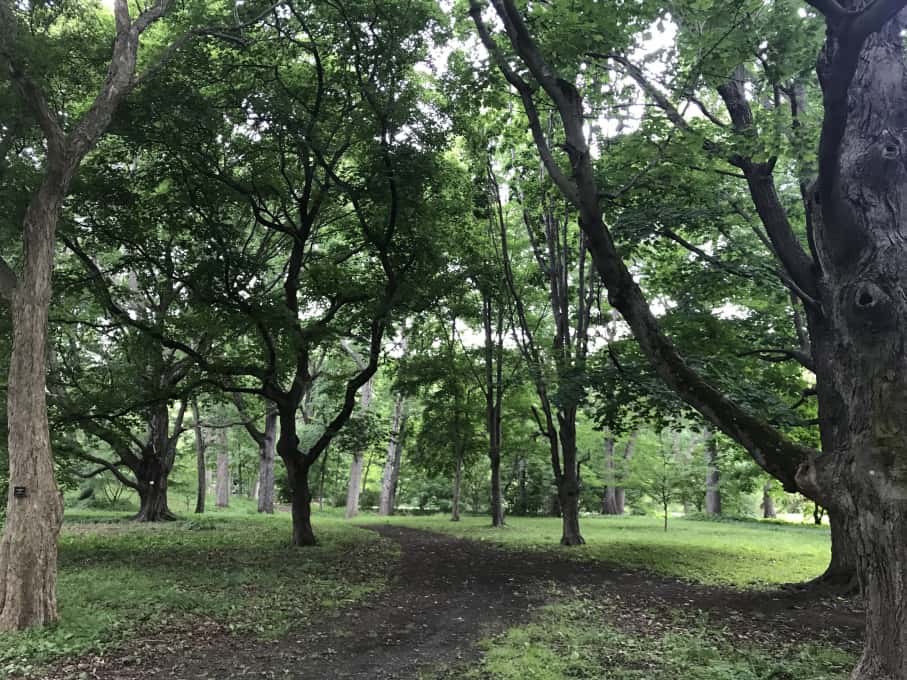 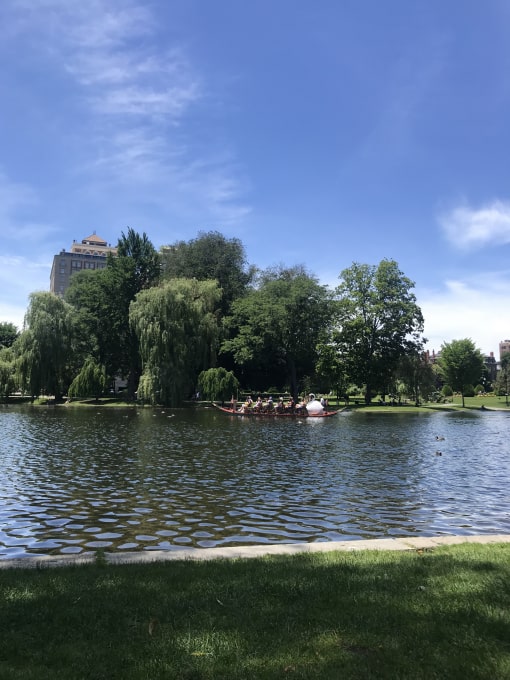 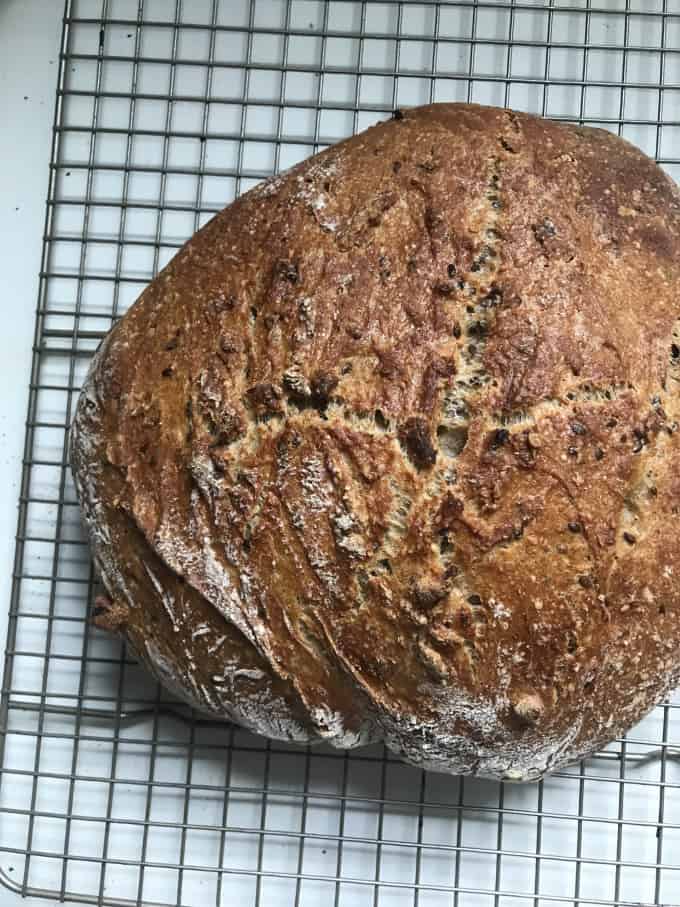 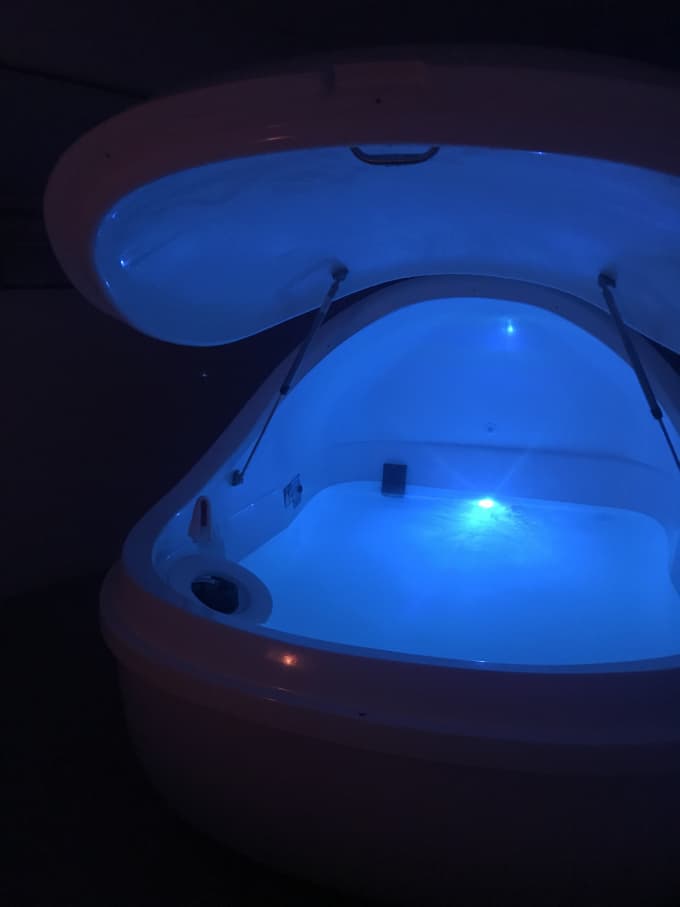 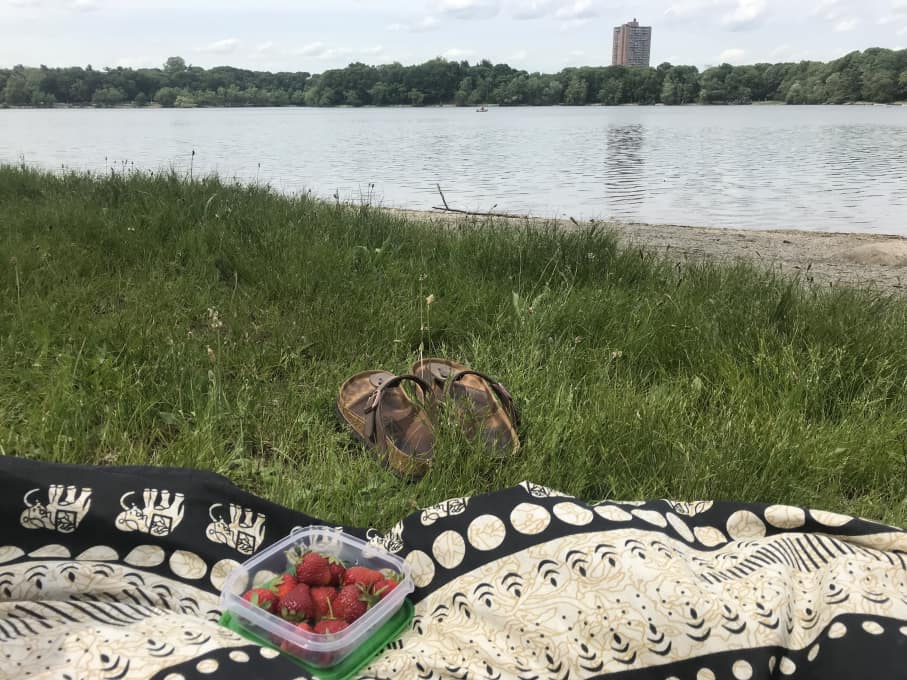 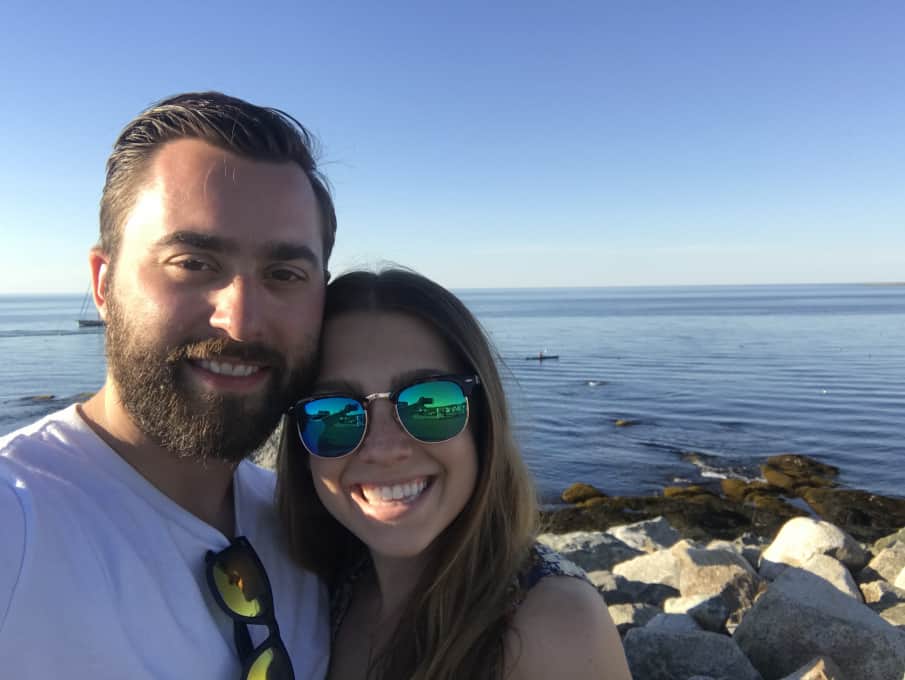 The Struggles of Healing and Recovery

Healing from this concussion has been so mentally and emotionally and physically challenging for me. The hardest part for me to cope with has been the unknown. Not knowing when I’ll start to feel like myself again and the biggest fear of all, what if I never feel like myself again (which is a reality with post-concussive syndrome although pretty rare). What if my symptoms never fully disappear. What if this is my “new normal” – a phrase I came across in some articles people wrote on recovering from a concussion. Side note, I also quickly learned not to read anything about the internet on concussions because it always ended in tears. The not knowing piece is so hard.

Going through my own healing journey, I began to draw parallels to the work I do with clients who are also in their own recovery process. Some of my clients are recovering from and eating disorder and some of my clients are recovering from diet culture. I’ve heard the fear from my clients before – what if I never recover? What if intuitive eating doesn’t work for me? Although I understand that recovering from an injury and an eating disorder are two totally different things, I think there are similarities in any sort of healing or recovery process. And the bottom line is healing and recovery are not linear. It is not a straight line. There is often no roadmap to lead you there. You have to navigate the murky waters. You must learn to sit with the discomfort. You have to try to cultivate patience and faith. You surround yourself with people who understand and who’ve been through it. You search for hope. And you’ll have setbacks. You’ll have days where you just want to throw in the towel and quit. But you pick yourself back up and muster the strength that is inherently in each one of us and you keep pushing through. You recognize the small wins. The minor improvements. Because they provide a glimmer of hope. They show you progress is being made, despite the setbacks. The momentum is upward. 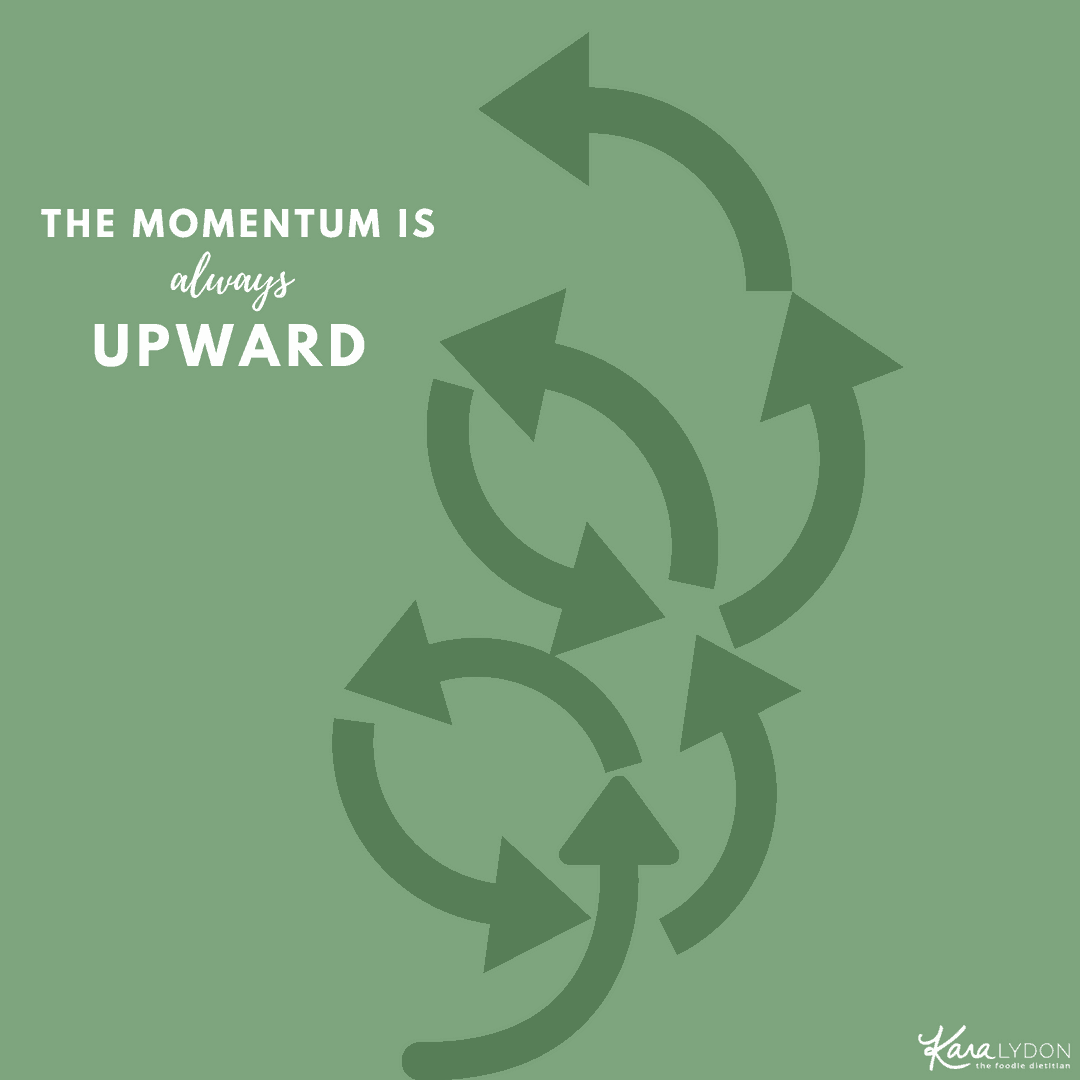 Healing is hard. Recovery is hard. But it’s worth it. YOU are worth it.

Despite feeling pretty hopeless at times throughout my recovery, I’m finally starting to feel like I’m getting better and making improvements. I’m not back to 100% yet but I’m hopeful it’s coming soon. I’m supposed to follow-up with a neurologist at the 6 week mark if I’m still having symptoms so that’s likely my next step. This weekend, I’m going to Buffalo to visit family. Steve’s grandfather is in the hospital and not doing so well so we’re going back to visit him. Please keep him and his family in your prayers.

And I also just want to thank you all for your well wishes and love and support over these past several weeks. It’s hasn’t been an easy road but it warms my heart to know that so many people are thinking of me and sending me healing vibes.

And if you made it to the end of this post, phew, good for you! ;). Thank you for listening. This post has felt like it’s been brewing in my head for the past few weeks and it feels pretty cathartic to get it down on…I was going to say paper but you know that I mean. I hope that this post helps someone who is in their own process of healing, whatever that may look like, to know you are not alone. <3

Would love to hear your thoughts in the comments below. xoxo