What Does Unconditional Permission to Eat Really Mean?

Setting the record straight on a well-known concept from Intuitive Eating: unconditional permission to eat. Debunking some myths surrounding this concept and doing a deep dive into what this looks like IRL! 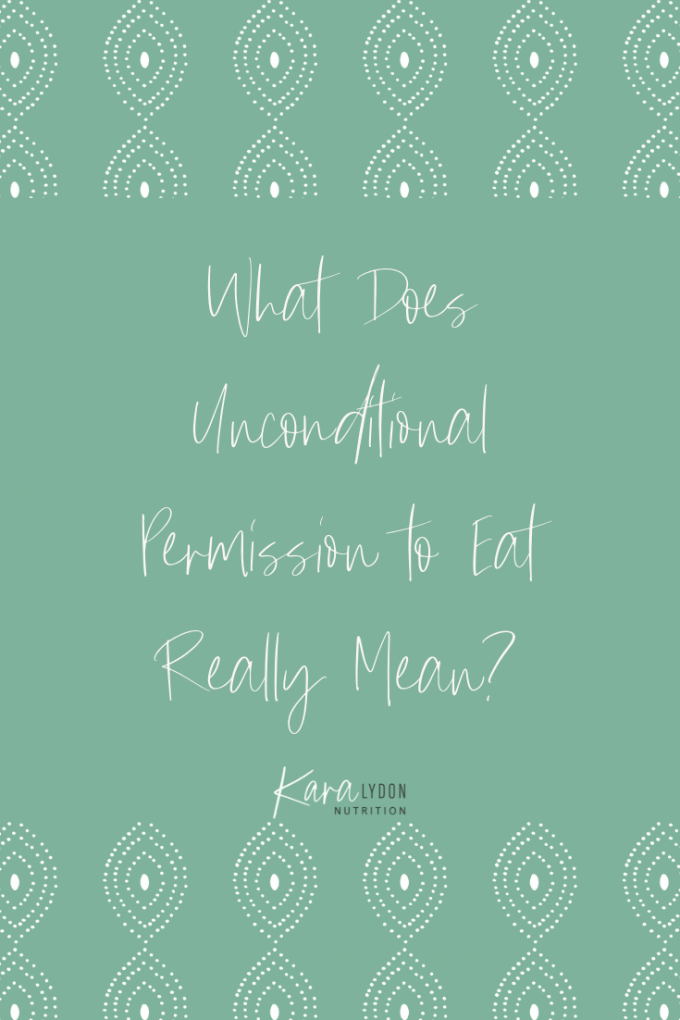 Hey friends! My amazing intern, Mikaela, is dropping by the blog today to bid us farewell by dropping mad knowledge on a topic that’s really important to set straight, unconditional permission to eat. Mikaela just graduated from her dietetic internship and is about to take the nutrition world by storm! She’s an advocate for HAES, weight-inclusive care and a non-diet approach. I’ve had the pleasure of working with Mikaela behind the scenes here for the past six months and am sad to see her go but excited to see where her career takes her! Be sure to follow her along on Instagram so you can see what she’s up to next! Alright, take it away, Mikaela!

Along with spreading the word on Intuitive Eating through social media and posting the everyday wins in real life, setting the record straight on misunderstood concepts is important too. Not only to uphold the true and real theories of Intuitive Eating that are often essential for healing our relationship with food, but also for those times you see a fitspo on Instagram co-opting IE for weight loss (that’s a NO from me).

This isn’t the hunger and fullness diet.

It is also not a-eat-whatever-the-heck-you-want diet.

It has nothing to do with weight loss.

It’s not another diet. Period. The End.

Intuitive Eating is much more than just one principle and I would encourage anyone to read the book in order to fully understand the nuance and complexity of this paradigm, before jumping to conclusions or falling for misrepresentation of what it truly means to be an intuitive eater.

As Kara has set the record straight in her previous post talking about Gentle Nutrition in Intuitive Eating, there is also scientific evidence to support this paradigm. Research has shown us that Intuitive Eating is associated with decreased disordered eating behaviors, improved self-esteem, body satisfaction, depression, anxiety, and general well-being, as well as improved biomarkers like cholesterol and blood pressure.

A common misconception about Intuitive Eating is often centered around the notion of unconditional permission to eat (UPE). When people hear this is an important concept in IE, they often question it. People assume that unconditional permission means eating pizza all day every day or never being able to stop consuming chocolate. This may be the outside view from those who haven’t read the book or done the work to understand the complexity and nuances of Intuitive Eating, but it’s far from the truth. Today, I want to bust down some myths about this concept and clear up some common misconceptions.

Diets tell us what to eat, what not to eat, they dichotomize food, it’s gotta be either good or bad, clean or dirty. With unconditional permission to eat there is no good or bad, there is just food. SPOILER ALERT: you are NOT a good or bad person based on the foods you chose to eat or not to eat. Different foods serve us different purpose, but to constantly put a certain food up onto a pedestal is doing a disservice to the nourishment, pleasure, satisfaction and joy we can derive from all foods. Food is food and once we realize this, the idea that allowing ourselves food freedom seems realistic and necessary in order to heal that relationship.

You’d be hard pressed to find someone who hasn’t at one point forbid themselves of eating chocolate cake and then felt an intense pull to its chocolatey goodness the next time they’re at a birthday party. As Tribole and Resch explain in The Intuitive Eating Workbook (2017), this is the psychological effect of deprivation. Depriving ourselves of food fuels the fire of obsessive thinking about food, and ultimately (through no fault of our own) this leads to overeating and not being connected to one’s body.

When we tell ourselves we can’t have a certain food, we essentially build up a craving for that food. The forbidden nature of that food increases and we feel even more enticed to eat that food when we finally “give in.” This often leads to uncontrollable cravings and bingeing on that food, not paying attention to our hunger or fullness, but solely focusing on eating as much of that food as possible because we’ve told ourselves we won’t have it again. This is what we call the last supper mentality and is where we begin our discussion on what unconditional permission to eat looks like.

WHAT IS UNCONDITIONAL PERMISSION TO EAT?

So what does unconditional permission look like? If you’re familiar with IE, then you know there are 10 principles. Within the principles are various concepts and real life examples. The unconditional permission concept lies in Principle #3, Make Peace with Food. For a lot of people beginning to practice IE, this can be something that there is a lot of time spent on. For everyone it’s different, no one will experience the same journey with Intuitive Eating, but often times this idea of allowing ourselves to eat can be fearful. Why? Because we’ve been stuck in the confines of diet culture and diet mentality.

In the beginning, unconditional permission to eat may look like eating more foods we’ve claimed as off limits for so long. These often include chips, chocolate, cake, donuts, bagels, basically any food that diet culture demonizes and tells us we need to eat less of. Now you’re right if you’re thinking that a lot of those foods aren’t as nutritionally dense as others. BUT when allowing ourselves unconditional permission to eat, we also think about nourishment AND satisfaction.

Even by simply telling yourself you can eat the foods that you want (aka any food, nothing is off limits) the intensity to eat those food diminishes. Crazy right? To start this UPE process, it’s not only telling yourself this (although this might be the first step), it’s then putting it into practice. It comes down to ALLOWING yourself these foods and experiencing the foods that you have restricted in the past. This way, the foods will become less novel since we genuinely know that we can go back to the food when we want.

At first, there can be a lot of fear surrounding unconditional permission to eat. There are a few worries that Tribole and Resch  describe in Intuitive Eating 3rd edition (2012). These include the fear that you won’t stop eating or that you won’t eat healthfully. Let’s address the first fear… you know… the one where you’ve convinced yourself that if you give yourself permission to eat pizza you will binge on that food forever. Well, here’s where something called habituation comes into play.

There is something known as the habituation response. It explains that we adapt quickly to a repeated experience and with each repeated exposure, we derive less pleasure from it. For example, if you make chili on Sunday and say you’ll eat it the rest of the week for dinner… it probably tastes really good on Monday, and with each passing day, the pleasure surrounding that food subsides. When we’re dieting, we aren’t practicing habituation. We’re “being good” during the week and then only exposing ourselves to food when were “off the wagon” or having a “cheat day.” This is restriction in and of itself, and also never allows us to get to the point where we have repeated exposure often enough that the food doesn’t seem so enticing anymore.

There’s no telling how long someone will stay in the honeymoon phase for. It looks different for everyone. But this is how we get to a point where no food has built up that intense craving life aka when we’ve reached habituation. You know you’ve entered habituation when you look at a previously forbidden food and think to yourself, I don’t actually feel like eating this today, I can come back to it later if I so choose, but whatever I do choose is not wrong or right, it just is. 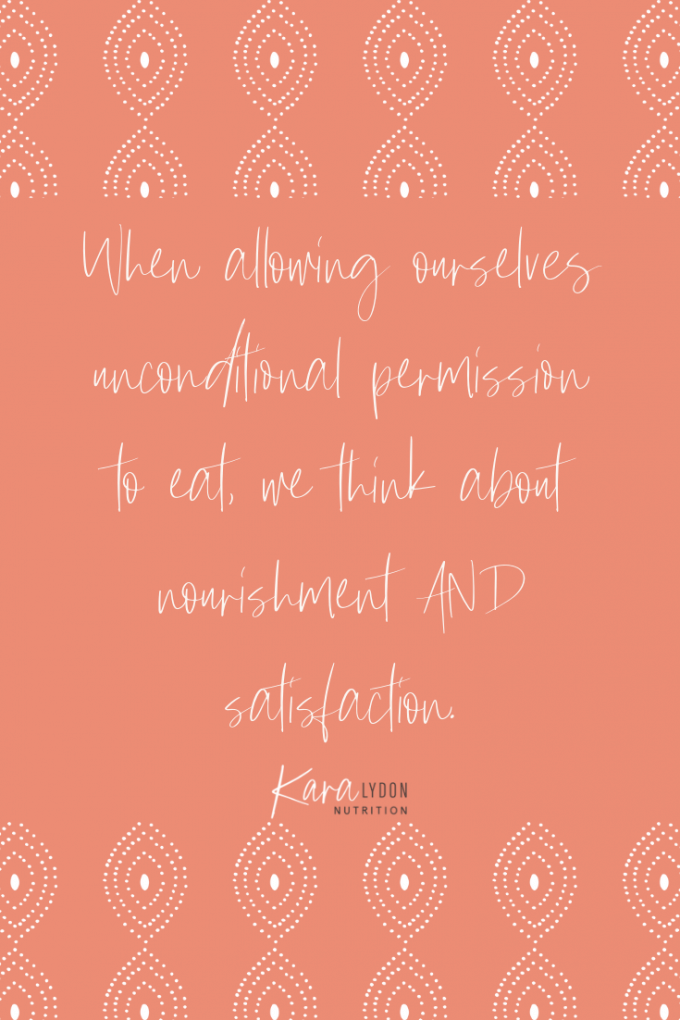 WHAT ARE SOME MISCONCEPTIONS SURROUNDING UNCONDITIONAL PERMISSION TO EAT?

Often times when explaining unconditional permission to eat, people will say, “well what about nutrition?” “what about healthy eating?” “what about healthy vs. unhealthy foods?” I mean if I had a dollar every time someone said “There is a difference between chips and an apple, one is healthy and one is not,” I would be retired by the age of 23 (aka right now). Only eating apples for the rest of my life doesn’t sound like something my body would be down for, but neither does eating chips all day every day. We’re not ignoring our body’s innate wisdom when working towards this permission, we’re working with it and honoring it.

The thing about this principle, is that it’s not about what we consider “healthy” or “unhealthy.” It’s about neutralizing food and giving ourselves, our minds and our bodies permission to experience food free from guilt, shame or stress. I don’t know about you but that sounds like a heck of a lot more relaxing than labeling foods as good or bad. 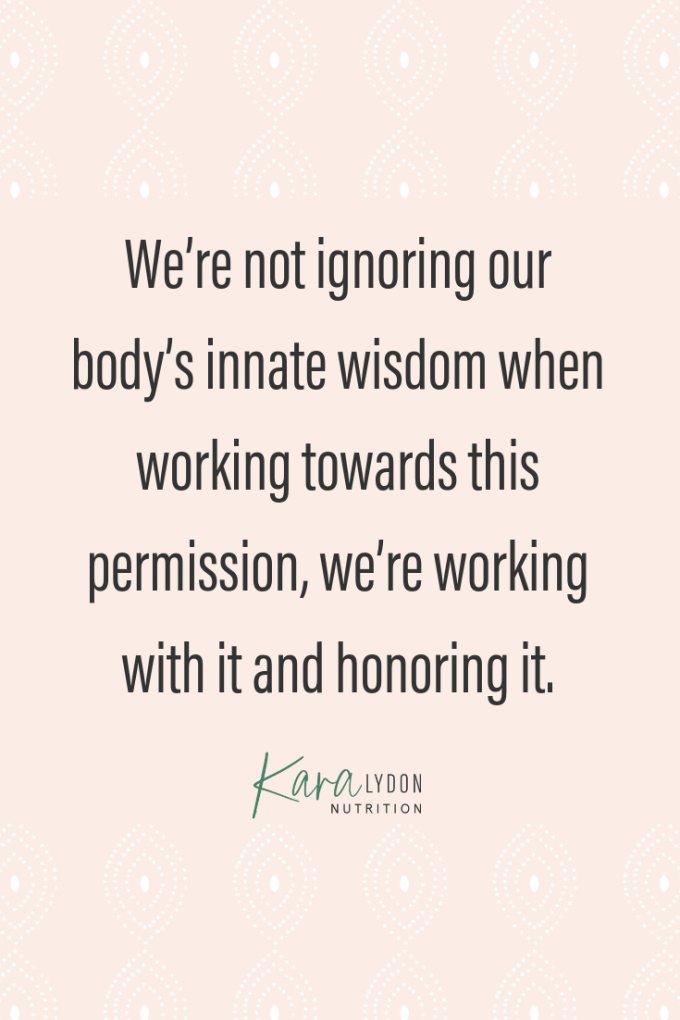 To give ourselves unconditional permission to eat, is not to say that we can eat whatever, whenever and however much we want mindlessly. It’s that we can eat whatever, whenever and however while practicing attunement. We make peace with food AND honor our hunger and fullness. We’re not throwing the other principles of IE out the window when we practice unconditional permission; we’re still checking in, noticing cues, and feeling the satisfaction of foods. It’s not mindless permission; it’s attuned permission. And when we are practicing attuned permission, we can walk away from meals feeling the real benefits of Intuitive Eating and being at peace with food. That’s why there are multiple principles of Intuitive Eating; it can’t be boiled down to one concept.

HOW DO I PRACTICE UNCONDITIONAL PERMISSION TO EAT IN REAL LIFE?

Make a list of the foods you’ve restricted in the past, maybe the foods you feel fearful of or foods that you know you’ve always wanted to eat without feeling guilty afterward. Choose one food from that list and go and get it from the store, order it or make it at home. Be attuned with your hunger, fullness, be mindful of how the food tastes, feels and smells. Eat as much of that food as you need to feel satisfied. If you have some left over, great, if you don’t that’s great too. Remind yourself that you can go back and buy the food, or go back to the cupboard to get the food WHENEVER you want. Repeat this process, as many times as you need to reach that habituation and feel safe around the food. Kara also has a great free resource on how to make peace with food (specifically, carbs) that walks you through this process step by step. You’ve got this! 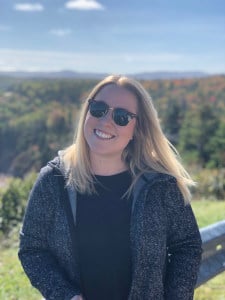 Mikaela is a new dietitian currently working in a Primary Health Care setting. She is a recent grad from StFX University in Nova Scotia, Canada and will sit for the RD exam in the fall of 2019 to officially become a Registered Dietitian. She’s extremely passionate about Intuitive Eating, Health at Every Size and helping clients from a weight inclusive approach. Mikaela is thrilled to join the dietetics profession and work towards dismantling diet culture and advocating for body diversity in the field!