With a new year comes the media feeding you new reasons to diet. Well this dietitian is here to explain 5 scientific reasons why diets don’t work. 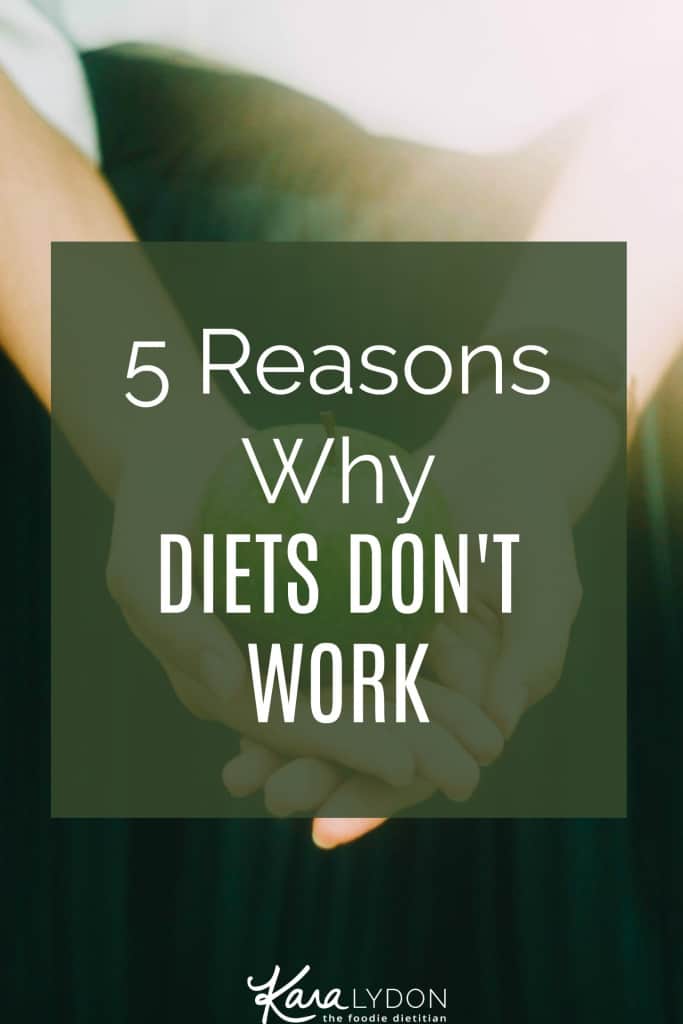 It’s January, which means it’s national dieting month. Which means, you’re probably being bombarded with the promises of a better life tied to the size of your body.

But there are SO many problems with dieting (and by dieting I mean ANY form of restriction, not just programs that call themselves diets, and yes, that includes cleanses and “lifestyle programs”). And I’m here today to explain why diets don’t work and why they are so freaking problematic.

But before I do that, let me just say that I can totally appreciate the allure of dieting. Diet programs have the best professional marketers. It’s no wonder they are a $67 billion industry. They profit off of the notion that you are not good enough as you are. And thanks to the inherent negativity biases we have as humans, we internalize that message and believe that we are less than and need to fix ourselves. So, I get it. And for many people the rules and control and structure of diets are very appealing. But it’s not sustainable. Which leads me to my first reason why diets don’t work.

1. DIETS ARE NOT SUSTAINABLE.

I know the title of my post is reasons why diets don’t work but perhaps I should add at the end of that “long term.” Because I won’t lie to you, yes diets will help you lose weight at first. In the short-term, diets work. But there has never been one study that looks at the long-term effects of a diet past six years (and if you know of one, please let me know!) that shows people were able to maintain the diet and their weight loss for over six years. What the research does show is that 95% of people who diet end up gaining the weight that they lost back. And of that 95%, about two thirds will gain more weight than they started out at. And then begins the vicious restrict/binge, yo-yo dieting cycle. And the literature shows us that weight cycling (losing weight, gaining weight, repeat) is actually more harmful to our health than just staying at a higher weight. One research article that reviewed over 30 studies on dieting concluded that dieting is actually a predictor of weight gain. I truly hope that one day the diet industry will get hit like the tobacco industry did and just like cigarettes now come with a warning on the label, causes cancer, that diets too will come with their own warning: causes weight gain. 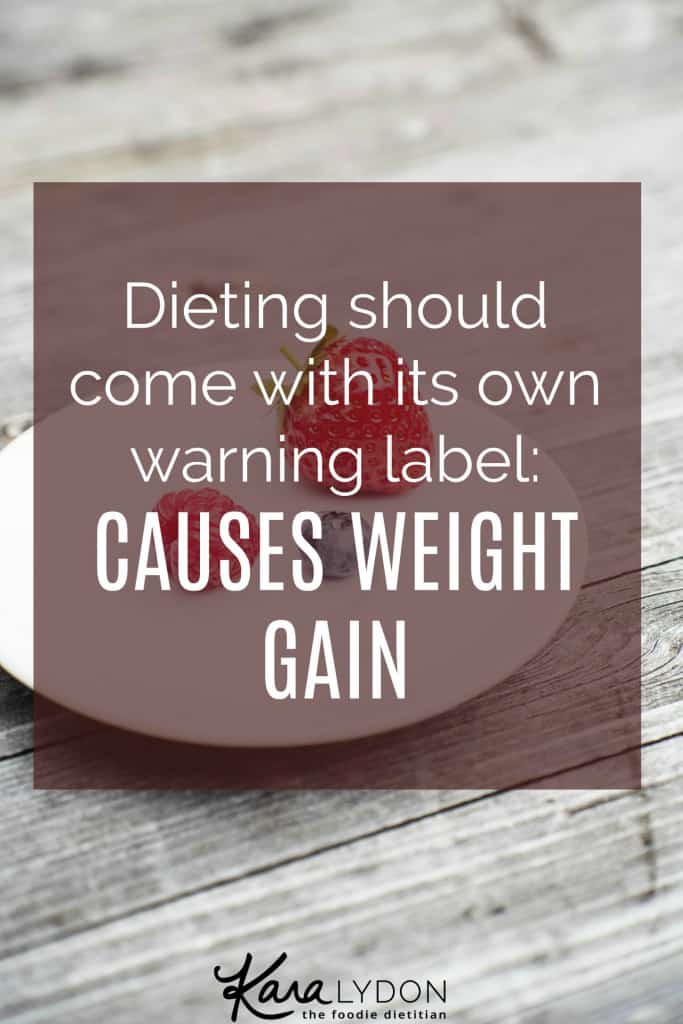 2. DIETING IS A FORM OF STARVATION.

Our bodies are inherently wired for survival. From an evolutionary standpoint, our bodies are designed to protect us against starvation as we had to adapt to survive famines years and years ago. And our bodies are not aware that we are now living in the 21st century, where we no longer have to hunt for our food. So when we diet, it’s as if we’re telling our bodies, there’s a famine happening right now, help me survive. And our bodies compensate to keep us alive. They do so by lowering our metabolism, stimulating brain chemicals to make us think about food, holding onto fat, and shutting down non-essential systems (to survival) like our reproductive systems, which is why many women who are under-eating end up losing their menses. This is why it’s harder and harder to lose weight each time you diet because your body is holding onto its fat stores and lowering your metabolism to help keep you alive. I’ll repeat. Your BODY IS TRYING TO KEEP YOU ALIVE. Your body is not the enemy here. It’s just trying to protect you. The diet industry is the enemy. 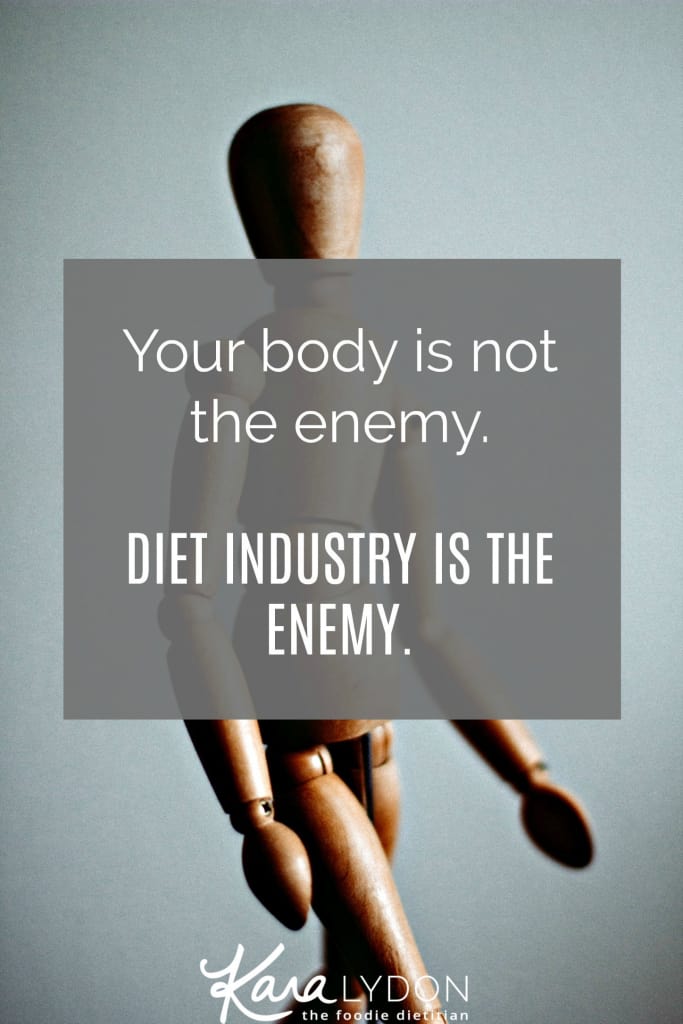 3. DIETS CAUSE YOU TO BINGE.

I have so many clients who come into my office thinking that their binging is purely emotional and they are “emotional eaters.” But upon further assessment, I realize that their binging is actually a biological reaction to deprivation. You know how I mentioned that your body will release chemicals to make you think about food in response to starvation. Well that chemical is called neuropeptide Y (NPY) and NPY is secreted by the brain when you’re not getting enough calories and/or carbohydrates (your brain’s primary source of fuel). NPY increases your motivation to eat, delays satiety and simulates food intake with a preference for carbs. NPY is likely the reason you are craving carbohydrates, not because you are an “emotional eater”. And because NPY delays satiety we feel like we can eat a lot of carbohydrate foods at once, which can feel like a binge. But this is not an issue of control. It is literally a chemical survival mechanism our bodies have to keep us alive and well and in a state of homeostasis (or balance). Dieting and restriction, aka not getting enough energy and enough carbohydrates, cause us to binge.

4. DIETS MAKE YOU OBSESS OVER FOOD.

There was a research study conducted in the 1940s on a group of 36 men to observe the effects of food restriction. Their calorie intake was cut in half for a period of six months and not only did the researchers observe mood changes like irritability, fatigue, and lack of motivation, they also observed a preoccupation with food. On subject wrote, “They would coddle [the food] like a baby or handle it and look over it as they would some gold. They played with it like kids making mud pies.” Another subject wrote, “Stayed up until 5 a.m. last night studying cookbooks.” The men started to rip out recipes from cookbooks (and this is before the days of Food Network and Pinterest!), they began stealing food, others chewed up to 30 packs of gum per day. Not to mention the weird rituals noted like licking the plates clean, holding food in their mouth for a period of time before swallowing and laboring over the combinations on their plate making “weird and distasteful concoctions.” People often think that it’s their fault they are thinking about food all the time. But it’s actually just a biological reaction to restriction. Of course you’re going to be preoccupied with food because your body is hungry for fuel! Once again, our bodies are just trying to do their job. And once again the diet industry is making us think that something is wrong with us. 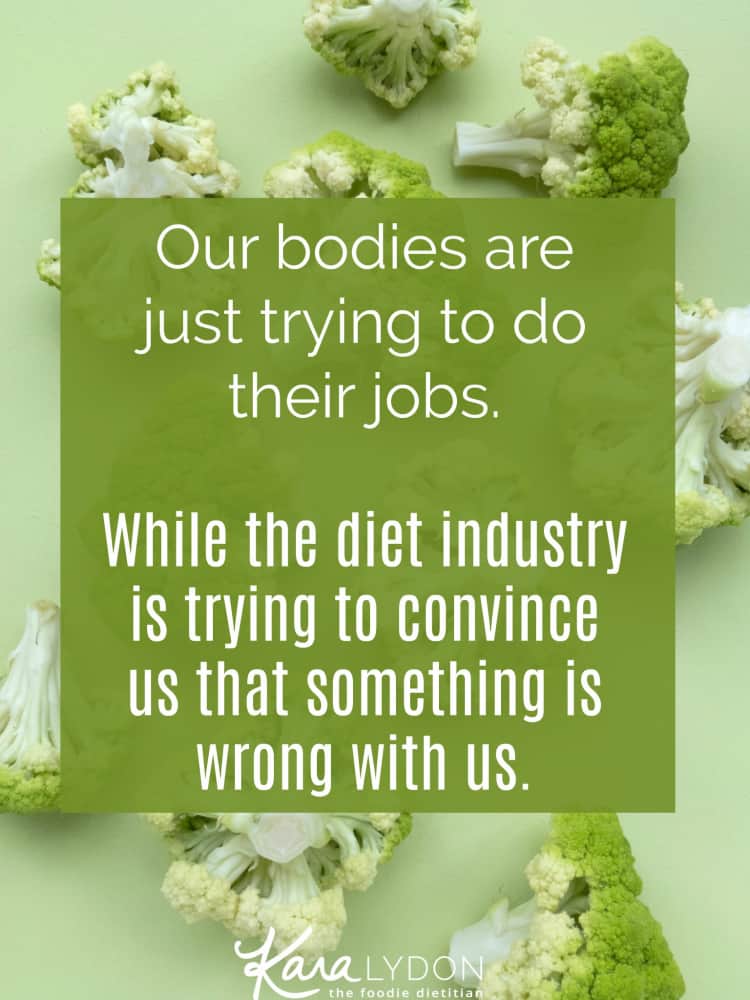 Has a diet program ever told you that you’re addicted to XYZ food? Well, I’m here to tell you that the science is very limited in supporting that food addiction is real. And if you want to learn more about the research limitations, head over to my RD pal Marci’s blog. But the basis of the food addiction theory model is that food shares common drug pathways in the brain and food can activate reward neurons. But what they fail to consider is that research shows that those reward/pleasure centers light up even more in response to a food that has been previously restricted. So when a food is off limits, like ice cream, your brain is going to register that ice cream as even more pleasurable than if it wasn’t restricted. Because as humans, we are driven by our unmet needs. Meaning if you put a toddler in a room filled with hundreds of toys and you tell them you can play with any toy in this room except for this blue truck, guess which toy they’re going to want to play with? Same idea with food. If you tell yourself a certain food is “bad” or off limits, that is going to be the food that you’re thinking about and craving. It’s the bad boy effect – we want the thing that we tell ourselves isn’t good for us. It creates this allure and appeal. So if you think you’re addicted to [insert food of choice here], it’s likely that you’re not truly addicted; it’s the dieting and restriction of that food that is actually causing you to think about it and crave it.

Do you have more reasons to add to this list of why diets don’t work? I’d love to hear them! Leave them in the comments section below. And if you’re ready to ditch dieting once and for all, sign up for my 1:1 virtual (or in-person in Boston) nutrition counseling – I still have a few spots left for the new year!