How Intuitive Eating Changed My Life

Hey guys…I originally planned to share a new recipe (well technically an updated old recipe) with ya’ll today but no one is carrying fava beans yet in Boston. Not even frozen, unshelled fava. Boo. But instead of leaving you hanging without a new piece of content this week before I leave on my trip, I decided to write about something that’s been on my mind for a while now. My true story about how I got into nutrition. The long, real version. Not the short, safe version I used to serve up in the past. And how using intuitive eating in my coaching practice has challenged me to look at some of my own thoughts and beliefs around food. You’ll see how intuitive eating changed my life, really. 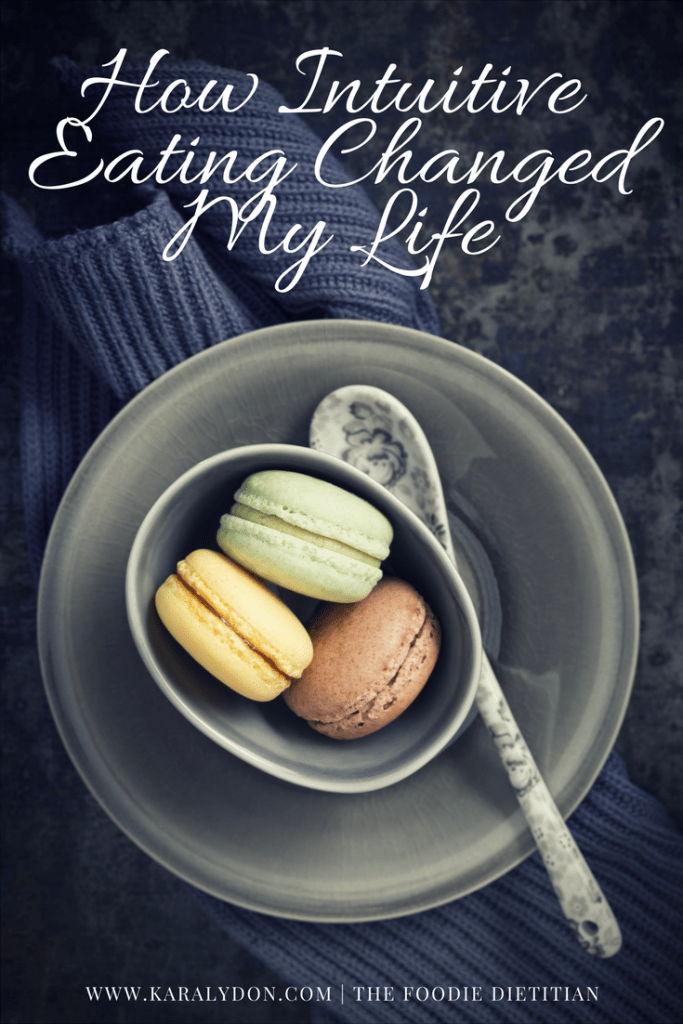 A few years ago, I wasn’t owning my nutrition story. When people would ask me how I got into the field, I’d tell them I became a vegetarian at a young age and as a result had to learn about nutrition and how to make sure I was nourishing my body as a pre-teen veg. Later as I got older, I was introduced to alternative medicine therapies like homeopathy and naturopathy and I became interested in the idea of using food as medicine (more on that subject via guest post next week). And all of that is true – it’s not like I’ve been lying to everyone but that version is the short, safe one. Not the entire story.

So why was I hesitant to spill it all? Well, it all stems back to when I was a senior in college, majoring in nutrition and getting ready to apply for my dietetic internship (a DI is your clinical experience to become a registered dietitian nutritionist). We had some kind of DI fair where all the local DI directors came to talk about their programs and there were a couple lectures about the application process, essay writing, etc. And one thing they said hit me like a ton of bricks and I could feel the shame rising up in me.

“If you have an eating disorder or have had an eating disorder in the past, do not talk about it in your essay or application – you will not get matched if you do. And you should reconsider going into this field too – you won’t be an effective counselor…”

I stopped listening. I felt a pit in the bottom of my stomach. I started sweating. I felt so. much. shame. And in that moment I decided I would bury the story of my eating disorder so I could become a dietitian.

And the short, safe story lived on.

Until a year ago…

I’ve read a lot of Brene Brown over the last few years and she talks a lot about shame and owning your own story. And she says that in order to combat shame, you have to speak it. The more you keep it inside and let it harbor, the more it grows and takes over.

I was done harboring my shame and hiding behind my true story. When I was writing my e-book, Nourish Your Namaste, this time last year I decided I was ready to own my story about how nutrition and yoga saved me. To tell the whole story. The one that’s imperfect and real and beautiful. The one that’s authentically me.

And yes, it involved an eating disorder.

Growing up, I was always the shortest kid in my class. If I had a class to be in today, chances are I’d still be the shortest. And so when I put on some weight when I was ten years old (pre-puberty), I was subject to ridicule in school. Because now I was short and overweight. Girls were cruel. Like really cruel. Like whispering behind my back that they wanted to push me off a cliff cruel. I came home crying many days. And so that’s when I saw my first nutritionist. I don’t remember much of what we talked about in that appointment besides popcorn. Yes, I could still eat popcorn. It was on the “approved” snacks list. I loved popcorn. Phew. But what I do remember is that at no time did any health care professional tell me or my parents that putting on some weight pre-puberty is NORMAL and nothing to be concerned about.

A few years later, more overheard comments about my weight from family and friends, a new best friend with an eating disorder, a big life change of which I had no control over, and my own eating disorder was formed. I restricted my food intake. I lost weight. Too much weight. I stopped getting my period. This lasted about a year or so until one day I remember panicking, “Wait, am I not going to be able to have kids someday?”

And so back to a dietitian I went. This time because I was underweight.

I remember crying in her office. Feeling out of control once again. Thinking that the amount of food she wanted me to eat sounded insane. I felt defeated.

Luckily, the treatment coincided with me going to high school with a new group of friends, all of whom had very healthy relationships with food. I slowly started to heal, to eat what I wanted to eat without guilt, to mend my relationship with food, to rediscover satisfaction from food, to put the weight back on and to restore my period.

And so all of this backstory to say that THIS is the real reason I went into nutrition. I wanted to help girls like me who struggled with eating disorders and their relationships with food.

It wasn’t until I started my own business that I started to reconnect with my original passion for the field. I started coaching clients again and learned about the work of intuitive eating and all the sudden everything felt like it began to click. I started to feel fulfilled in my work again. Like the soul-warming, ultra-gratifying, fulfilled. Learning about intuitive eating also forced me to check-in with my own eating habits and to look more closely at the intentions behind my food choices.

Even though I’ve had a very healthy relationship with food since high school and never felt deprived of the foods that I love, it opened up my eyes to some eating patterns that weren’t totally intuitive. But before I share those with you, you might be wondering what’s intuitive eating (IE), anyways?

The super short version is that IE is eating based on your intuition. It’s eating based on hunger and fullness cues instead of a meal plan. It’s asking yourself “what do I feel like eating right now?” as opposed to “what should I eat right now?” It’s letting go of the diet mentality, ditching the scale and putting weight loss on the back burner. This work is about healing your relationship with food, rediscovering satisfaction from food and making peace with food.

I realized as a dietitian I had fallen into some “should” traps with my own eating. Maybe some of these will resonate with you:

One of the beautiful things about IE is that there’s no such thing as failing at IE and you can’t perfect it either. So just as I remind my clients that this is life long work and it’s about the process, learning as you go, it’s a process for me too. Somedays I might push past hunger to finish a blog post. Somedays I might eat leftovers even if I’m not 100% in the mood for them. But that’s okay! IE isn’t meant to be followed as another set of rigid rules. It’s about flexibility and serves as a framework or guidelines, not rules.

So a very long-winded post just to tell you that IE has changed my life. It changed my life helping me to recover from my eating disorder at a young age (even though no one was calling it IE to me back then), it helped me rediscover my passion for my career in nutrition and it helped me put in check some of my own rules formed from being in the nutrition field.

Today, I am a better coach and dietitian because of what I’ve been through. It helps me to relate better to my clients, to cultivate more empathy and to have a strong passion to help guide them through this work. Because I know what it feels like to struggle with food but I also know what it feels like to rise up and celebrate food. And that freedom is what I want for all of my clients.

If you struggle with your relationship with food and would like to make peace once and for all, I’m currently seeing clients virtually via Skype as well as in-person in the Greater Boston Area. You can read more about my coaching services here: https://karalydon.com/coaching/

I’m arriving in Ho Chi Minh city today for a 3 week Southeast Asia adventure with my hubs. Vietnam was our original top pick for our honeymoon destination…until we realized September is their monsoon season. Hence, delaying the trip until now. We’ll make our way up the coast of Vietnam and spend some time in Laos as well. I’m going to try and disconnect as much as possible but you’ll still hear from me and I’ll try to post about my trip while I’m over there! Much love.