One Night Cruise in Halong Bay with Bhaya Cruises

Continuing my Vietnam travel series, a recap of our night cruise in Halong Bay with Bhaya Cruises! 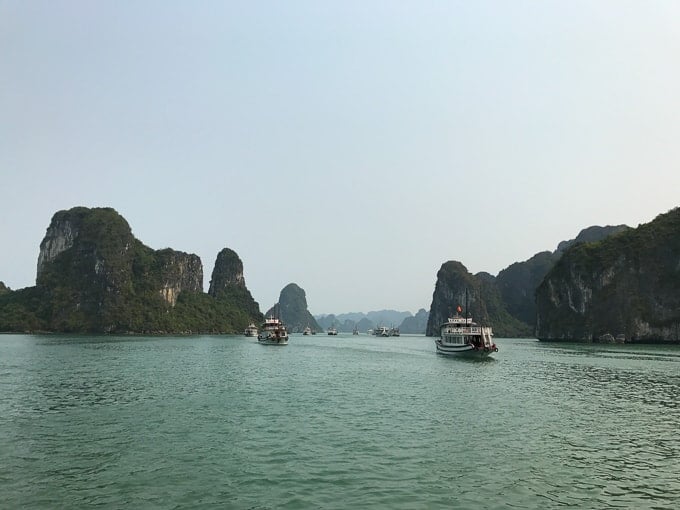 Ok five down. One more (Hoi An) to go. These Vietnam trip recaps have taken me longer to get up than I would’ve liked but I figure it’s better late than never! If you missed them, be sure to check out two days in Ho Chi Minh City, five days in Hanoi, the best Hanoi street food tour, and five days in Luang Prabang.

I’m excited to share with you our experience in Halong Bay with the cruise company we chose. I hope that we can help you not make the same mistake we did!

Ok, so Halong Bay in a nutshell: unbelievable. Designated as a UNESCO World Heritage Site, Halong Bay is a scattering of 1,000 islets and limestone pillars and Northern Vietnam’s #1 tourist destination. I’m not going to lie to you though and say it was all unicorns and rainbows. I was expecting pure, natural beauty in Halong Bay but to my dismay, there was so much trash and litter in the water, it made me really sad. The tourist footprint was so obvious and it made me angry that people could tarnish such a beautiful place and take away its pureness. Maybe that’s one of the reasons that some tourists are foregoing the Bay all together and heading straight to Cat Ba Island or Lan Ha Bay. If I had to do it over, I probably would skip touristy Halong Bay and go straight to one of these other less crowded destinations (although Cat Ba is getting more and more popular). 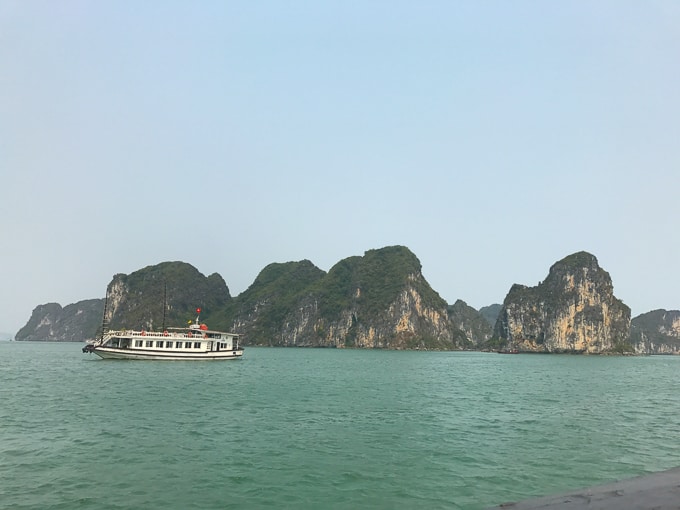 The other word of advice I have to you is if you’re thinking about booking with Bhaya Cruises and are wondering whether to do the classic or premium cruise, stick to the classic. The premium boat is more intimate (and a little more $) and Steve and I were originally thinking we would want some quality peaceful time on the cruise but two weeks into the trip we realized that couldn’t be further from the case. We were ready to mingle, make more friends and socialize with other people. I mean, don’t get me wrong, I love spending time with my husband but spending two weeks straight with someone 24-7 is going to get old.

The thing we didn’t realize about the premium cruise is just HOW intimate it was. We had four other people on the boat with us. One. Two. Three. Four. They were two middle-aged couples from Switzerland and Germany who spoke fluent German but very little English. So the entire cruise was awkward social interactions between the couple who was hitting it off and then Steve and I. We WISHED we were on the classic. I mean don’t get me wrong, if there had been other couples our age on the boat who spoke a little English, I’m sure we would’ve had a blast but that’s a risk you have to be willing to take when you book the premium.

We made the best of it though! I mean we were in one of the most beautiful destinations in Vietnam, how could we not? Once we got to Halong Bay, we went kayaking through some caves. Good thing other people had headlights on in front of us because it was DARK! And our tour guide was like no you don’t need one, you’ll be fine lol. 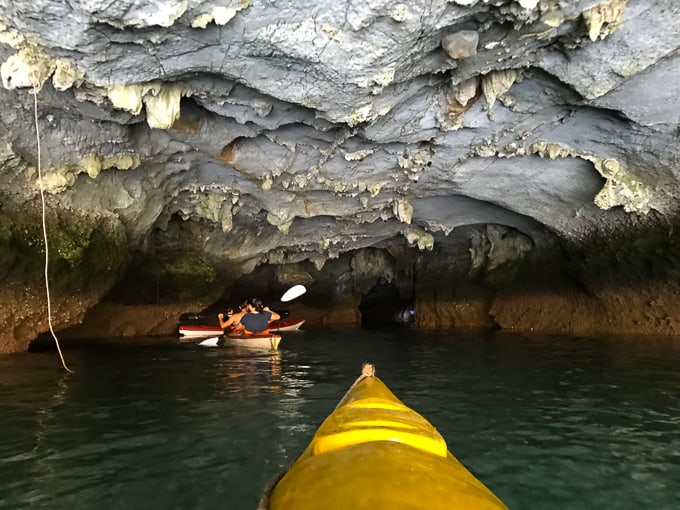 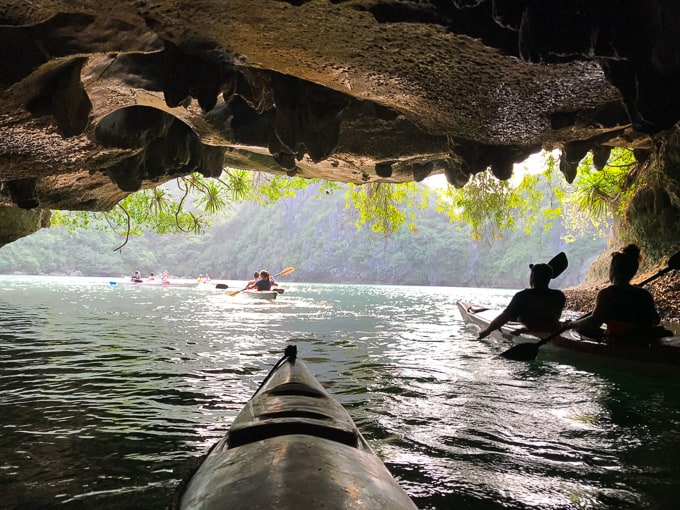 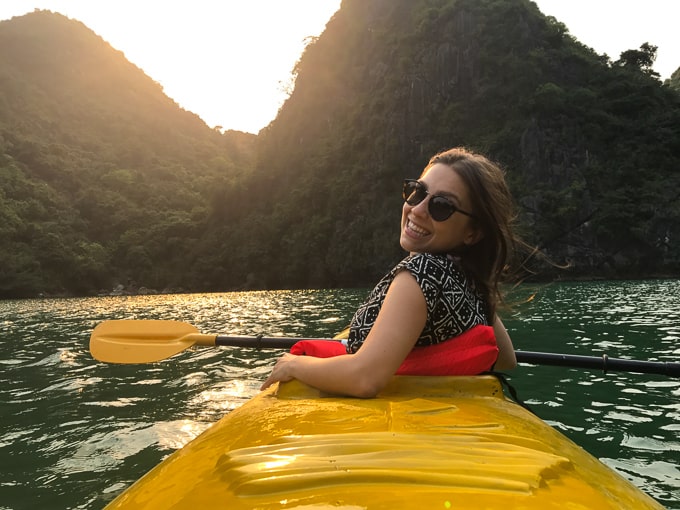 And then we took a quick dip in the bay! And took awkward jumping photos. 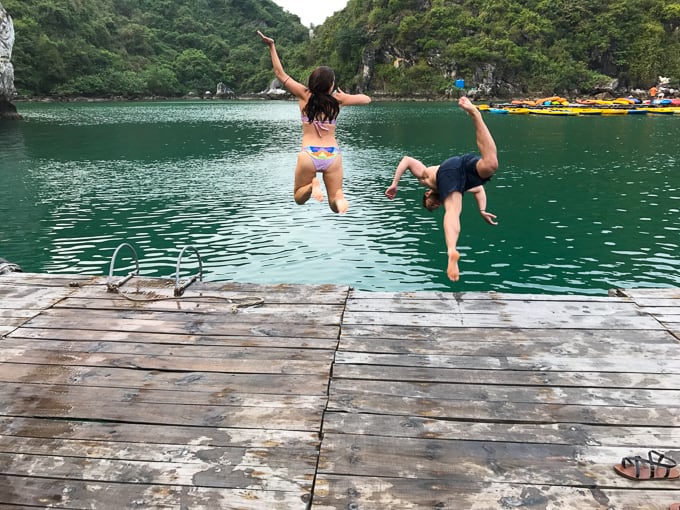 We went back to the boat, showered and got ready for happy hour! And with the awkwardness on the boat, we sure needed it. 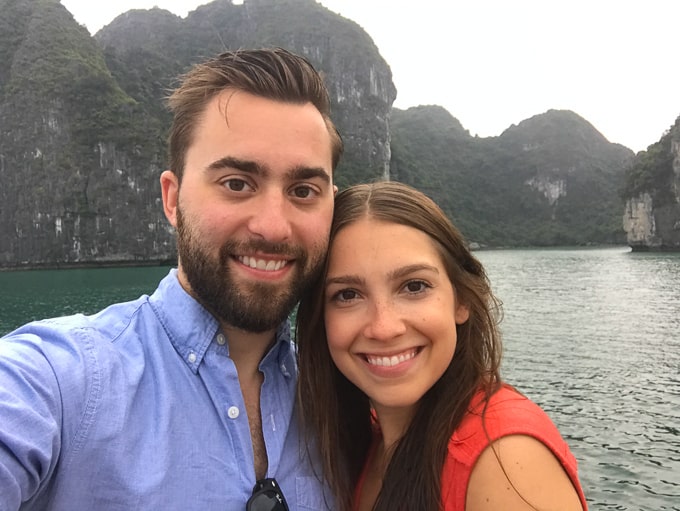 By then the sun was beginning to set and it was gorgeous…until it went behind some clouds and we didn’t see it again lol. 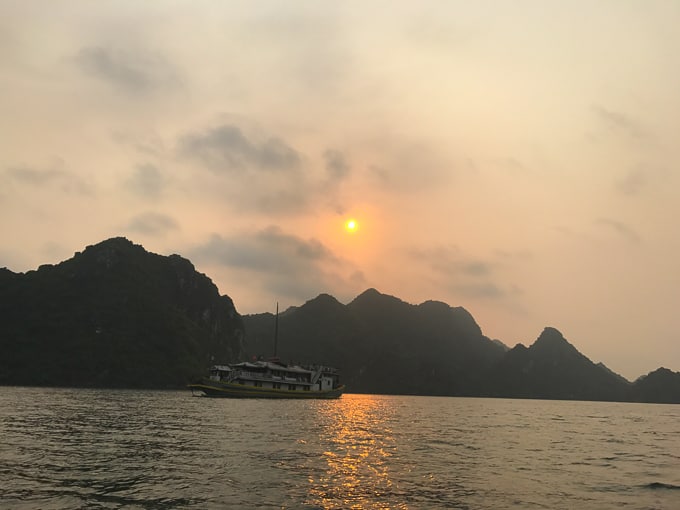 Dinner was interesting…we started off with some prawns and oysters. 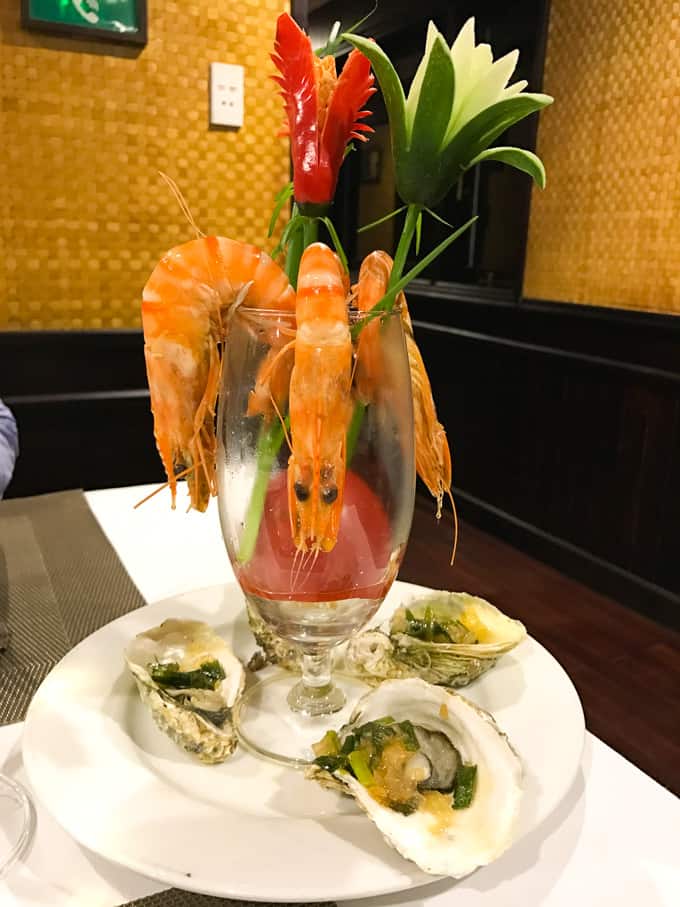 Had some spring rolls (which we rolled during the happy hour on deck!) 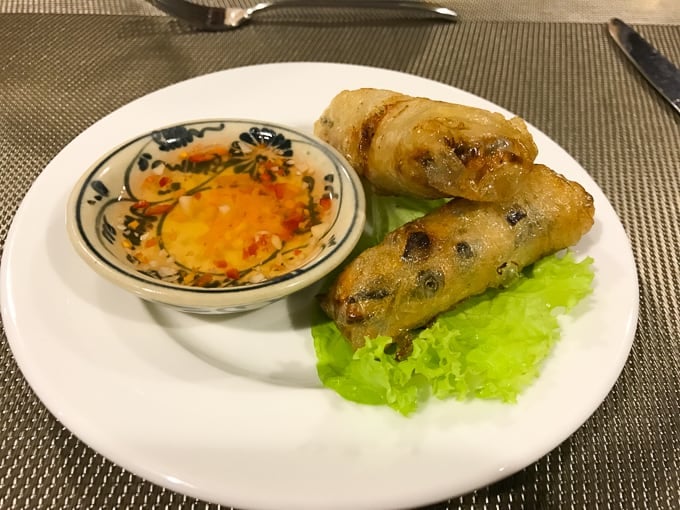 Cream of pumpkin soup. I think we might have had some fish too but I didn’t take a picture of it and I forget lol. 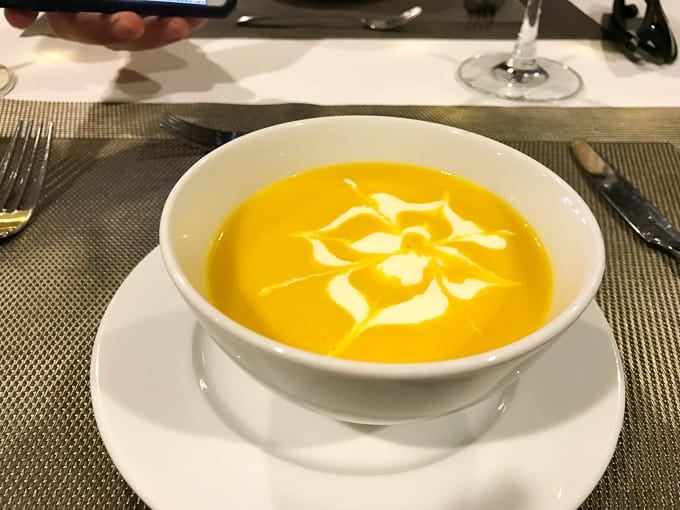 And a cake for our “honeymoon”! We called this honeymoon part II because it was our original top honeymoon destination (before we realized September is monsoon season in Vietnam). 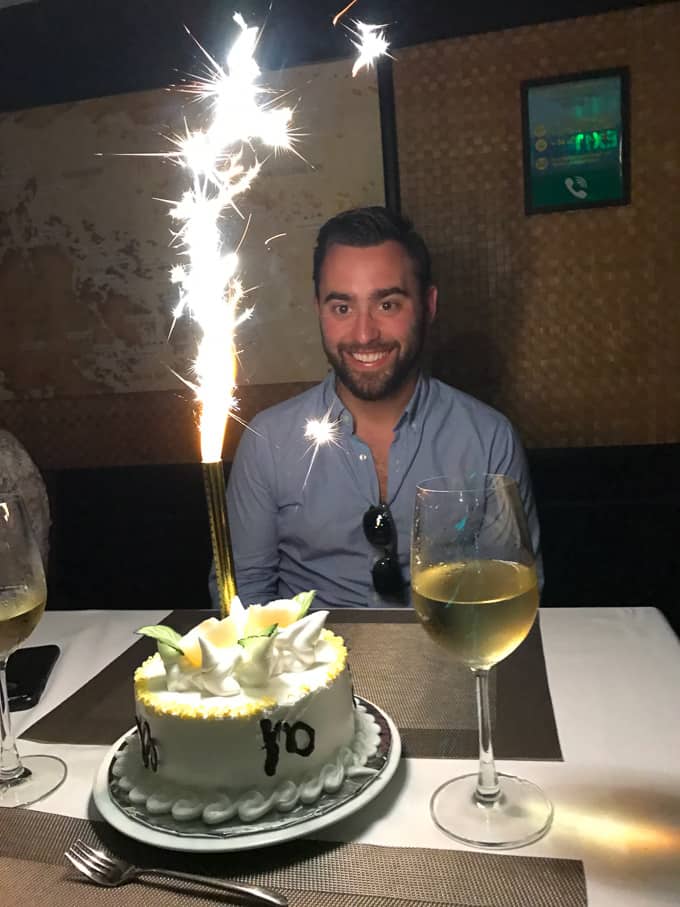 The next morning was overcast and rainy – we went to a nearby cave for a cave tour. This was my first cave tour so I was pretty excited about it. Also, you know you love this hot rain gear I borrowed from Steve ;). That hood though. 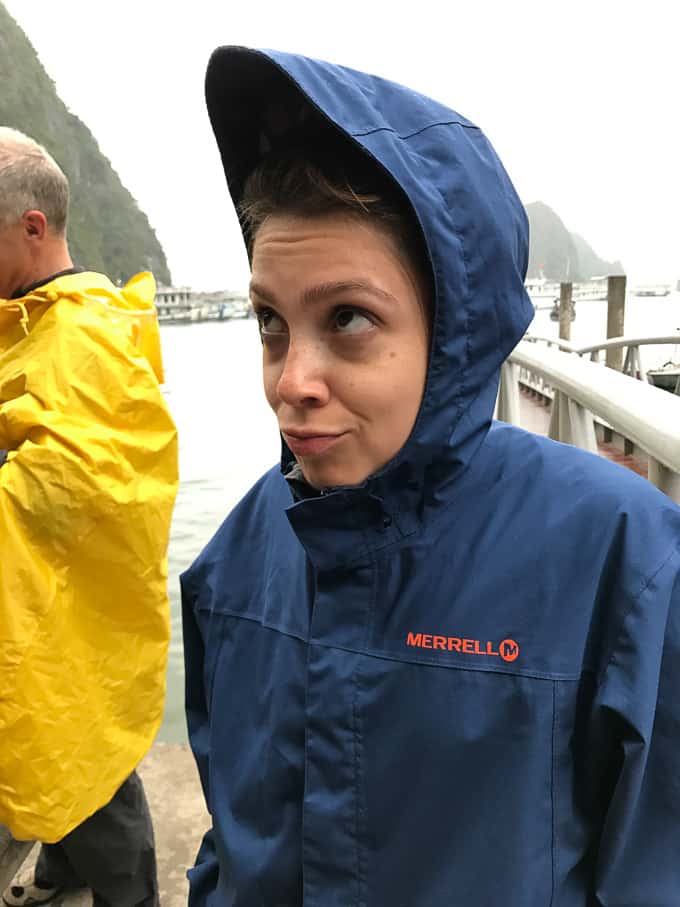 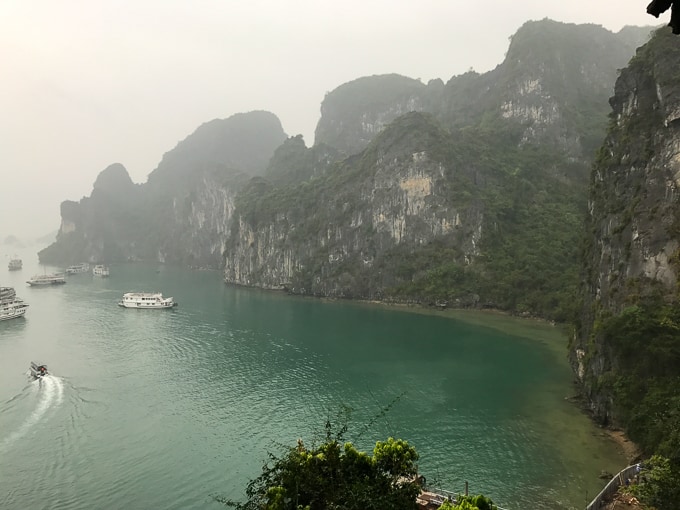 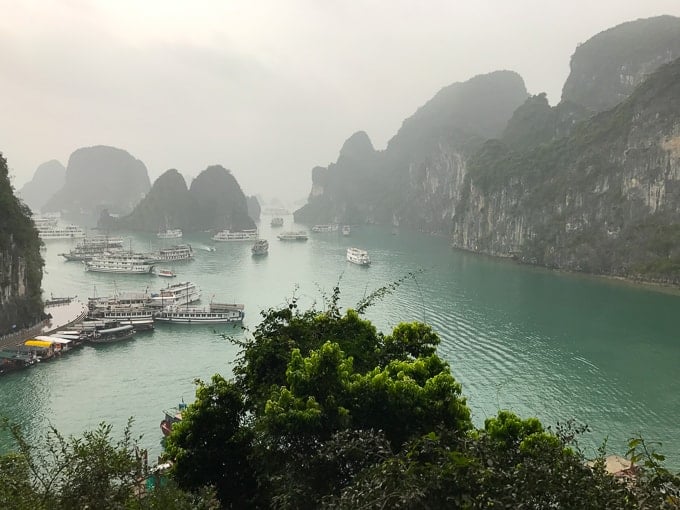 Walking inside a cave is a pretty wild experience. I highly recommend it if you get the chance. Granted they had colored lights all throughout the cave to highlight elements which sort of detracted from its natural beauty but I still thought it was still really cool. 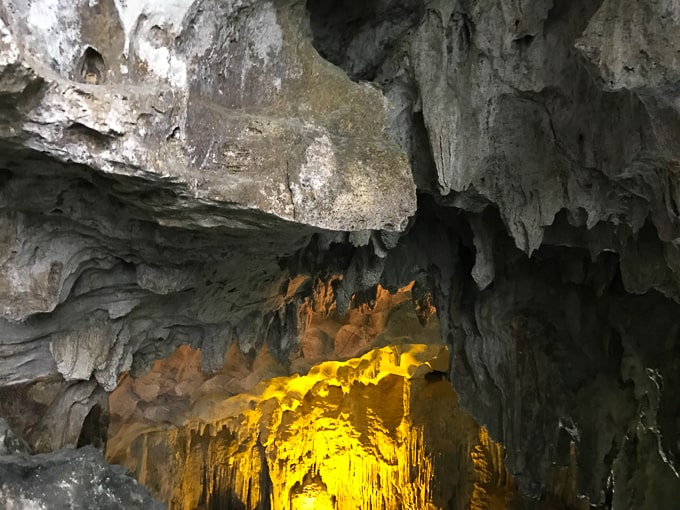 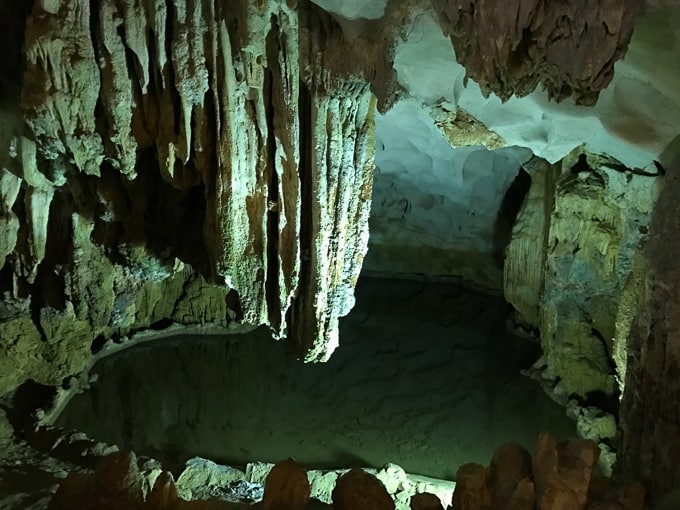 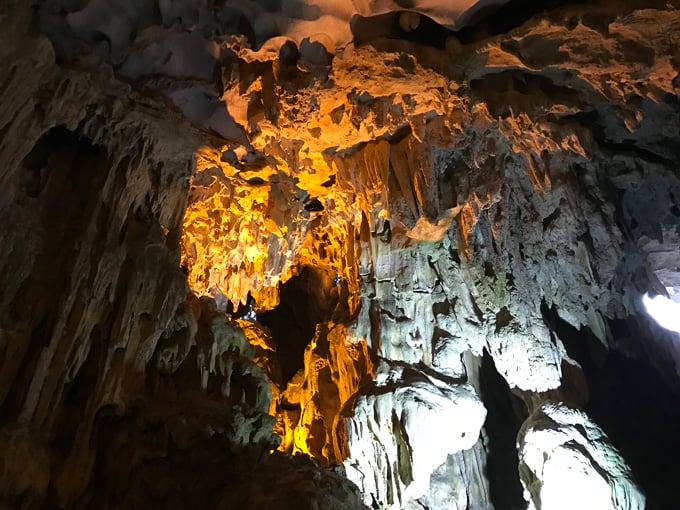 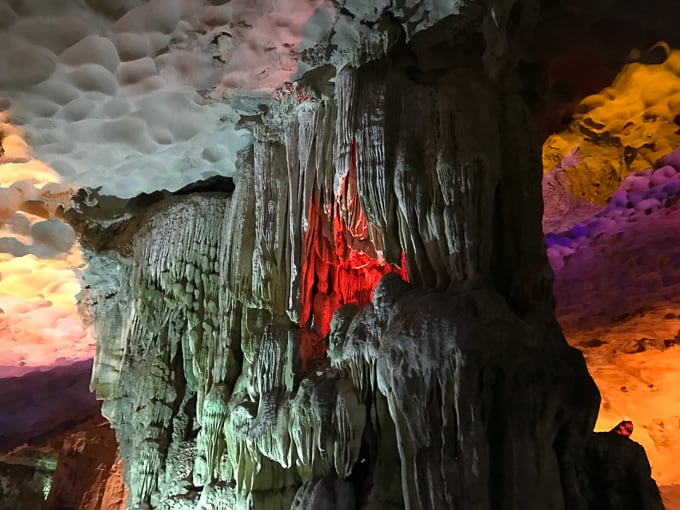 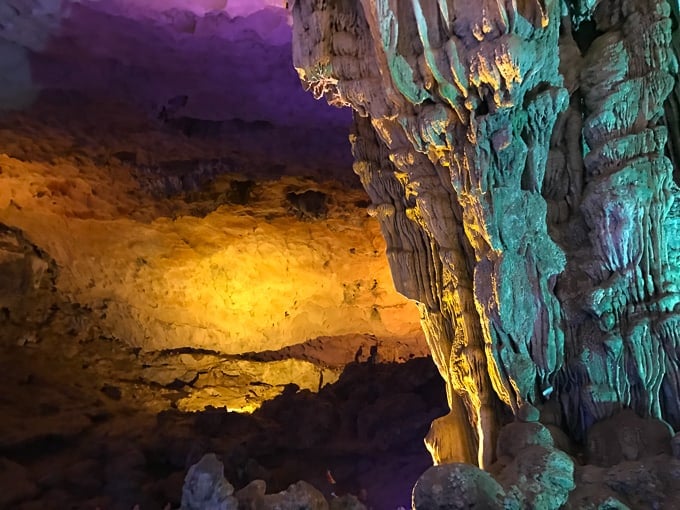 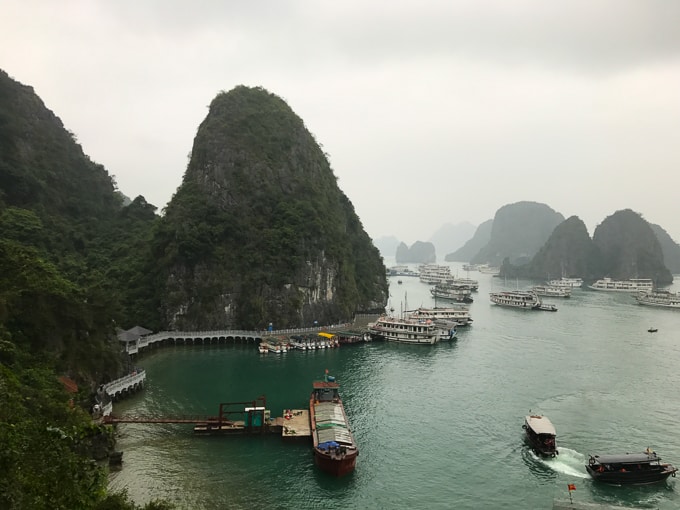 The cruise is marketed as one night, two day. But don’t be fooled, it’s a quick, 24-hour excursion. If Halong Bay is one of the destinations you’re most excited about, do a 2 or 3 day cruise to really settle in and explore some of the other less crowded areas. From Halong Bay, we went back to Hanoi for a few more days and the best street food tour ever!

For more Vietnam and Laos travels, check out my posts below! 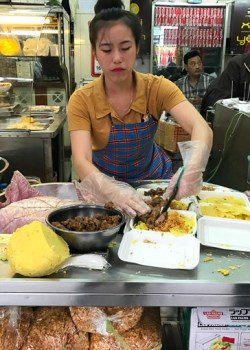 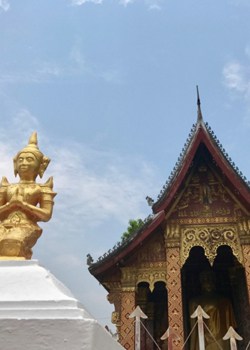 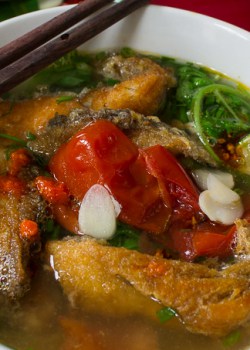