Ever wonder why you feel out of control with food the day before starting a new diet? It’s called the last supper syndrome and we’re explaining the science behind it and how to combat it. 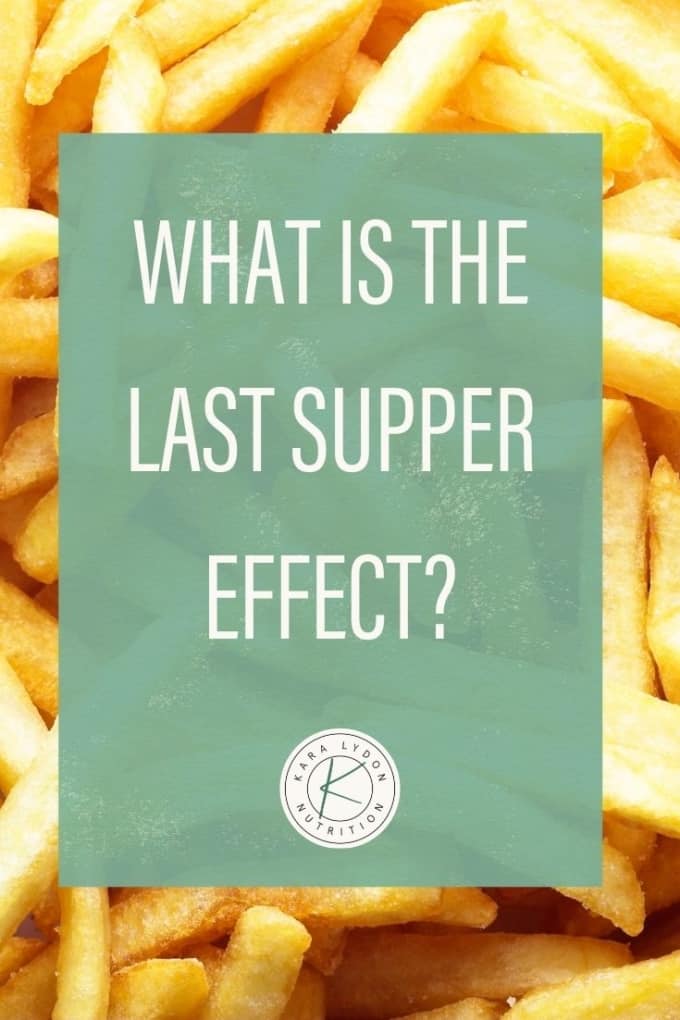 This post was written by our dietetic intern Gaby Cohen. Originally from Venezuela, Gaby just completed her Masters in Nutrition and Health Promotion and the Dietetic Internship in the eating disorders concentration at Simmons University in Boston. After becoming a registered dietitian, Gaby is hoping to work in the eating disorders field to aid children, adolescents, and young adults in healing their relationship with food and their bodies using intuitive eating, mindfulness, and family based therapy approaches.

What is last supper syndrome?

Picture this: It’s Sunday night, you’re getting ready to say goodbye to the food freedom you had over the weekend (maybe you called it a “cheat day”) and preparing yourself to “get back on track” tomorrow. You end up eating beyond fullness because you don’t know the next time you’ll be able to have the foods you enjoyed over the weekend. You feel guilty, ashamed, and convince yourself you can’t be trusted around these foods.

Does this sound at all familiar to you?

Let me introduce you to what we refer to as the last supper effect or syndrome. It’s that impulse to consume the foods you’re about to swear off with your new diet or “lifestyle” because you don’t know when you’ll be able / allowed to have them again.

Why does this happen?

Have you ever decided to start a diet on Monday and then spent the weekend gearing up for this upcoming diet by gorging on all of your favorite “guilty pleasures” as if every meal/snack is your last? You are not alone!

It’s the power of a scarcity and restrictive mindset around food. What happens when you’re told you can’t have something? Generally you want it even more than before. It’s like when you tell a toddler they can play with any toy in the entire room except for the blue ball. Guess which toy they’re going to want to play with first?

Research has shown that restricted access to food and even the anticipation of restriction is linked to an increased tendency to eat that food in a binge-like fashion. One study showed that when restrained eaters (those who were dieting or restricting their intake in some capacity) were told that they would begin a week-long, low-calorie diet starting immediately after their participation in a cookie taste-rating task, they ate more cookies than the unrestrained eaters and the restrained eaters not asked to diet afterwards.

Similarly, in a recent study, when participants were exposed to an environment where they were permitted to eat a higher amount, restrained eaters did eat significantly more than the unrestrained eaters.

How can you combat the last supper syndrome?

Conquering the last supper syndrome takes practice, patience, and effort. Here is where intuitive eating comes in with its principles such as letting go of the diet mentality, honoring your hunger, making peace with food, and unconditional permission to eat.

Here are 3 steps you can take now to practice combatting the last supper effect: 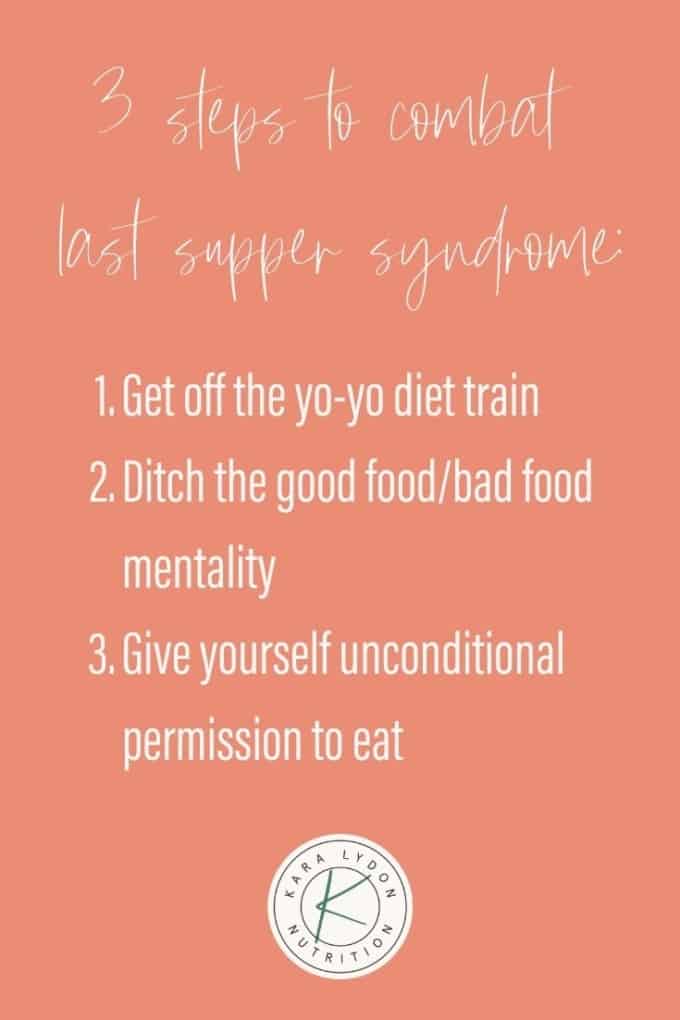 1. Get off the yo-yo diet train

Let’s reject the diet mentality by removing the need to start a new diet every Monday because of that constant feeling of not being good enough as we are, and the guilt trip that ensues after enjoying a weekend of delicious food with friends and family. Food is meant to be enjoyed! If it wasn’t, what would be our incentive to engage in a behavior necessary for our survival?

Why does the yo-yo dieting train even exist? Why do we feel that we’re constantly on a diet / off a diet? Because diets inherently don’t work long-term and are bound to fail. That is why the diet industry is worth $78 billion – they profit off of repeat customers and knowing their programs don’t work.

To reject diet culture, give back the power to your internal wisdom. Reject the arbitrary rules that come along with dieting and start listening to your body for hunger and fullness cues, food preferences, cravings, and the satisfaction factor. Remember, you are the expert of your own body, not some diet company.

Diet culture loves demonizing foods. Let’s get something clear, there are no “good foods” or “bad foods”. It is all just FOOD. They all have their place and purpose and they all provide energy and nourishment to our bodies.

Fruit and vegetables have nutrients in them that support health such as fiber and vitamins. Protein-rich foods such as meat, fish, eggs, tofu, and legumes are good for repairing tissue and have a positive impact on hair, skin, and muscle quality. Dietary fats such as olive oil, cheese, and avocado are necessary for vitamin absorption and for flavor addition. Candy, chocolate, and cookies provide you with energy, satisfaction, and pleasure. Each of these foods gives us different things but that doesn’t make them “good” or “bad” and doesn’t make us good or bad for eating them. 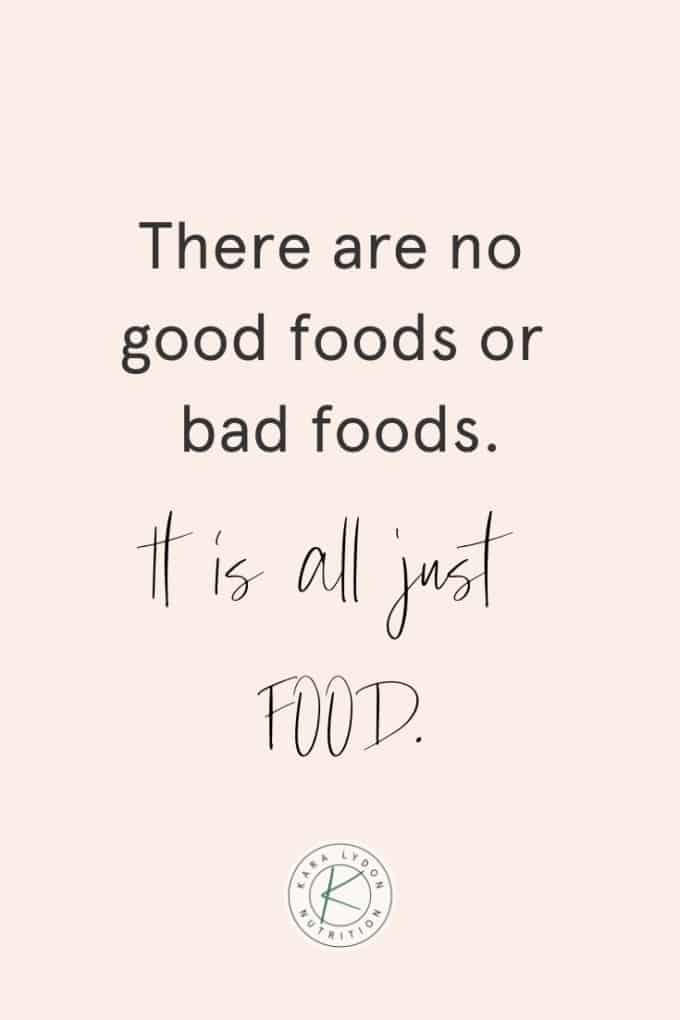 The next time you find yourself labeling a food as good or bad, challenge yourself to call that food for what it is – an apple or a cookie. Remind yourself of the purpose that it’s serving for you.

3. Give yourself unconditional permission to eat.

When you give yourself unconditional permission to eat, no foods are off limits. This helps to put food on more of a neutral playing field, rather than some foods being held up high on a pedestal.

With unconditional permission to eat all foods, you can remind yourself that you can have previously off-limit foods any time you want them. Food will still be pleasurable but with food being more accessible, you’ll likely find that the pleasure response is less intense and you feel less compulsive around food.

In fact, research has shown that pleasure centers in the brain light up more in response to food that’s been off limits. So when a food is off limits, like ice cream, your brain is going to register that ice cream as even more pleasurable than if it wasn’t restricted, leading to the cycle of loss of control, binging, guilt, and the drive to try a new diet, hence one last supper.

It’s extremely hard to not fall into the last supper effect and if you’re struggling with this, you’re certainly not alone! If you need more support around this, I’d invite you to consider working 1:1 with an intuitive eating counselor who can help you more with the strategies listed above.