Home » Health & Wellness » Is Intuitive Fasting Really Intuitive or Is It Just Another Diet?

Is Intuitive Fasting Really Intuitive or Is It Just Another Diet?

Intuitive fasting has gained a lot of attention in the media lately but is it really intuitive or is it just another diet? We break down the Intuitive Fasting program and analyze it from an Intuitive Eating lens. 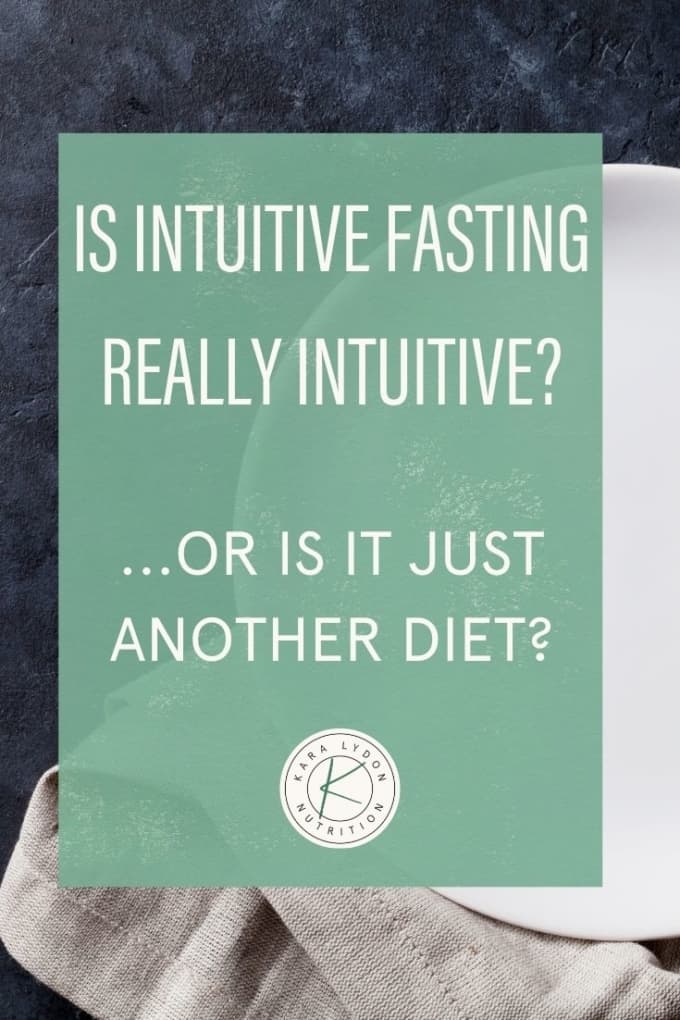 This post was written by our dietetic intern Gaby Cohen. Originally from Venezuela, Gaby just completed her Masters in Nutrition and Health Promotion and the Dietetic Internship in the eating disorders concentration at Simmons University in Boston. After becoming a registered dietitian, Gaby is hoping to work in the eating disorders field to aid children, adolescents, and young adults in healing their relationship with food and their bodies using intuitive eating, mindfulness, and family based therapy approaches.

What is Intuitive Fasting?

Diet culture loves masking fad diets with intuitive eating language. A recent example of this is Intuitive Fasting, a new book by Dr. Will Cole, a certified functional medicine practitioner. This book is a proposed four-week intermittent fasting plan that claims to “recharge your metabolism and renew your health”. Cole defines intuitive fasting as a flexible intermittent fasting program. The book and program recently gained attention when it was promoted by Gwyneth Paltrow, celebrity and founder of Goop, a lifestyle brand.

What is Intermittent Fasting?

Intermittent fasting, referred to as an “eating pattern” rather than a diet (but is most definitely a diet), cycles between periods of fasting and eating. It doesn’t specify which foods you should eat but rather when you should eat them. There are different proposed methods to practice it, all based on time restriction, such as eating for 6 hours and restricting for 18 hours, or an overnight fasting of restricting for 12 hours. In the last few years, it has gained popularity as a weight loss diet.

What does intuitive really mean anyway?

Being intuitive has been defined as having the ability to know or understand something instinctively and instantly without any rational process. It’s a deeper knowing that comes from within as opposed to external forces. Specifically for eating, it means turning inward to identify and honor our hunger and fullness signals, and know what we’re in the mood for without taking into account arbitrary, external rules related to what or when to eat.

Can Fasting Be Intuitive? 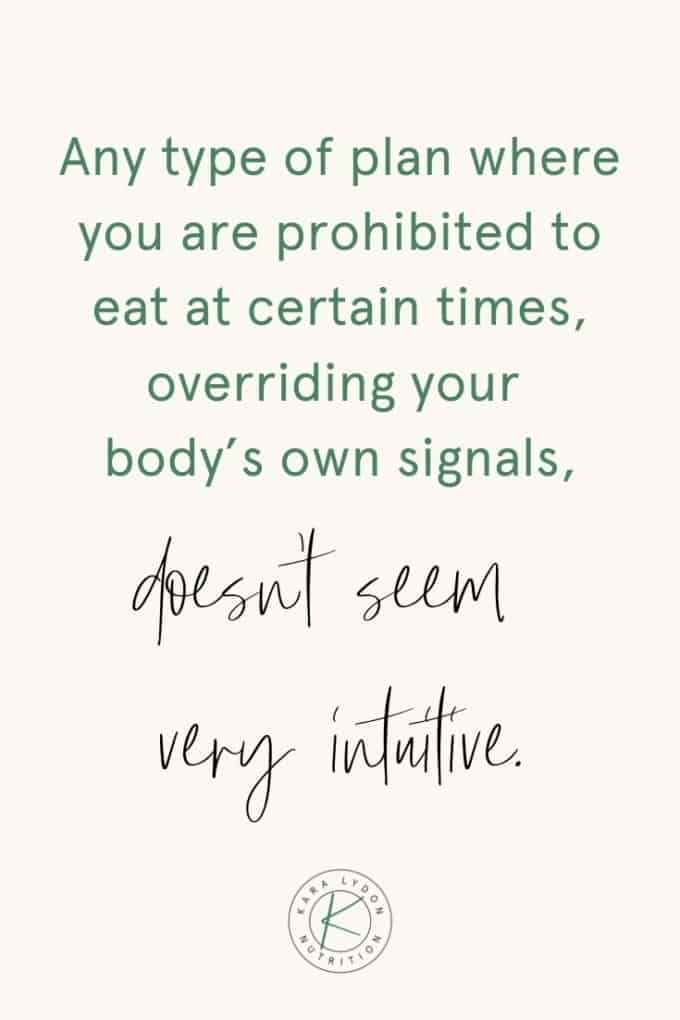 One of the main goals of Intuitive Eating is to help people learn how to tune into their bodies’ signals and cues and to respond to what their bodies need. Meanwhile, any type of fasting asks you to abstain from eating for a specific period of time such as set hour ranges or even days. Any type of plan where you are prohibited to eat at certain times, overriding your body’s own signals doesn’t seem very intuitive.

Intuitive or Intermittent fasting and other diets rely on external cues that dictate when and what you can eat. Examples of external cues are what types of foods to eliminate (no dairy, no gluten, no meat, etc.) when to eat (start and stop at a certain time), and how much to eat (dictating portion sizes). On the other hand, Intuitive Eating relies on internal cues such as hunger, fullness and satisfaction factors.

What does this program have to say about Intuitive Eating?

Will Cole said in an interview that there is only a certain sect of the population who can truly   get intuitive eating right out of the gate, which are folks without any health problems, whose hormones are balanced, and food and weight has never been an issue for them. He said, “Intuitive eating sounds nice but for it to be something for more than just a vapid sound bite that sounds sexy on instagram, we need to show up for ourselves to gain metabolic flexibility”.

He says that until you are metabolically flexible, you can’t truly be an intuitive eater. The opposite, he describes as metabolic rigidity, which shows up as a sugar rush, feeling hangry, fatigued, or hormone imbalances. He claims this so-called metabolic rigidity is going to drown out your intuition, to know what your body needs to feel great, which can result in stress eating or insatiable cravings.

Let’s start by getting something clear, intuitive eating has never been intended to be something you will get right out of the gate. It is a journey on which you will explore the different principles to better understand your relationship with food and your body, with the goal of freeing yourself from chronic dieting and rediscovering the pleasures of eating.

Also, can we just talk about how being hangry and fatigued is a normal part of being a human being? According to Cole’s description, myself and everyone I know would be flagged as having “metabolic rigidity.”

Tell me more about this concept of metabolic flexibility.

In his program, Cole advises to gradually use longer periods of fasting to allow people to re-adapt to burning fat for fuel instead of carbohydrates; the ability to do both is known as metabolic flexibility. He states that by gaining the ability to burn both, people will have a healthier relationship with food and be able to trust their bodies.

This concept of metabolic flexibility is based on the assumption of how easily the body switches between using carbs or fat for fuel, which is often talked about in keto and fasting diets. First of all, we know that carbs are the preferred source of fuel for our body and brain. Carbohydrates are broken down in the body into glucose, which is converted into the energy your brain and body needs to function. Second, the vast majority of research on fasting has been done in animals and the few human studies that exist are small and short-term and don’t take into account how fasting potentially increases the risk for developing eating disorders and impacts other aspects of mental health.

A recent randomized control trial concluded that dietary changes did not improve metabolic flexibility. The “healthy diet” used in this study followed a similar pattern as the one proposed by Cole in Intuitive Fasting. Based on this study, it seems like the claims behind Intuitive Fasting are not supported by research and instead are just biased assumptions.

How does this program claim to be intuitive?

According to Cole, Intuitive Fasting is a non-restrictive approach to help people listen to their bodies and intuition which leaves people free from stress and hunger.

Let’s break down this intuitive fasting approach and what meals looks like:

Cole is pairing these “flexible” fasting windows with a “clean” ketogenic diet. This diet is based on his last book titled Ketotarian, which is a mostly plant based diet high in healthy fats, moderate in protein and low in carbohydrates, emphasizing “clean” carbs.

Why Fasting is Not Intuitive or Flexible

How can setting specific time windows to eat or eating only two meals a day be flexible and intuitive?! And how about when you only have two hours a day to eat?! Seriously?! This is very disordered and sounds like a recipe for an eating disorder.

Let’s keep in mind that intuition is based on intrinsic signals and sensations and trusting your body on telling you when to eat. Fasting, on the other hand, is based on external protocols and rules that dictate when you should be eating. 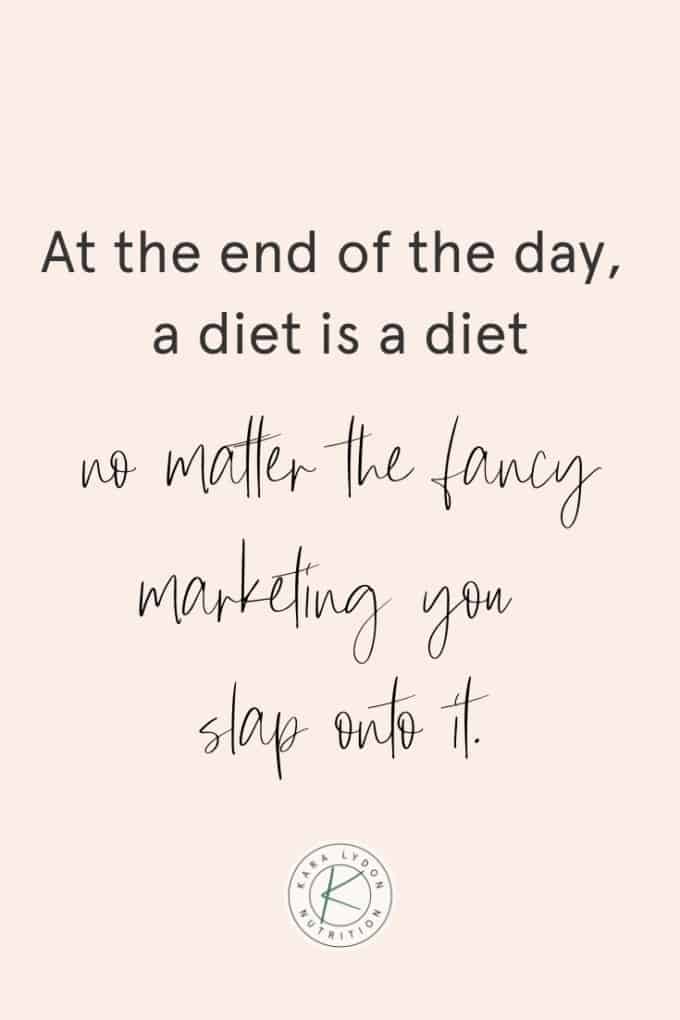 Moreover, flexibility refers to the ability to adapt your behaviors based on different factors such as your environment or mood. How could you do that in regards to eating if you have such specific time windows in which you are allowed to eat?

This program co-opted intuitive eating language such as listening to your body, as a way of promoting it as a wellness or lifestyle program, instead of just another diet. But at the end of the day, a diet is a diet, no matter how much fancy marketing you slap onto it.

The emphasis on “clean keto” and “clean carbs” also is extremely telling on what this “program” actually is. Food is food; there is no good or bad food just as there are no clean or dirty foods. When labeling foods or food groups, we are setting ourselves up for a restrictive mindset and not giving ourselves unconditional permission to eat, which is a key factor of intuitive eating.

Why Being Free from Hunger is Not Intuitive, But Actually Concerning

According to Cole, he wants people to “be free from hunger.” Intuitive eating, on the other hand, teaches us to listen for and honor our hunger. Encouraging people to be free from hunger feels like someone taking away your biological need and right to nourish yourself. Evelyn Tribole, MS, RD, Co-Author of Intuitive Eating, called intermittent fasting a “gateway to an eating disorder,” expressing concern that ignoring hunger cues to align with an eating window can be psychologically dangerous. 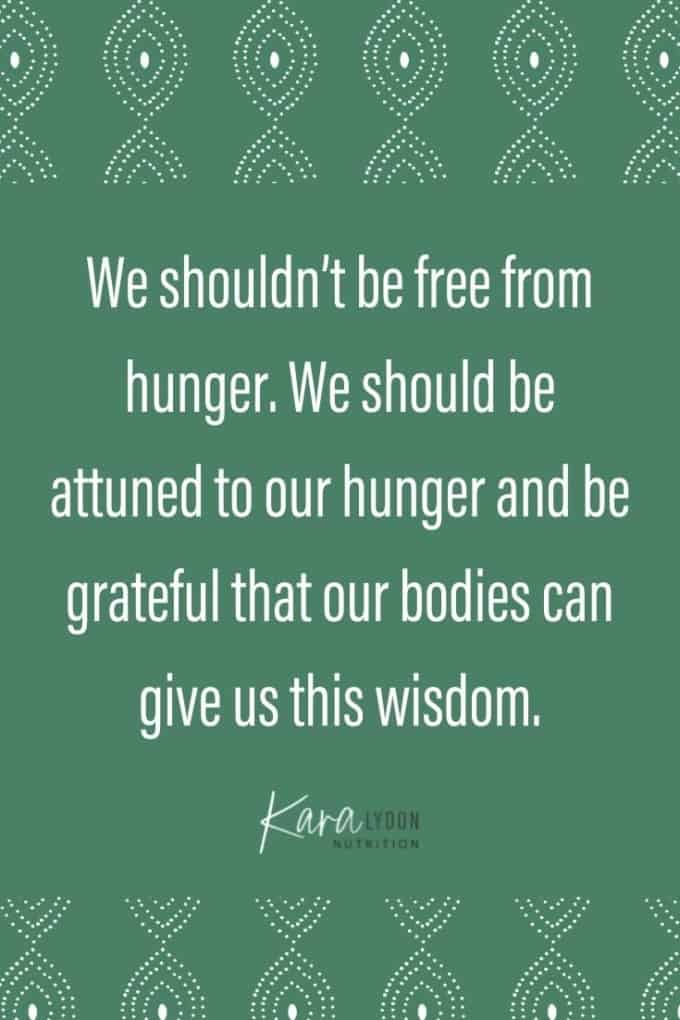 In diet culture, hunger is often thought of as bad and something you’d want to avoid. Because if you’re not hungry, you’re less likely to eat. And if you’re trying to diet, you probably don’t want to be eating as much. But hunger is a physiological cue that our body provides to let us know what it needs; just like when you feel the sensation to pee. Imagine if we attached morality to the sensation to pee like we do to hunger?! We shouldn’t be free from hunger – we should be attuned to our hunger and be grateful that our bodies can give us this wisdom.

Hunger is also a key factor in the binge-restrict cycle. Our bodies are really smart in telling us what they need to keep going but if you start ignoring its signals, it will backfire on you. The longer you restrict, the hungrier you become, and the probability of binge eating and overeating increases. And then someone might blame this cycle on hunger itself, wishing they could be free of hunger, when in reality, it’s not honoring their hunger that is causing the backlash.

Why Intuitive Fasting is Not Sustainable

According to Cole, The Intuitive Fasting plan is intended to make a difference after four weeks and be repeated thereafter. 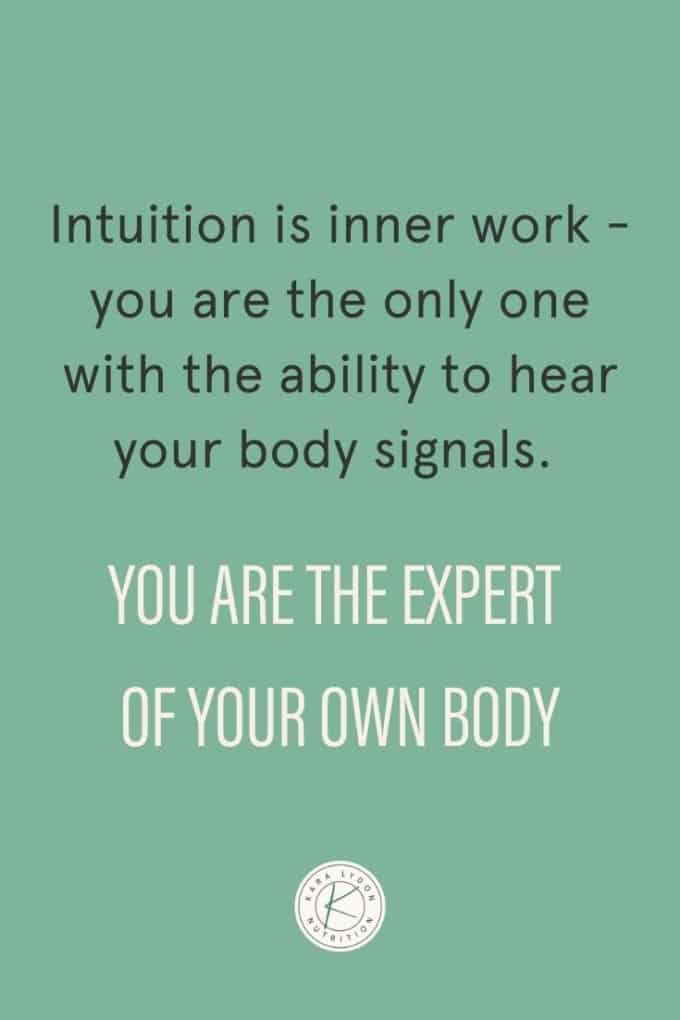 Any type of eating model that has a timeline is not sustainable in the long term. What happens after those four weeks?! The program literally says it’s intended to be repeated after four weeks. This is par for course for the diet industry – they want you to keep repeating their plans so you continue to buy their products and programs. It is a $78B industry that profits off knowing they have repeat customers for life.

I hope after reading this post you understand that any time a program asks you to count things—whether it be numbers, points, food groups, hours, or any time someone is telling you what you should or shouldn’t be eating, that it’s a diet. These arbitrary rules are inherently not intuitive and should never be framed as such. Remember, intuition is inner work -you are the only one with the ability to hear your body signals; you are the expert of your own body.

If you are interested in learning more about intuitive eating, make sure you are getting information from experts, not those who are co-opting the paradigm You could start by reading the Intuitive Eating book, 4th edition, written by Evelyn Tribole, MS, RDN, CEDRD-S and Elyse Resch, MS, RDN, CEDRD-S, FAND.