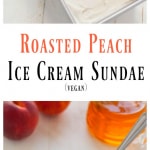 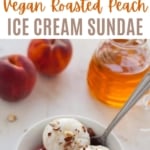 Rich, creamy, sweet and dairy-free! This vegan roasted peach ice cream sundae is the dessert you need to make summer last as long as humanly possible. 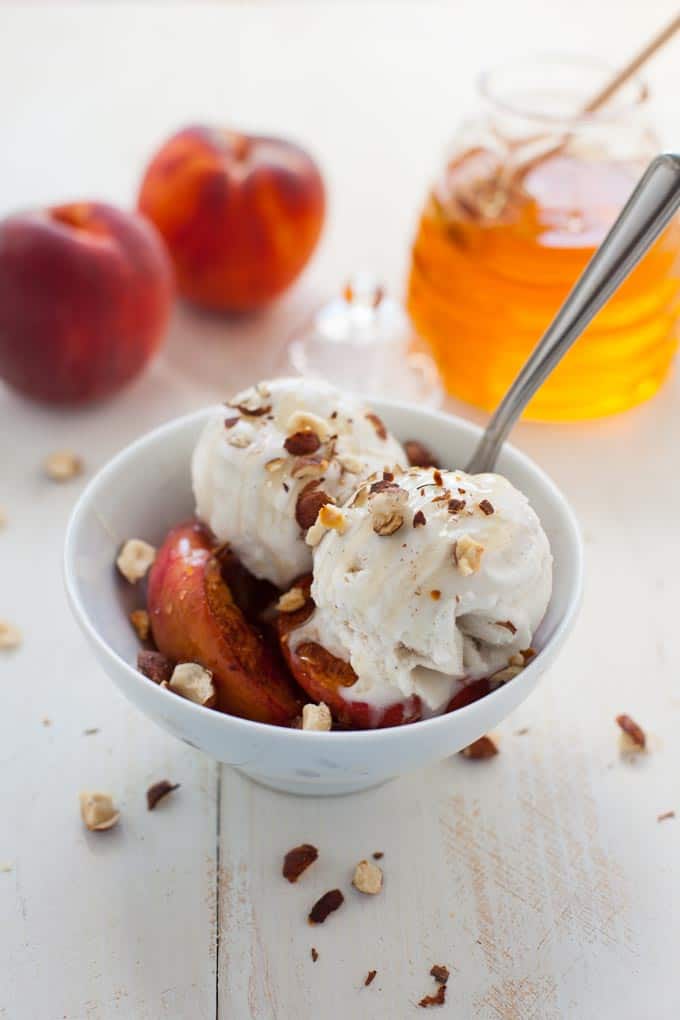 I Scream. You Scream. I Scream because we got an ICE CREAM maker at my bridal shower!

Guys, I have been dying to make an ice cream recipe for this blog for a long, long time. And now, thanks to my sister (and MOH), who knows me oh so well, I can make it! 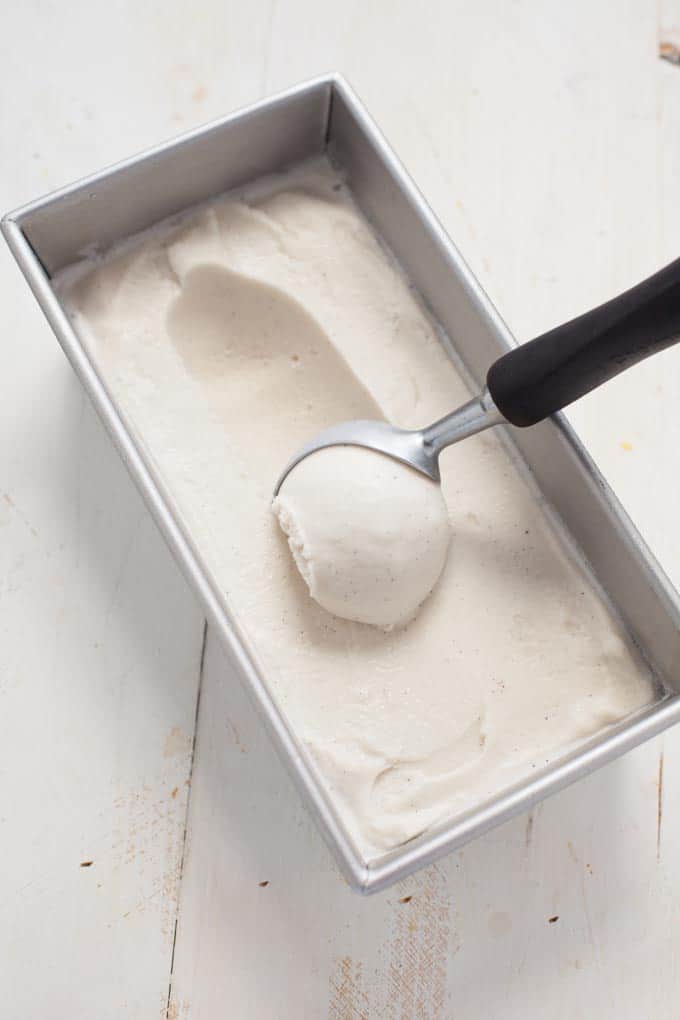 I didn’t realize ice cream making was such a process though! On a whim one wild Friday night at home, Steve suggested making some strawberry coconut milk ice cream with our new gadget. We hadn’t even opened up the Kitchen Aid Stand Mixer at the time (I have an ice cream maker attachment for it). But we were determined to make it – I mean what else would we do on a wild Friday night at home besides binge watch Making a Murderer (yes, we have a tendency to binge watch Netflix series months and sometimes even years after they are popular lol)? But when we opened up the directions, I quickly realized this wasn’t going to happen in a night. The freezer bowl alone had to be frozen for at least 15 hours prior to using. And then the ice cream mixture had to cool in the fridge for at least four hours before churning. I reiterate. A process. However, when the end result is homemade ice cream, you push through.

Now, I luuuuuuurve ice cream but ice cream don’t love me back. This unrequited love looks something like bloating and stomach cramps. Definitely not a romantic or sexy kind of love. This is why I was super excited to make ice cream at home so I could make dairy-free ice cream using coconut and almond milks. Now, perhaps you’re thinking, but Kara, you know they sell dairy-free ice cream at the grocery store and now at ice cream shops? Yes, I know all too well but whatever stabilizers, preservatives and thickeners they use to make it, also doesn’t agree with my tum tums. So, homemade ice cream is the answer to all my dairy-free dessert dreams. 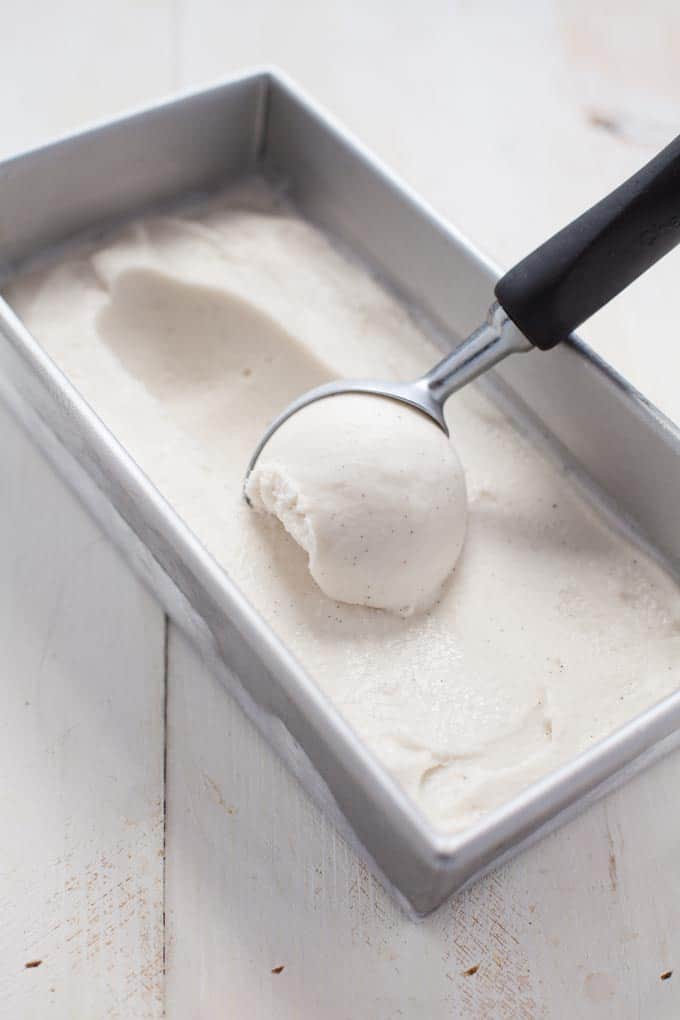 And let me telllllll you. This vanilla coconut ice cream is off the CHARTS. Especially when it was a soft-serve consistency right after churning. I could’ve easily eaten the entire batch. And it was 9am on a Wednesday. You know you’ve made the right career choice when you get to make and eat ice cream in the morning on hump day. 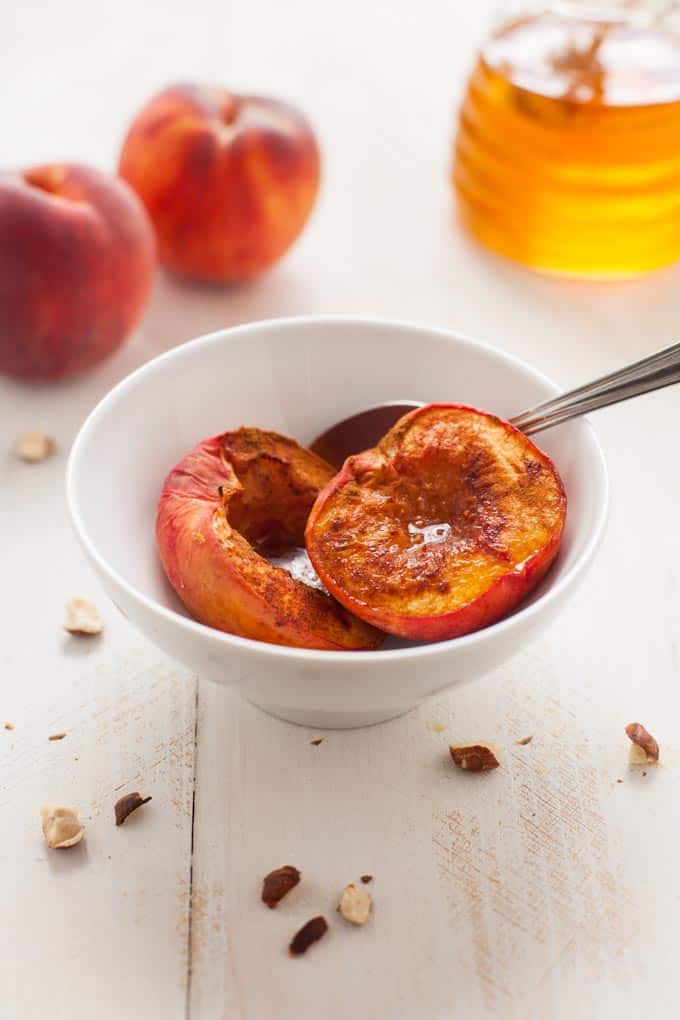 But of course, I wanted to make more than just vanilla coconut milk ice cream because…it’s been done before. So enter, a seasonal, healthier sundae made with vegan ice cream. Roasted peach ice cream sundae. Peaches are in-season right now (July – Sept) and they are extra sweet and juicy when roasted in the oven (or you could fire these babies up on the grill, too!). Rich, creamy vanilla ice cream and juicy, sweet peaches topped with a nutty crunch of toasted hazelnuts. You aren’t going to want to eat any other dessert the rest of the summer. Trust me. 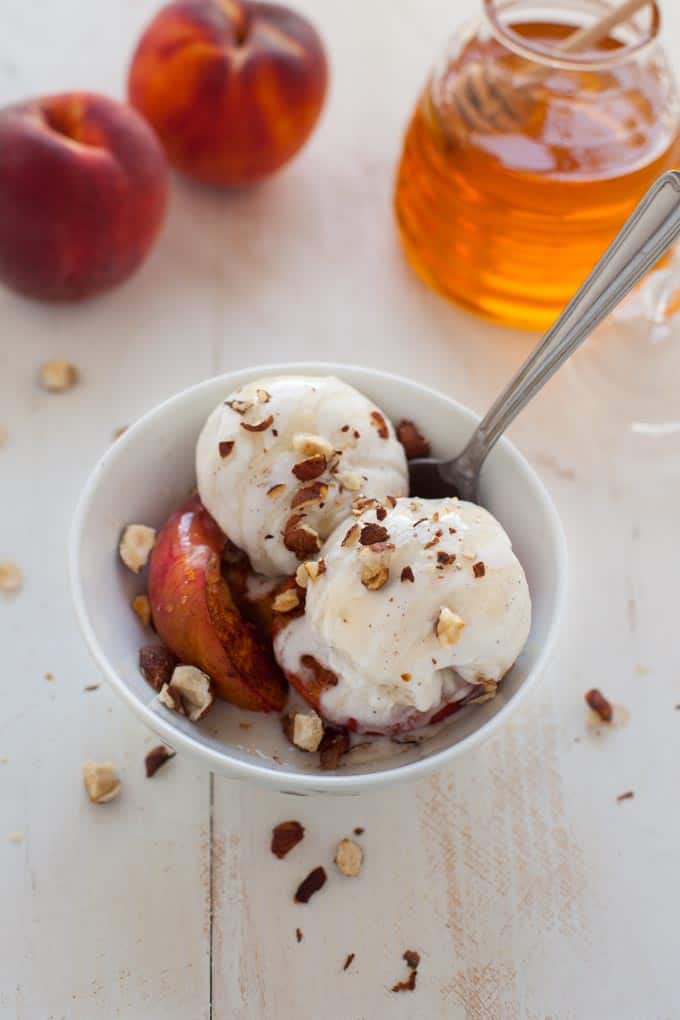 If you’re a vegan who doesn’t consume honey, replace honey with agave syrup or coconut sugar.

So this is going to be the last post from me before I head off to wedding and honeymoon land! I can’t believe it’s here! I’m so excited to marry my best friend and celebrate our love with our closest family and friends…and eventually share the special day with you all here on the blog!

If you want to follow along the festivities during labor day weekend, search the #HappilyEverEvancho.

We’ll be off to Buffalo, NY for the wedding and then to Greece for our honeymoon! I have a couple awesome interns who are going to pop on the blog over the next few weeks while I’m gone to say hi and share some delicious fall recipes with ya’ll (can you believe it’s almost time to start eating apples and pumpkin?!). WHOA.

And then I’ll be back mid-September to share all the honeymoon and wedding recaps with you! Enjoy these last few weeks of summer, friends! XOXO